For relapsed/refractory acute myeloid leukemia (R/R AML), treatments used include high-intensity cytotoxic chemotherapy regimens (HIC); low-intensity chemotherapy (LIC); targeted therapies administered as either a single agent or as part of combination therapy; or venetoclax, often in combination with LIC. As options increase for patients with R/R AML, an understanding of the real-world health care resource use (HRU) and costs associated with different treatment regimens is needed.

We described HRU and costs associated with HIC alone, LIC alone, and select novel, orally administered therapies (alone or in combination with chemotherapy) to better understand HRU and costs of first salvage therapy for AML.

This was a retrospective analysis using the IBM MarketScan® database which contains medical and drug data from ~40 million people annually who are covered by employer-sponsored private health insurance in the United States. The time frame for this claims analysis was 1/1/2017-12/31/2019. HRU and costs were estimated for 5 mutually exclusive treatment groups: HIC alone, LIC alone, gilteritinib, other FLT3 tyrosine kinase inhibitors (TKIs), and venetoclax. Gilteritinib, other FLT3 TKIs, and venetoclax treatments could be single-agent or in combination with chemotherapy. Patients aged ≥18 years at AML diagnosis with continuous health plan enrollment for ≥180 days prior to first AML diagnosis and through start of first salvage therapy were included in the analysis. Evidence of R/R AML was determined by diagnosis code and use of a treatment-based algorithm (Grinblatt DL, et al. Blood. 2020;136[Suppl. 1]:24-25). Descriptive statistics were used to characterize baseline patient demographic and clinical characteristics and HRU and costs through treatment. HRU and costs were reported as per-patient per-month (PPPM). 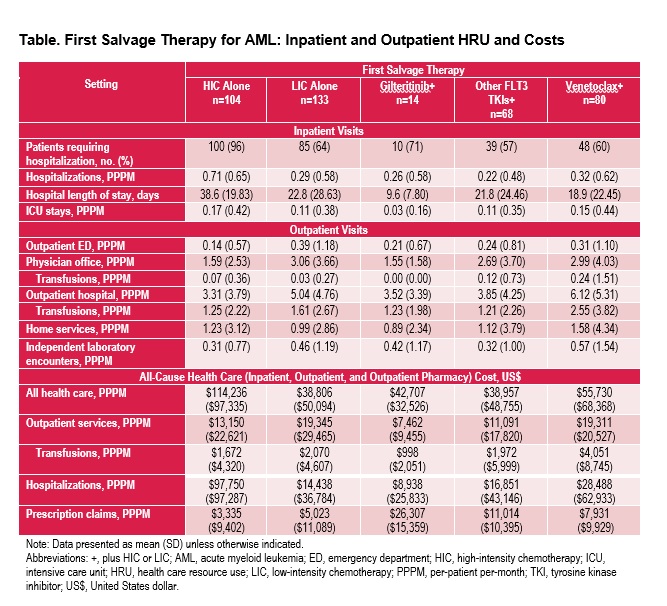