Little is known about the burden of symptoms and impacts on quality of life in patients with AML in the posttransplant period. As treatment options for AML increase, it is vital that the patient experience be considered when making treatment decisions. Qualitative methods, largely underutilized in hematologic malignancy research, help capture the patient voice and provide insights into signs, symptoms, and impacts that are most relevant to the patient experience and yield valid results with small sample sizes.

To gain a deeper understanding of the patient experience in the AML posttransplant period, we conducted patient interviews to identify the most bothersome symptoms and impacts on patients’ lived experiences with AML.

Patients diagnosed with AML and currently in remission ≥90 days posttransplant and <1 year from the transplant date were recruited for the study. The number of patients interviewed was estimated based on the projected number of patients needed to reach concept saturation (ie, the point at which no new symptoms or concepts are identified during patient interviews). An interview guide was developed that included a list of bothersome symptoms and life impacts that were identified during a prior study enrolling patients with relapsed/refractory AML and refined for the posttransplant population based on results from a literature review and discussions with clinicians. One-on-one concept elicitation interviews were conducted via telephone in 4 waves. Patient disease experiences were explored, particularly those symptoms and impacts most important to patients during the posttransplant period. Interviews lasted 60 to 90 minutes and were conducted in line with the International Society for Pharmacoeconomics and Outcomes Research Good Research Practices Task Force recommendations. Interviewers asked a series of open-ended questions to elicit spontaneous responses and included prompts to probe patient understanding and experiences in greater depth. When interviewed, patients were asked to rate their symptoms/impacts on a scale of 0 to 10, with 10 being the most bothersome/impactful. Salient symptoms and impacts were those reported by ≥50% of respondents as relevant either spontaneously or upon probing and rated most impactful (average rating of ≥5).

Twenty patients who were in complete remission posttransplant were interviewed. Median age of patients was 59.5 years and 55% of patients were female. Seventeen patients were confirmed FLT3-mutation–positive. Symptom saturation was reached in wave 1 (42 total concepts), with 13 new symptoms identified. Impact saturation was reached in wave 2 (28 total concepts), with 12 new impacts identified. During interviews, patients mentioned both positive and negative impacts. Mean peak symptom scores are shown in Figure A. Salient symptoms identified were fatigue, weakness, nausea, pain, and diarrhea. The disturbance ratings for most salient symptoms decreased from the peak to the current rating, suggesting that symptoms were less bothersome over time. Mean peak impact scores are shown in Figure B. Salient impacts included 1 positive impact (life outlook) and 6 negative impacts (fear, decreased ability to maintain roles, anxiety, appetite loss, decreased ability to function, and change in appearance). Impacts were generally more stable over time than symptoms in terms of their disturbance to patients. 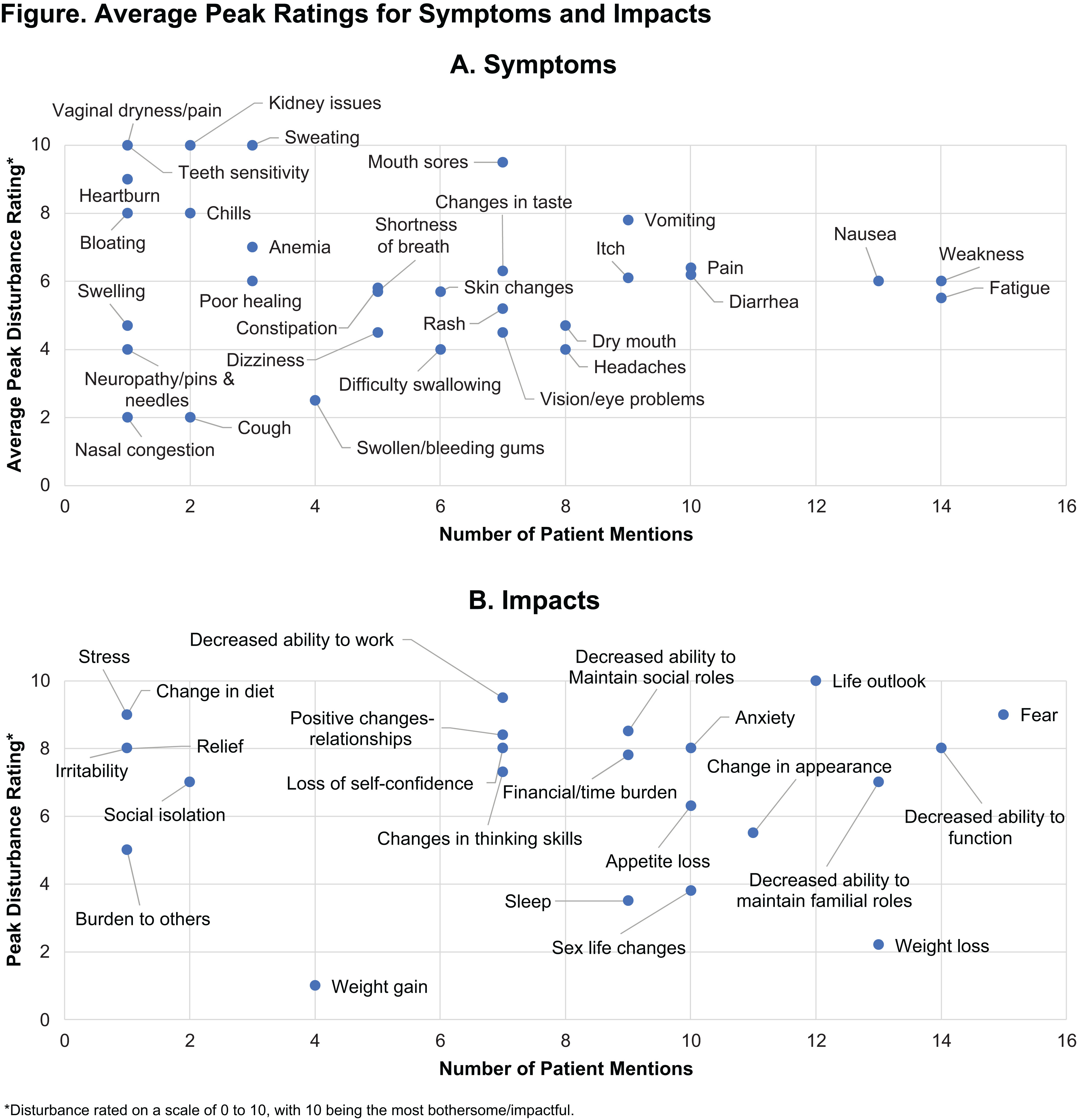