Introduction: In 2010 the French Health Agency opened a compassionate patient named program of gemtuzumab ozogamicin (GO, Mylotarg®) in relapsed/refractory (R/R) patients with acute myeloid leukemia (AML). Of note, since 2012, it was recommended to use GO at the dose of 3 or 6 mg/m2 in addition to chemotherapy. We conducted a retrospective trial (NCT03287128) to evaluate the efficacy and the safety of GO-based regimen in R/R adult AML patients.

Patients and methods: We retrospectively collected data of patients older than 18 years treated with GO-based regimen for AML in first relapse or for refractory AML, defined by failure after a prior standard intensive chemotherapy, in 18 French centers between December 15, 2011 and November 10, 2016. The primary objective was to assess the response to GO-based regimen. Patients were considered in response if reaching complete remission (CR), CR without platelet recovery (CRp) or CR with incomplete hematological recovery (CRi). Secondary objectives were the cumulative incidence of allogeneic hematopoietic stem cell transplantation (allo-HSCT) and the safety of the use of GO-based regimen.

Results: Three hundred and thirty-five adult patients with R/R AML were included. Median age was 58 years (20 to 80 years). At diagnosis, cytogenetics was favorable in 50 (17%) patients, intermediate in 173 (59%) and adverse in 60 (20%). ELN distribution was favorable: 35%, intermediate: 42% and unfavorable: 23%. NPM1 mutation was present in 29% of patients and FLT3 mutation in 23%. Most patients had de novo AML (84%). Two hundred and thirty-eight patients (79%) were in first relapse and 65 (21%) had a refractory AML. The time between first diagnosis of AML and treatment with GO-based regimen was 4 to 16 months (median 9.4 months). Most patients (88%) received GO in combination with various intensive chemotherapy scheme including “7+3” with anthracycline/cytarabine (n=39 patients), intermediate and high-dose cytarabine (n=68), cytarabine in continuous intravenous infusion (n=78), mitoxantrone/cytarabine (n=49) and fludarabine/cytarabine and/or amsacrine and/or etoposide chemotherapy (n=35). Median follow-up time was 11 months.

Among the 305 patients, 191 responded to GO-based regimen: 110 (36%) were in CR, 62 (20%) were in CRp and 19 (6%) in CRi for an overall response rate (CR+CRp+CRi, ORR) of 63%. In multivariate analysis, response was associated with age <50 years, de novo AML and relapse status. Among the 191 responders, 110 received additional courses of chemotherapy, 69 with GO. Main reason to not receive additional course (with or without GO) was allo-HSCT project. In the whole population, median overall survival (OS) after day 1 of treatment with GO was 11.2 months. In the population of responders, median OS after response was 20.4 months. In multivariate analysis, longer survival was associated with age < 50 years, de novo AML and favorable ELN group. Cumulative incidence of relapse at 24 months after response was 46%. One hundred and forty-seven patients received allo-HSCT, including 122 responders after GO-based regimen and 25 patients in treatment failure. Cumulative incidence of allo-HSCT at 18 months was 48%. Four-year OS was 48% in transplanted patients versus 19% in non-transplanted patients (Figure 1).

Regarding safety of GO-based regimen, early deaths occurred within <30 days after the first dose of GO in 14 patients, and within <60 days in 35 patients. Myelosuppression was observed in all patients. Mean duration of thrombocytopenia <100 G/L was 35 days in responders. Bleeding grade 3 or more was observed in 22 patients (7%). Infection grade 3 or more was observed in 112 patients (30%). Sinusoidal obstruction syndrome (SOS) after GO treatment was reported in 6 patients, resolving in 4 of them. Four cases of fatal SOS were reported after allo-HSCT. Toxic deaths, i.e., not related to worsening leukemia, were reported in 20 patients after the first course of chemotherapy, 3 after additional courses and 33 after allo-HSCT.

Conclusion. Our study is the first to report efficacy data in the real-world setting of R/R AML adult patients treated with GO-based regimen. In our cohort of 305 patients, response rate was 63% and GO-based regimen appears as a valuable bridge-to-transplant option. Safety analysis showed toxicities consistent with the known safety profile of GO and chemotherapy. 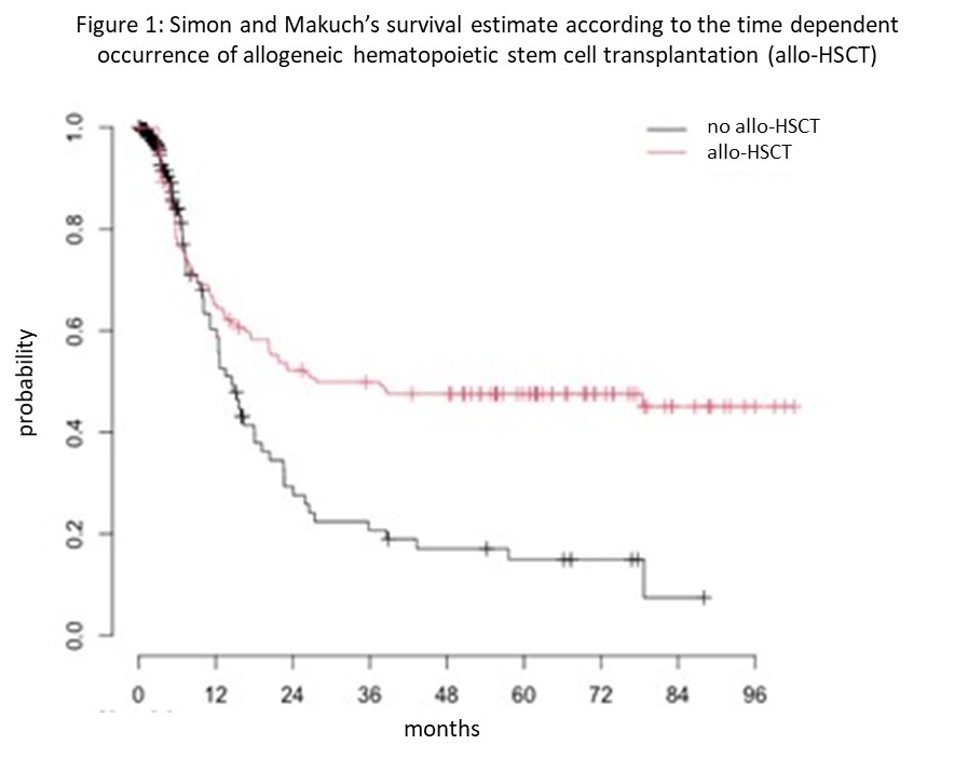