Based on the results of the ALFA-0701 trial (Castaigne et al. Lancet 2012), the addition of fractionated doses of the anti-CD33 antibody drug conjugate gemtuzumab ozogamicin (GO, Mylotarg®) to conventional chemotherapy has been approved in 2017 for frontline treatment of adults with CD33-positive acute myeloid leukemia (AML). Prolonged event-free survival (EFS) was observed in patients with AML of favorable or intermediate risk, while not in those with adverse cytogenetics. Nevertheless, more frequent added toxicities could make the addition of GO a questionable option in patients over 60-65 years of age. In this ALFA-1401/Mylofrance 4 trial (NCT02473146), we investigated if the replacement of the anthracycline by GO might also improve EFS in older patients.

Between January 2016 and March 2019, 225 patients were randomized 2:1 to receive an experimental GO-cytarabine combination (154 patients) or a standard anthracycline-cytarabine treatment (71 patients). Patients aged 65 to 80 years old (later extended to patients aged 60-64 years old), with previously untreated de novo AML of favorable or intermediate cytogenetics were eligible for the trial. Standard treatment arm consisted in a 7+3 using idarubicin at 12 mg/m2/d on day 1 to 3 and cytarabine 200 mg/m2/d on day 1 to 7. Experimental arm (GO arm) consisted of two doses of GO 3 mg/m2/d on day 1 and 4 and cytarabine 200 mg/m2/d on day 1 to 7. Post-remission therapy comprised two courses of intermediate-dose cytarabine (IDAC) at 1.5 g/m2/12h on day 1, 3 and 5. In the GO arm, a third dose of 3mg/m2/d GO was administered on day 1 of the first IDAC course. The first IDAC course could serve as second induction in patients not responding to the first one. The decision to perform allogeneic hematopoietic stem cell transplantation (allo-HSCT) in first remission was left to the discretion of the physician. The efficacy analysis was conducted in the modified intent-to-treat (mITT) population excluding patients who did not meet the cytogenetic eligibility criteria. The primary study endpoint was EFS. Secondary endpoints were response rate defined by complete remission (CR), CR with incomplete platelets recovery (CRp) and CR with incomplete hematological recovery (CRi), early mortality, relapse incidence, overall survival (OS) and safety.

Frontline use of GO instead of idarubicin, when combined to cytarabine, does not benefit older patients with de novo standard-risk AML. At the reduced dose schedule used in this study, GO remains associated with significant toxicities while non-significant higher relapse incidence, shorter EFS and shorter OS were observed. 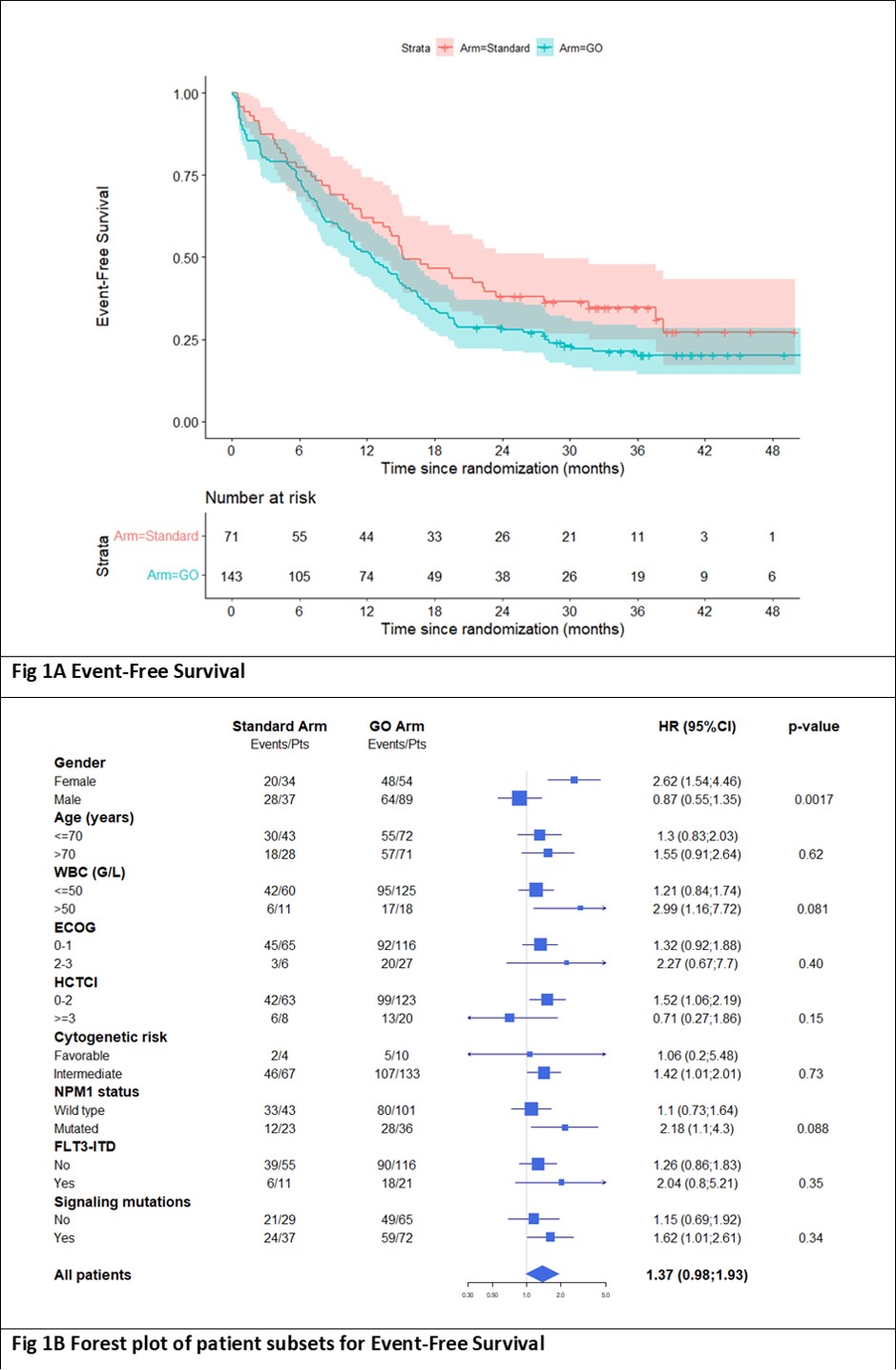