DDX41 gene is located on chromosome 5q35 and is believed to be a tumor suppressor gene involved in splicing of mRNA. Mutated DDX41 have been identified as germline mutation (m) in families with cases of myeloid neoplasm and have shown to cause acquisition of other somatic mutations resulting in MDS/AML. At the same time, somatic pathogenic DDX41 mutations are known to occur. Variant of unknown significance (VUS) is an intermediate tier between benign and pathogenic (path) mutations (hence uncertain) and can be re-classified based on their clinical impact. In this report we analyzed the clinical impact and relevance of DDX41VUS in patients (pts) being evaluated for myeloid disorders.

Baseline characteristics are summarized in Table 1, and Figure 1 illustrates DDX41VUS per case with variant allele frequency (VAF) and observed concurrent mutations. The median VAF for DDX41VUS was 48 % (range, 14-91%). Co-mutations were found in 14 (28%) pts with VUS, and the reminder (n=44, 72 %) had isolated DDX41VUS. Among them AML (16 [32%]), MDS (14 [28%]), cytopenia (14 [28%]) MPN (3 [6%]), CNL (1 [2%]) and aplastic anemia (1 [2%]) were the commonly occurring myeloid disorder (Table 1, Figure 1). Eleven of 14 pts with isolated cytopenia had isolated DDX41VUS. Conversely, among 15 evaluable pts with isolated DDX41VUS, 13 (87%) pts had normal cytogenetics and 40% of pts had family history of solid or hematological malignancies. We observed a significant difference in hematologic diagnoses: DDX41VUS patients were significantly less often diagnosed with MDS or CCUS, and more often associated with cytopenias NOS.

Our reports demonstrated that DDX41VUS occurs in 1% of patients with myeloid disorders and shares distinct diagnostic features but comparable prognostic features vs. DDX41path, including family history of hematological malignancies. It is possible that many of the cases with ‘cytopenias’ and DDX41VUS would meet criteria for CCUS if the variant was isolated classified as pathogenic, confirming the importance of extending our understanding of DDX41 variants. Further analysis to characterize the biological impact of DDX41VUS is underway. 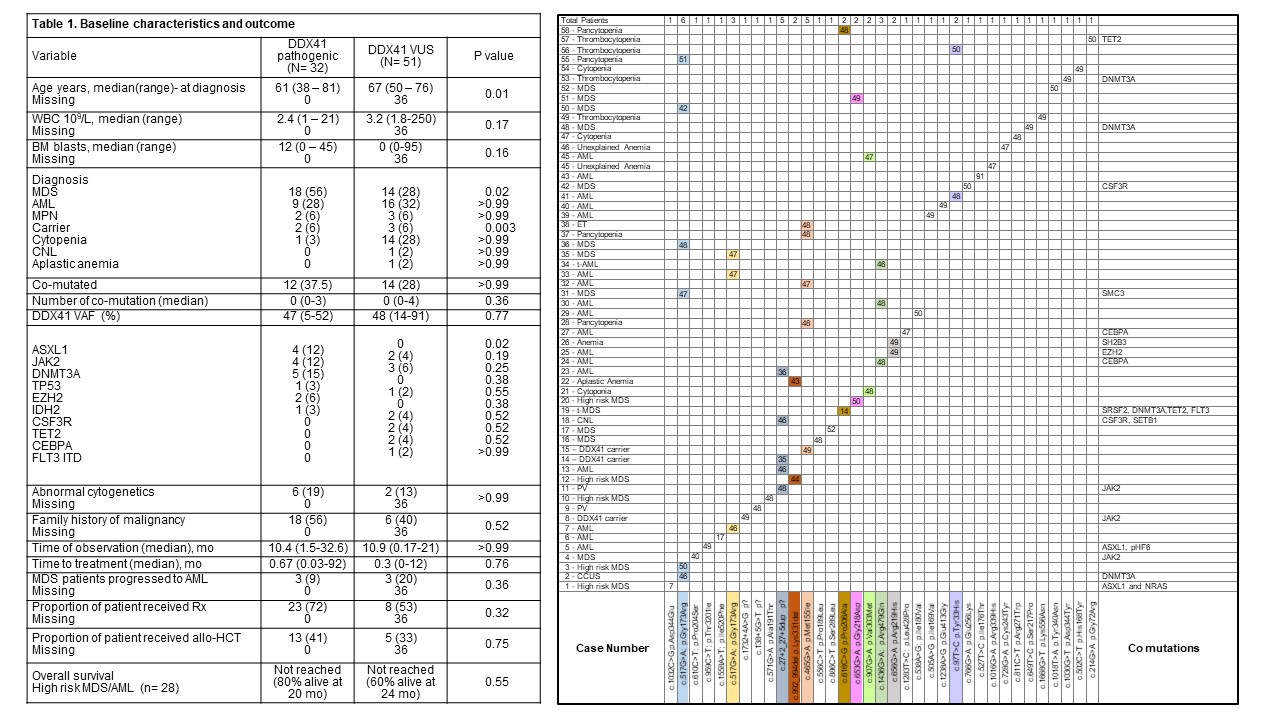