Unexplained peripheral blood cytopenia remains a challenge in clinical practice which requires sorting through an array of etiologies from transient abnormalities to premalignant conditions. Clonal hematopoiesis has established an association between cytopenia and hematologic cancer, likely caused by inflammatory responses leading to hematopoietic stress. Similar mechanisms may occur in other organ systems and lead to neoplasia as the link between inflammation and solid tumors is well known. Thus, cytopenia may represent an early marker of serious conditions, including malignancy. Using the REasons for Geographic and Racial Differences in Stroke (REGARDS) cohort study, we studied the association between cytopenia and cancer mortality.

REGARDS prospectively enrolled 30,239 US black and white adults from 2003 to 2007 (41% black). Sociodemographic and medical data were obtained by phone interview, physical exam, and laboratory studies at enrollment (baseline CBC drawn after 8,000 people were recruited). Cancer death was identified via semiannual phone follow-up through 2018 to ascertain health events and linkage with Social Security Death and National Death Indexes. Cytopenia was defined as presence of 2 or more of the following: 1) hemoglobin below age, sex, and race-specific lowest 5th percentile, 2) white cell count below race-specific lowest 5th percentile, 3) platelet count below lowest 5th percentile, and 4) macrocytosis (MCV >98fL). Participants with baseline cancer, missing CBC, or lost to follow-up were excluded. Cox proportional hazards models were used to calculate hazard of cancer mortality associated with cytopenia, adjusting for demographics (Model 1), Model 1 + risk factors for cancer/anemia (Model 2), and Model 1 + socioeconomics (Model 3). Differences in the association of cytopenia and cancer death by race was tested by cross-product interaction terms and Inverse Odds Ratio Weighting (IORW) mediation analysis was conducted to study the effect of cytopenia as mediator in the race-cancer death interaction.

The analysis population included 19,028 participants, 62% were female and 60% were white. Median follow up was 9 years. There were 1112 (5.8%) cancer deaths and 3725 (19.6%) deaths from other causes. Cytopenia was present in 383 (2%) participants, of which 250 (65%) were white and 113 (35%) were black. Cytopenia prevalence increased by age and was higher in males (56%). Cytopenia was associated with increased risk of cancer mortality in all multivariate models adjusting for demographics (HR=1.60, 95%CI 1.16-2.21), cancer risk factors (HR=1.67, 95%CI 1.2-2.32), and socioeconomics (HR=1.58, 95%CI 1.12-2.23). Anemia and macrocytosis, but not leukopenia and thrombocytopenia, were hematologic parameters individually associated with risk of cancer death (Table 1). The 10-year cumulative incidence of cancer death was 13% for participants with baseline cytopenia vs. 6.5% for those without cytopenia (p<0.01, Figure 1). The race by cytopenia interaction term was significant with higher HR for cancer mortality in blacks compared to whites in all models: 2.01 vs 1.41, p=0.016 in model 1 (demographics), 2.12 vs 1.45, p=0.009 in model 2 (cancer risk factors), 1.82 vs 1.44, p=0.04 in model 3 (socioeconomics). Anemia and macrocytosis were individual hematologic parameters with higher HR for cancer death in blacks compared to whites and significant race by cytopenia interaction terms across all models (Table 2). Mediation analysis by IORW method showed that cytopenia was not a significant mediator in the pathway between the race and cancer death association (not shown).

In a large biracial prospective cohort, cytopenia was associated with increased risk of cancer mortality after adjusting for demographics, socioeconomics, and cancer risk factors. Cytopenia was a race-specific risk factor for cancer death affecting blacks more than whites, but not a mediator of the race and cancer death association. We conclude that 1) cytopenia is a risk factor for cancer death, with stronger association in blacks than whites, and 2) race is an effect modifier for the association of cytopenia with cancer death, but cytopenia is not a mediator of the black to white difference in cancer mortality. These results can inform further studies aimed at clarifying racial disparities in cancer death through theorized mechanisms such as clonal hematopoiesis. 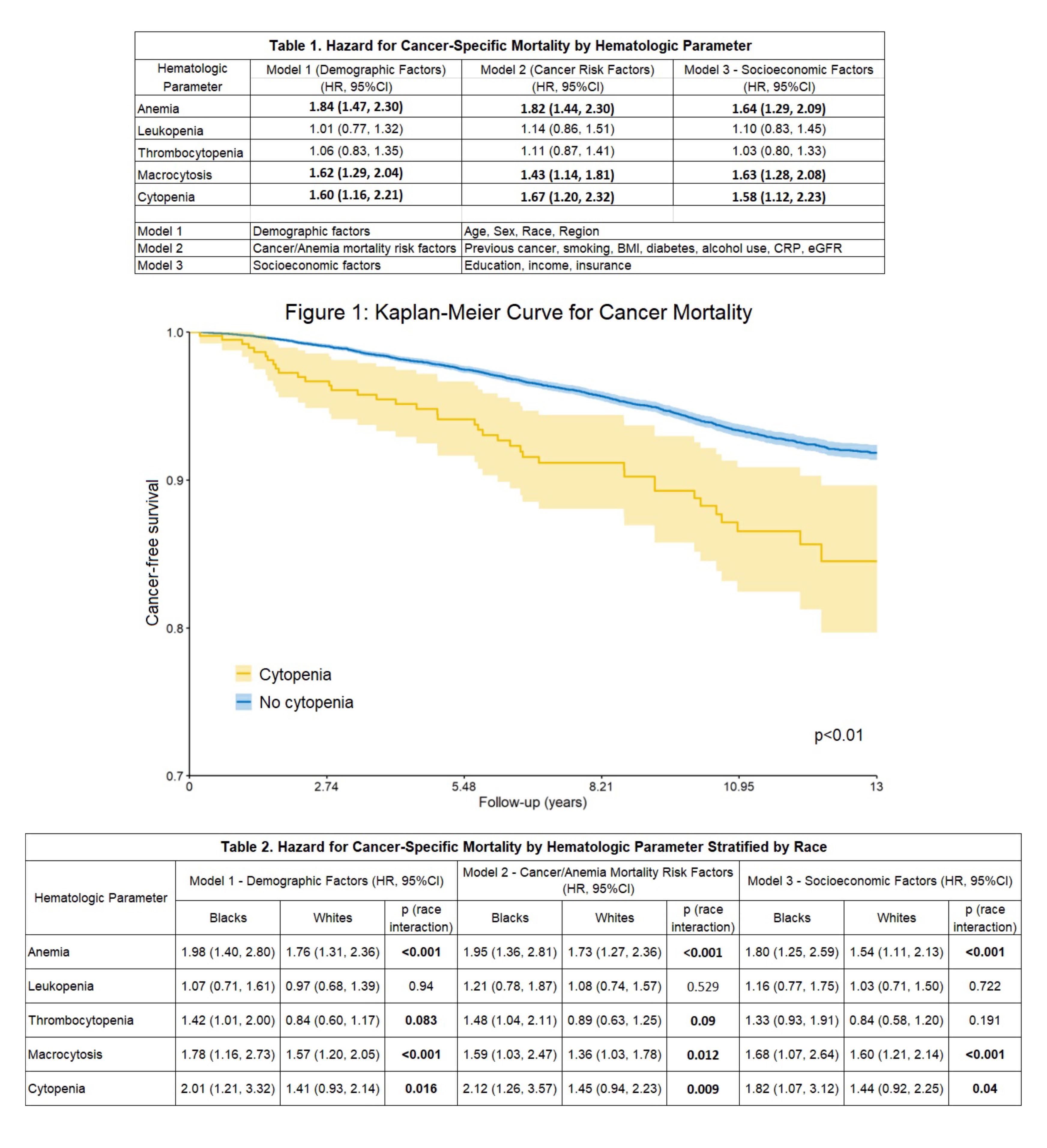