Introduction
Prednisolone has important potential side-effects, one of which is steroid-induced diabetes mellitus (DM). Due to the exposure to a high cumulative dosage of steroids during first-line treatment, patients with non-Hodgkin lymphoma (NHL) could face increased risk of new onset steroid-induced DM or dysregulation of a pre-existing DM. This nationwide observational cohort study evaluated the risk of new onset DM in lymphoma patients and the impact on pre-existing DM in lymphoma survivors following treatment with steroid-containing regimens.

Methods
Adult NHL patients (≥18 years) treated with ≥3 cycles of steroid-containing immunochemotherapy, such as R-CHOP(-like) and R-CVP, between 2002 and 2015 were identified in the Danish Lymphoma Register and matched to five random individuals from the general population on birth year, sex, Charlson Comorbidity Index score, baseline DM status (DM or not), and DM duration. NHL patients and matched comparators were followed from start of treatment for the patients until the event of interest (DM, insulin prescription), death, relapse, NHL diagnosis (for matched comparators), or censoring (emigration, missing, or end of study on 31 December 2018), whichever came first.
DM was captured by either a diagnosis of any DM (ICD-10 codes: E10-E14) in the Danish National Patient Register or any redeemed anti-diabetic prescription registered in the National Prescription Register (insulin or oral anti-diabetic medicine; ATC A10A or A10B). In the analysis of insulin prescriptions following lymphoma treatment initiation, patients with any redeemed prescription of insulin prior to start of lymphoma treatment were excluded.
Time-varying incidence rates (IRs) per 1,000 person years and incidence rate ratios (IRRs) with 95% confidence intervals were estimated using a spline-based Poisson regression approach with two-month time splits and five knots. The Aalen-Johansen estimator was used to compute the cumulative risk of an event treating death, relapse, and NHL diagnosis (in comparators) as competing events. Risk differences at specific time points were calculated using pseudo-observations. Crude and adjusted cause-specific hazard ratios (HR) were obtained using Cox regression.

Conclusion
In conclusion, patients treated with steroid-containing immunochemotherapy did not experience a higher risk of diabetes mellitus compared to matched comparators beyond the first year. Matched comparators had a higher cumulative incidence of diabetes mellitus after 2 years, which was partly explained by the high competing risk of death in the patient group.
NHL patients with pre-existing non-insulin dependent diabetes mellitus had an increased cumulative incidence of any insulin prescriptions; however, the difference was diminished when assessing the risk of at least five insulin prescriptions, suggesting that the impact of steroids on diabetes regulation is limited in time when taking competing risks into account. 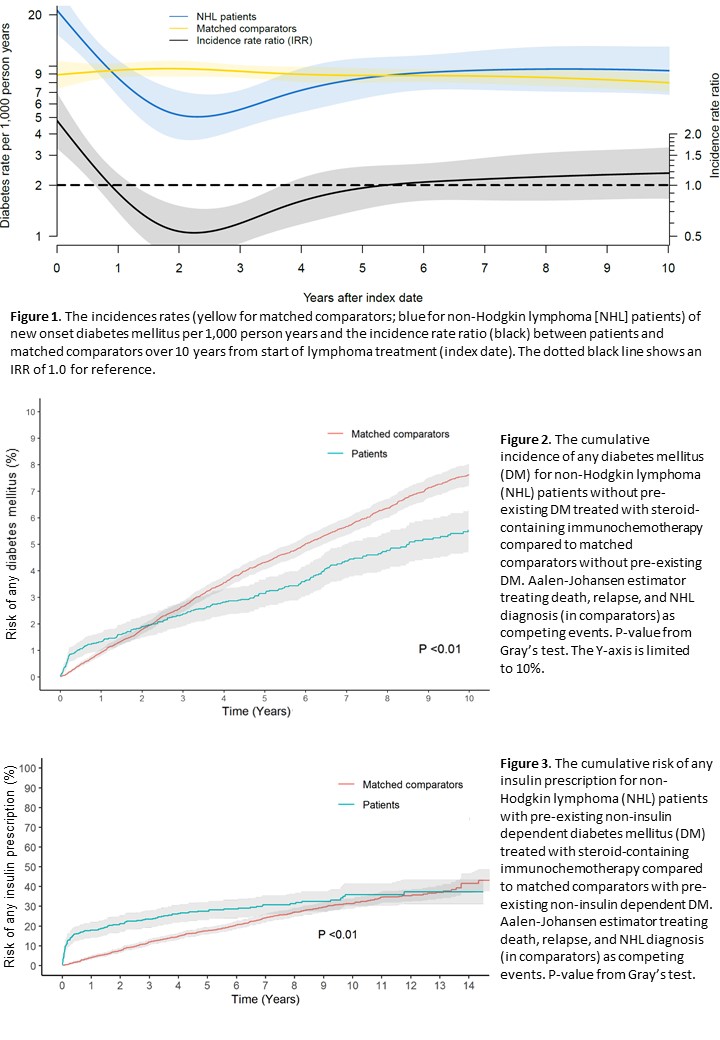