3685 Clinical Efficacy Analysis of the Low-Dose Decitabine in Combination with Cytarabine, All-Trans Retinoic Acid and Granulocyte Colony-Stimulating Factor for Patients with MDS-EB

Treatment of patients with myelodysplastic syndromes with excess blasts (MDS-EB) remains a great challenge. In this study, we evaluated the tolerance and efficacy of the combination of low-dose decitabine, cytarabine, all-trans retinoic acid and granulocyte colony-stimulating factor (DLAAG) for MDS-EB patients.

A total of 18 patients (11 males, 7 females) with a median age of 61 years (range 45 to 88 years) were enrolled in our study. The clinical characteristics of the patients were shown in Table 1.

The clinical outcome and overall survival (OS) of patients were summarized in Table2 including 1 could not evaluable after the first protocol. As shown in Table3, after one course of DLAAG, the CR and OR rate was 55.56% and 77.78% respectively. In addition, 3 patients suffered the disease progression (PD) (n=3,16.67%). We found that those who achieved the bone marrow remission after DLAAG had significantly pro-longed OS than others (p=0.0001, Fig.1). The Kaplan-Meier analysis revealed the median overall survival for all patients enrolled was 15 months (Fig.2A), and the relapse-free survival (RFS) for patients achieving CR or CRm was 11 months (Fig.2B).

Genetic mutations and response to DLAAG

Paired samples (pre- and post-treatment) of the objects were tested for gene mutations which were recurrently mutated in myeloid malignancies, except 1 patient who was failure to perform bone marrow review. 2 patients (11.1%) had no genetic or cytogenetic abnormalities either at baseline or during therapy (they were tested at baseline and d28). Most patients (15 out of 18) had at least one somatic mutation. In this latter group, only 1 patient acquired specific mutation of IDH2 during the therapy (it was tested on d28, data was not shown), while all the other genes were mutated in patients at baseline. Collectively, the most frequently mutated genes at diagnosis were RUNX1 (n=5, 29.4%), ASXL1 (n=4, 23.5%), as well as the overexpression of WT1 (n=4, 23.5%), and the others with an incidence of more than 10% were TET2(n=3,17.6%),TP53 (n=2, 11.8%), EZH2 (n=2, 11.8%), STAG2 (n=2, 11.8%), SF3B1 (n=2, 11.8%) and U2AF1 (n=2, 11.8%).Genes less frequently mutated such as CEBPA,CUX1 et al. were not shown. Remarkably, the proportion of patients with the above gene mutations showing no significant increasing during therapy as compared to baseline, the clones of WT1/TET2/TP53/EZH2/STAG2 can decrease or even disappear(Fig.3A).Moreover, we noted the complete response in patients with ASXL1, TP53 mutations or WT1 overexpression despite the concomitant presence of complex cytogenetic at diagnosis, whereas patients with the EZH2 mutation were less likely to respond (Fig.3B).

A subgroup analysis based on the 2016 WHO classification revealed an association of EB-I patients with longer OS(P=0.002) (Fig. 4A). On the other hand, based on the IPSS score our study revealed that the lower-risk group patients have better OS (p= 0.0054) (Fig. 4B).In addition to this, we also compared the OS in different groups of age and karyotype, but there were no statistical difference (Fig. 4C-D).

All patients who received the therapy were eligible for toxicity evaluation. Given the patient-population enrolled and treatment regimen, myelosuppression occurred in all patients (Table 4). The grade 3 to 4 hematological toxicities including neutropenia and thrombocytopenia were common after treatment. Febrile neutropenia occurred in 77.8% of the patients.

Conclusion: This study suggested the novel combination of LD-DAC, Ara-C, ATRA and G-CSF might be an optimal introduction therapy for patients with MDS-EB, and this combination warrants further investigation in larger trials. 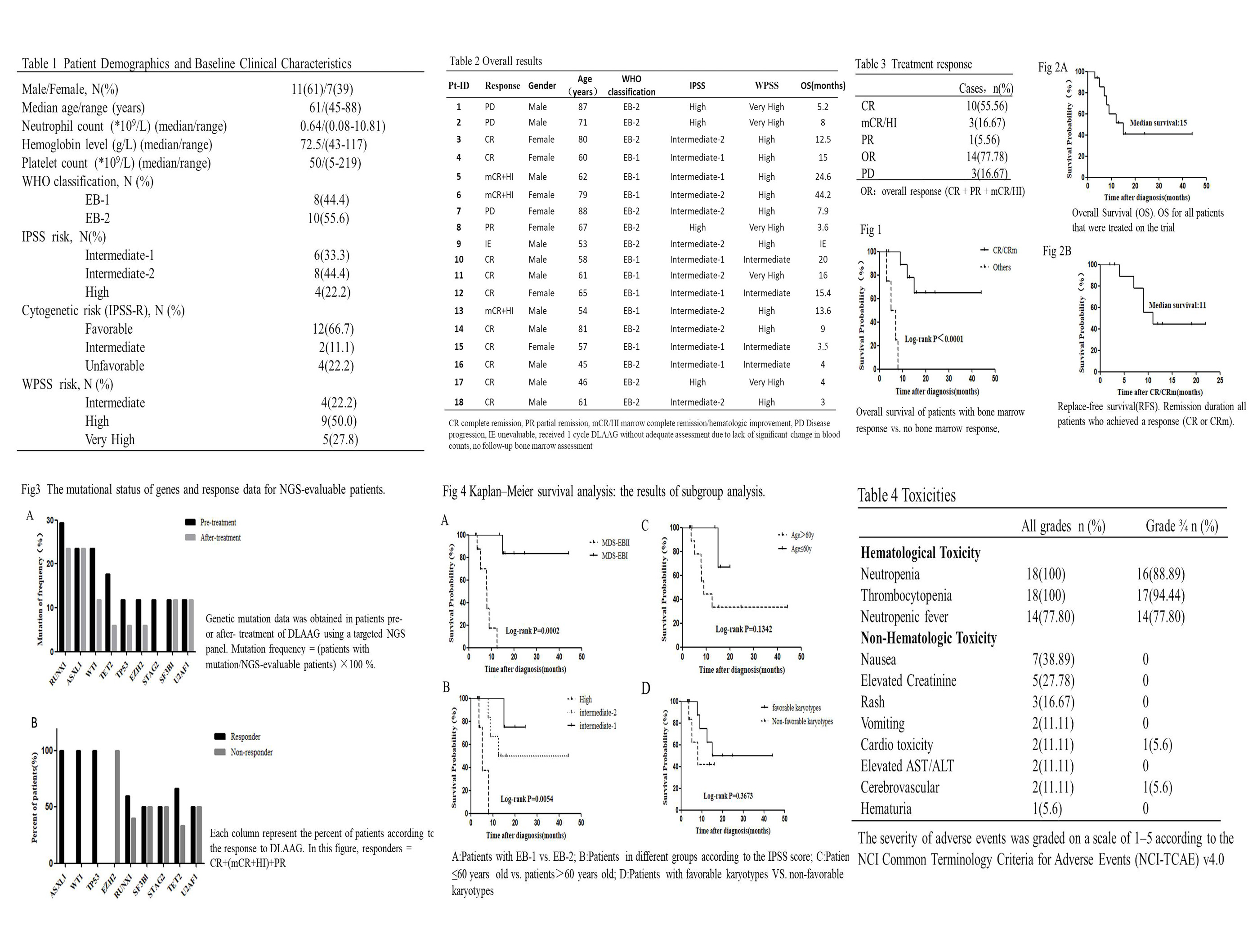