Approximately 50% of patients (pts) who receive initial cGVHD therapy are steroid refractory or dependent (SR/D); standard second-line therapy has yet to be established. Quality of life (QOL) in these pts is poor and worsens with disease severity.

In the phase 3 REACH3 study in SR/D cGVHD (NCT03112603), RUX demonstrated superior efficacy compared with BAT, with a higher overall response rate at wk 24 (primary endpoint), longer failure-free survival, and a higher proportion of pts with a significant improvement in symptoms on the cGVHD-specific modified Lee Symptom Scale (mLSS; 24.2% vs 11.0% at wk 24; P=0.001) (Zeiser NEJM 2021).

Given the significant impact of symptoms on QOL, the collection of PROs is recommended by NIH consensus criteria, and assessing QOL via PRO measures specifically designed to capture cGVHD symptoms (ie, the mLSS) is important in evaluating treatment. We present an analysis of PROs in REACH3 and compare mLSS subscale results with objective organ responses (data cutoff: May 8, 2020).

Pts ≥12 years old with moderate or severe SR/D cGVHD were randomized (1:1) to RUX 10 mg twice daily or investigator-selected BAT (prespecified from 10 options). Randomized treatment was administered for ≥6 cycles (28 d/cycle) along with corticosteroids ± a calcineurin inhibitor. Addition or initiation of a new systemic agent for cGVHD was considered treatment failure.

PROs were collected at baseline and at 4-wk intervals through wk 24 or until treatment failure or discontinuation from the main study period. The rate of responders per improvement of ≥7 points from baseline in mLSS summary score (0 [no symptoms] to 100 [worst symptoms]) at wk 24 was a key secondary endpoint (alpha controlled). Additional endpoints were individual organ response and changes in other PROs (Functional Assessment of Cancer Therapy-Bone Marrow Transplantation [FACT-BMT], EQ-5D-5L, Patient Global Impression of Severity [PGIS], Patient Global Impression of Change [PGIC]). mLSS data at wk 24 were available for 55.8% of RUX pts (92/165) and 53.0% of BAT pts (87/164) (see Table for pts evaluable for other PROs).

A total of 329 pts received RUX (n=165) or BAT (n=164). Baseline characteristics, including symptom burden, were balanced between arms; 48% and 52% of pts had moderate or severe cGVHD, respectively. The baseline median summary mLSS score was 18.7 (RUX) vs 18.5 (BAT), indicating a moderate symptom burden.

More pts receiving RUX had an mLSS response at wk 24, at any time up to wk 24, and for ≥2 consecutive visits than those receiving BAT (Table). RUX was associated with a rapid and continued reduction in mean summary mLSS symptom score, whereas only an initial reduction at wk 4 was seen with BAT (Figure 1). In subset analysis, mLSS response was similar in RUX pts with moderate and severe cGVHD. Among pts achieving a complete or partial cGVHD response, those treated with RUX were more likely to have an mLSS response (RUX, 40.2%; BAT, 28.6%).

Response rates in mLSS subscales were higher with RUX vs BAT (odds ratio, >1.7; P<0.05, except lung). Greater mean reductions were observed with RUX vs BAT at wk 24 across all 7 mLSS subscales; improvements in organ-specific subscales corresponded with higher objective responses in the respective organ at wk 24 in both arms (Figure 2). As demonstrated by reductions on the Psych and Energy subscales, overall symptom burden not directly tied to organ responses was also better with RUX than BAT.

Compared with BAT, RUX resulted in more substantial improvement in PROs, with rapid, continued symptom improvement and benefits across mLSS subscales, indicating that RUX is superior to BAT not only in physician-assessed responses but also in terms of treating patients’ cGVHD symptoms. EQ-5D-5L and FACT-BMT scores were numerically higher with RUX than BAT, but the smaller changes suggest that these measures are too generic to fully capture the impact of cGVHD on QOL while confirming that multidimensional QOL was not reduced with RUX or BAT. Importantly, the pt experience of organ-specific symptom improvements was consistent with physician-assessed objective organ responses and both were greater with RUX. 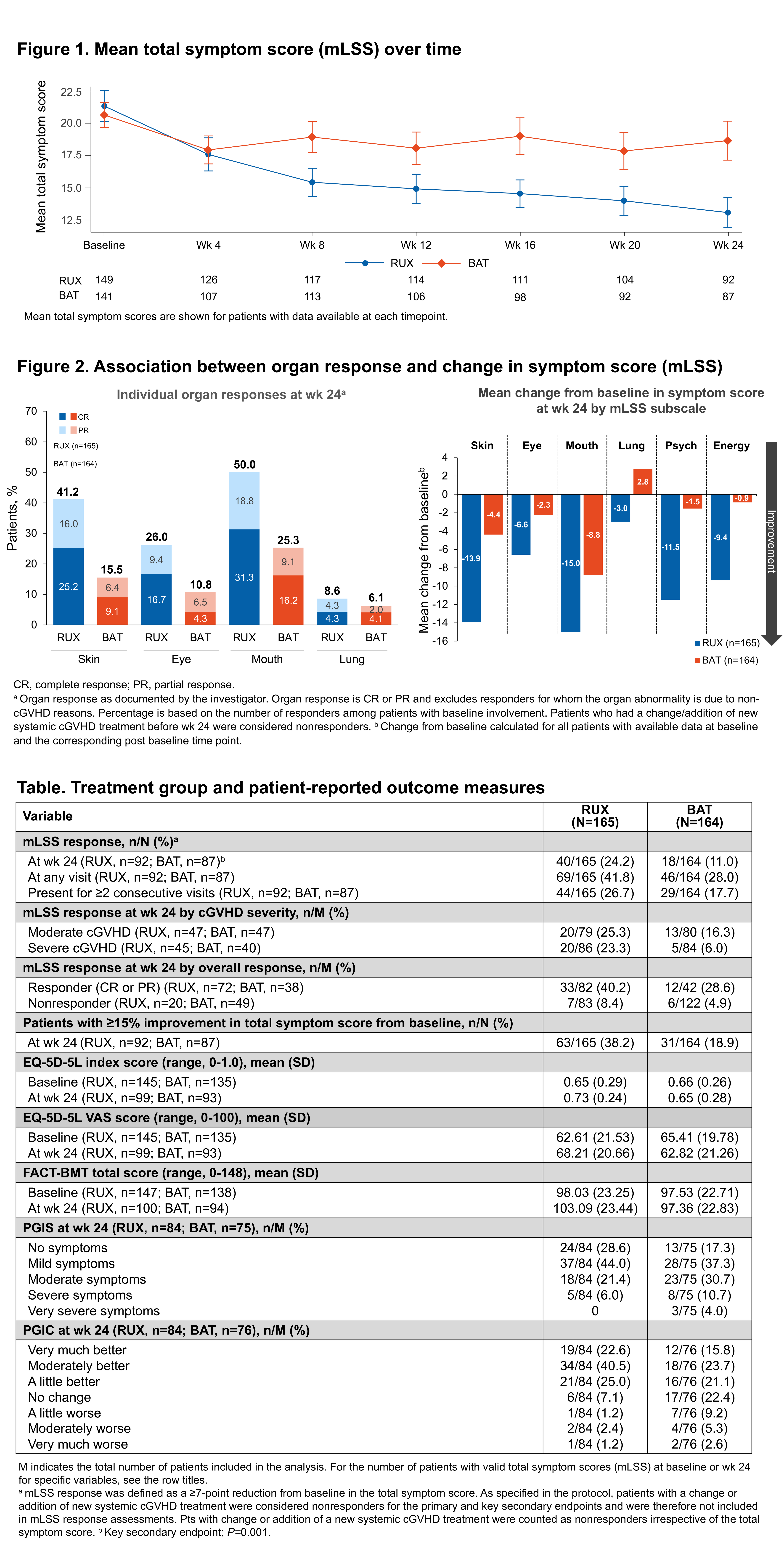