Immune thrombocytopenia (ITP) is a rare autoimmune condition associated with bleeding risk and fatigue. Current first line ITP treatment is with high dose corticosteroids but frequent side effects, heterogeneous responses and high relapse rates are significant problems, with only 20% remaining in sustained long-term remission. In the UK, mycophenolate (MMF) is frequently used as second line treatment, with retrospective data in ITP suggesting efficacy in 50-80% of patients with good tolerability, although responses are often delayed. The FLIGHT trial aimed to test the hypothesis that MMF combined with corticosteroid is a more effective first line ITP treatment than current standard of care, corticosteroid alone.

Of the 120 ITP patients consented, recruited and randomised (52.4% male, mean age 54 years, range 17-87), mean baseline platelet count was 7 x109/L and mean follow up was for 18 months (maximum follow up 24 months, minimum follow up of 12 months). Patient demographics and baseline values are shown in table 1. Significantly fewer treatment failures occurred in patients randomised to MMF as shown in figure 1 (22% [n=13 of 59] vs 44% [n=27 of 61], aHR=0.41 [0.21, 0.80], p=0.0064, and when secondary ITP patients were excluded, aHR 0.37 [0.19, 0.71] p=0.0029). There were similar rates between the groups of significant adverse events, bleeding events, rescue treatments, hospital admissions and treatment side effects including infection (n=14 in each group), neutropenia (4 patients in corticosteroid group), and gastrointestinal side effects (table 2). However, some aspects of quality of life (QoL) were worse in those patients assigned to the MMF group including physical role, physical function and fatigue.

This is the first randomised trial using MMF to treat ITP, demonstrating good efficacy and tolerability, even with the inclusion of elderly patients (27.5% were >70 years, 15.8% >75 years). Therefore, MMF may be considered an effective, well tolerated first line treatment option, alongside a short course of steroids, for some patients with ITP, approximately halving the risk of refractory or relapsed ITP. At final follow up, 56% of patients treated with corticosteroid alone had not required 2nd line treatment, which is higher than previous reports. It is unclear why some aspects of QoL were worse in the MMF group. This is an important reminder that disease response and patient experience may not correlate and emphasises the importance of including PROM outcomes within trials. For ITP, to date, PROMs have only been systematically evaluated in the TPO-RA randomised controlled trials.

The FLIGHT trial received ethical approval from NRES Committee South West and is registered, (EudraCT Number: 2017-001171-23. ClinicalTrials.gov number: NCT03156452). This abstract presents independent research funded by the National Institute for Health Research (NIHR) under its Research for Patient Benefit (RfPB) Programme (Grant Reference Number PB-PG-0815-20016). The views expressed are those of the author(s) and not necessarily those of the NIHR or the Department of Health and Social Care. 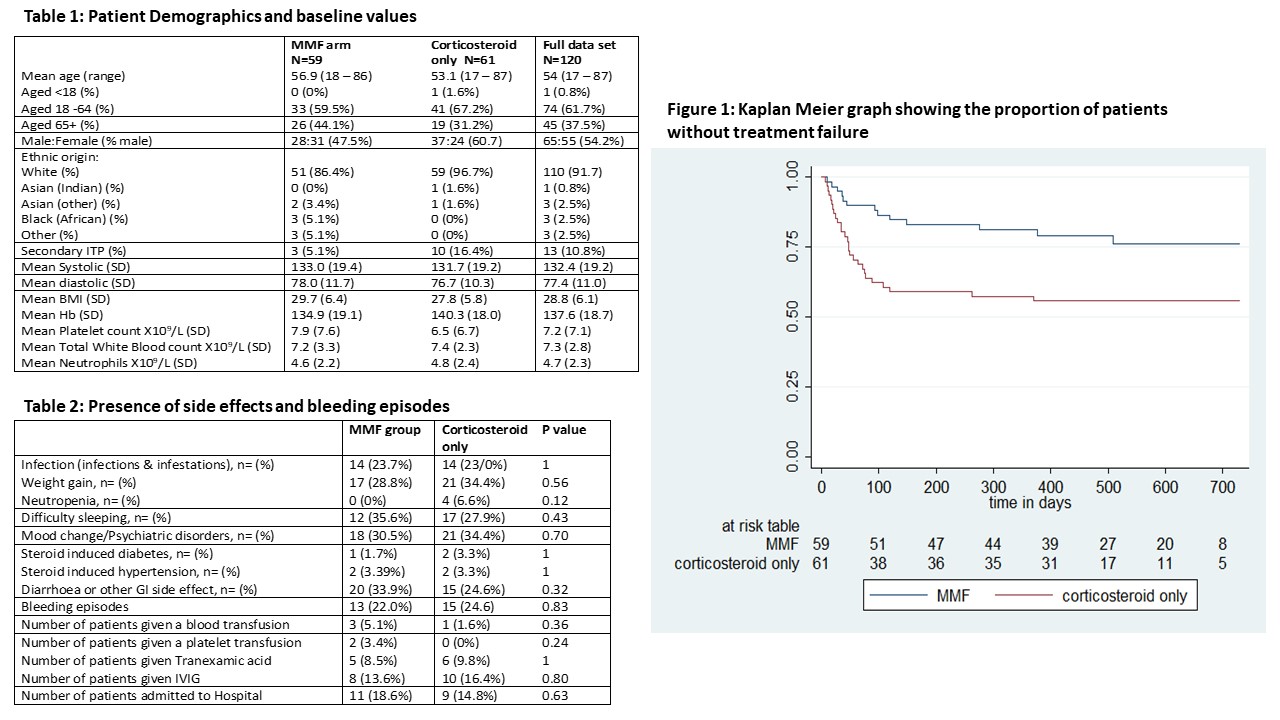