Patients with sickle cell disease (SCD) commonly experience negative attitudes from health care providers, leading to significant barriers to care and management of pain (Haywood 2009). Incidence of SCD is high on the South Side of Chicago and the University of Chicago Medical Center (UCMC) is among the primary systems in the area caring for these patients. Based on the results of a small pilot study conducted at UCMC in 2019, providers can hold biased beliefs that lead to inadequate delivery of analgesia (Nelson 2019). Because internal medicine (IM) and emergency medicine (EM) residents are often at the frontline of caring for patients with SCD, we sought to explore attitudes and beliefs amongst IM and EM residents at our institution in order to address biases with future interventions.

We conducted anonymous surveys using validated questions (Haywood 2011) for UCMC IM and EM residents. The surveys were administered in paper form during conferences in July 2019 to IM and EM residents and January 2020 to IM residents. The surveys, which included questions that assess barriers to care of patients with SCD and attitudes amongst providers, utilize the 4-point Likert scale in which higher scores correspond to stronger agreement with the statement. Participants were asked to provide non-identifiable demographic information including sex, ethnicity, age range, training year (PGY-1- PGY-3), and residency program. Responses were pooled and analyzed to assess for differences in attitudes by residency program (EM vs. IM), sex, age, year of training, and ethnicity. Statistical analysis was performed using the student’s t-tests to identify differences in average responses and ANOVA to examine for confounding variables.

When comparing these responses by year of training, attitudes generally became more negative with increased training, with advanced residents more likely to believe that SCD patients over-report pain (p=0.011), feel more frustrated caring for patients (p<0.001), consider themselves less likely to be friends with the patients (p=0.004), and feel less satisfied about going into medicine in general (p=0.012). No significant differences were observed when comparing resident ethnicity or age group.

This study highlights gaps in resident understanding of SCD and reveals biases held amongst IM and EM residents. Biases are augmented amongst IM residents and tend to become more exaggerated with increased level of training. The latter result may be confounded by burnout, which was not directly assessed in this study. The differences observed between IM and EM residents may be due to variation in education, workflow, or program diversity (although effect of ethnicity was not statistically significant). Resident-perceived barriers also seem to be focused on negative patient-centered factors (dependence, addiction, tolerance) rather than systemic limitations (availability, training, efficacy), likely reflecting negative resident attitudes as seen in previous studies (Haywood 2009). These data demonstrate an unmet need, underlining the importance of developing education, training, and potentially wellness programs to confront biases, build positive attitudes toward patients with SCD and ultimately remove barriers to care of patients with SCD. 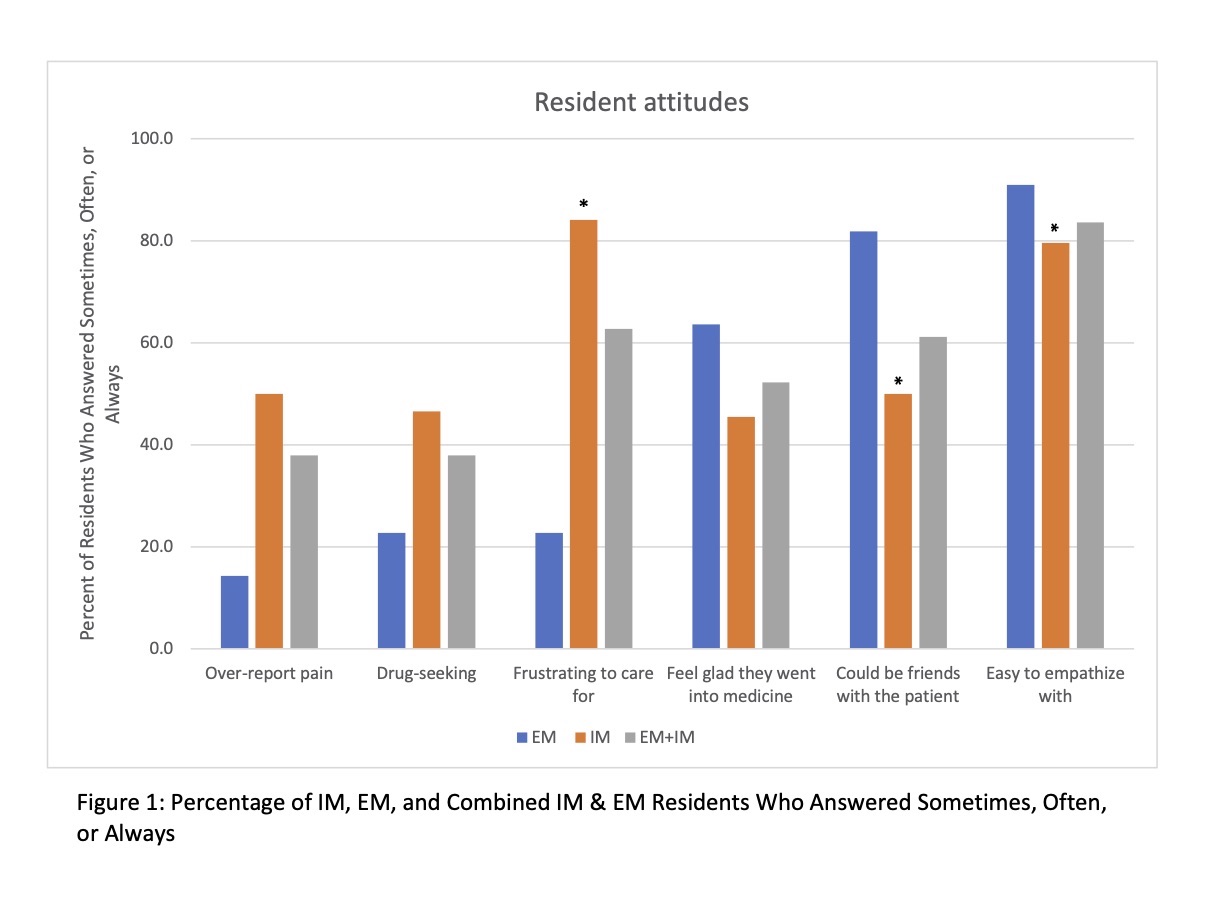