Background: Clonal hematopoiesis (CH) is an age-related condition in which somatic mutations can be detected in the blood of healthy individuals. In the non-transplant setting, CH is associated with an elevated risk of developing hematologic malignancy and an increased risk of non-hematologic outcomes due to altered inflammatory signaling. During hematopoietic cell transplantation (HCT), CH in older donors can engraft in recipients and could therefore influence outcomes through effects on graft immunologic function or by causing donor cell leukemia. A definitive link between donor CH and recipient outcomes has not been established. We therefore evaluated the impact of CH in donors aged 40 years or older on recipient clinical outcomes in 1727 donor-recipient pairs.

The presence of donor CH at VAF 0.01 or greater was associated with improved progression-free survival (PFS) in a multivariable model that included donor and recipient age, HCT-CI, disease category, Disease Risk Index score, conditioning intensity, and donor type (HR for death or relapse 0.81, 95% CI 0.68-0.97, P=0.019). This effect was driven by DNMT3A mutations, which were independently associated with improved overall survival (HR for death 0.75; 0.59-0.95, P=0.016) and reduced risk of relapse (sHR 0.76; 0.59-0.97, P=0.029) in the same model. CH involving other gene mutations, including TET2 and genes other than DNMT3A/TET2, was not significantly associated with any recipient outcome. Smaller clones (VAF 0.005-0.01) had no effect on any outcome.

Eight recipients developed donor cell leukemia (DCL), for a cumulative incidence of 0.7% at 10 years. In seven of these cases, we identified gene mutations in the corresponding donor products that matched the mutations found in the subsequent DCL, including 2 with TP53 mutations, 3 with splicing factor mutations, and 2 with germline DDX41 mutations that were present in both donor and recipient. No recipients who received products with sole DNMT3A-CH developed DCL.

Conclusions: In HCT donors age 40 or older, the presence of DNMT3A clonal hematopoiesis at VAF >/= 0.01 is independently associated with prolonged overall and progression-free survival in transplant recipients. This effect is driven by reduced risk of disease relapse and confined to recipients who do not receive PTCy, suggesting that it is mediated at least in part by effects on donor T cells. The risk of direct evolution of DNMT3A-CH to donor cell leukemia is low, and most DCLs were traced to atypical donor CH involving MDS-associated genes or germline risk alleles. 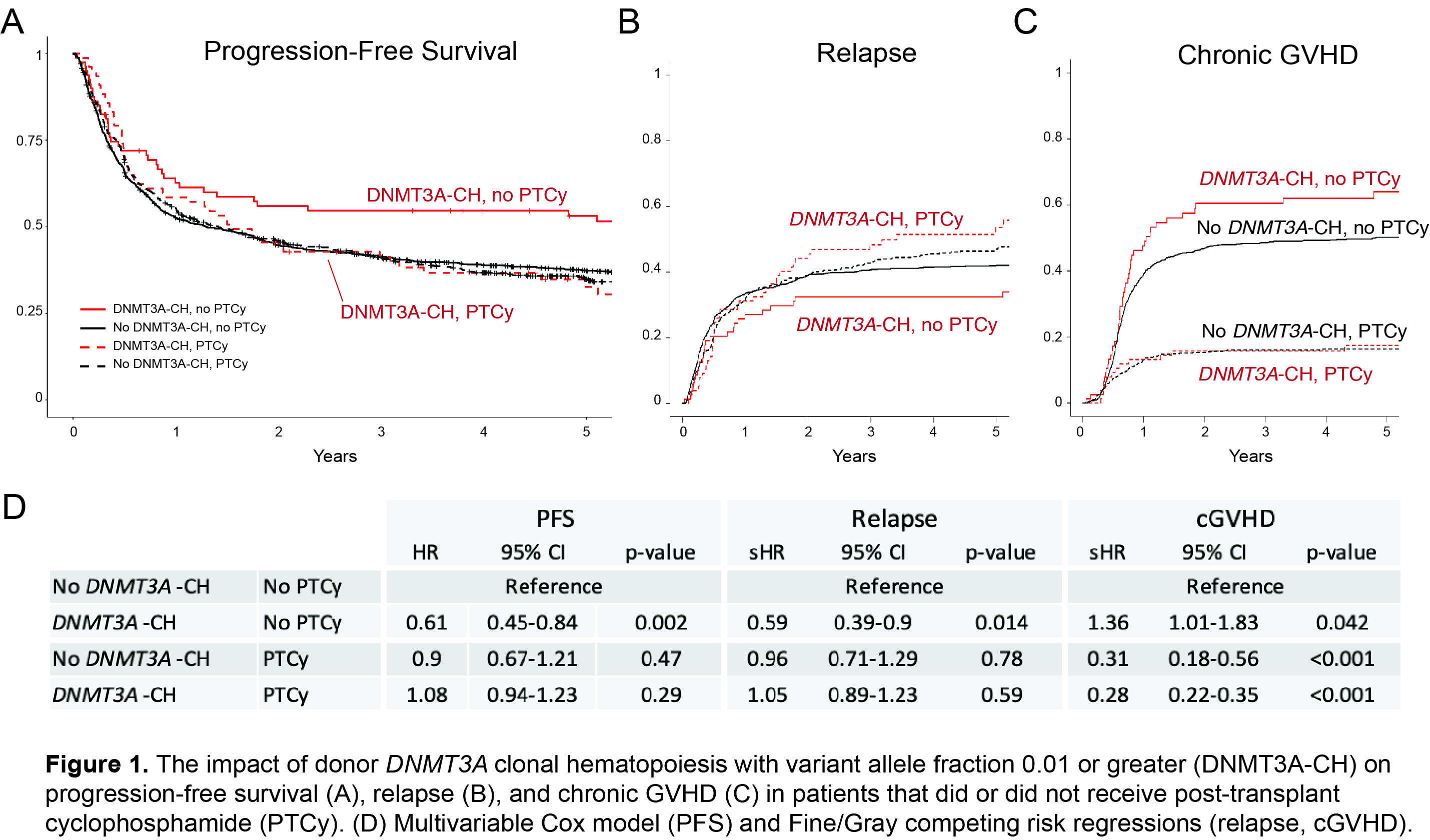