2845 Treatment with CPX-351 Induces Deep Responses and TP53 Mutation Clearance in Patients with t-AML and AML MRC, Including Younger Patients and Those with Pre-Existing MPNs: A Real-World Experience

Patients with secondary acute myeloid leukemia (sAML) have poor outcomes compared to those with de novo AML. In 2017, liposomal daunorubicin and cytarabine (CPX-351) was FDA approved for the treatment of adults with newly diagnosed AML with myelodysplasia-related change (AML-MRC) or therapy-related AML (t-AML). In its landmark trial, CPX-351 has displayed significant improvement in overall survival (OS) compared to conventional 7+3 in patients 60-75 years of age with sAML. Gaps remain in the literature regarding the clinical use of CPX-351 in context of the FDA approved label. Here we evaluate real-world outcomes with disease response and molecular monitoring in patients treated with CPX-351.

Adults who received CPX-351 between September 2017 and December 2019 were identified. The primary endpoint was overall response rate (ORR), defined by complete remission (CR) and CR with incomplete hematologic recovery (CRi) according to the Revised IWG criteria. Additional outcomes of interest included molecular minimal residual disease (MRD) status post induction as measured by next-generation sequencing (NGS), ORR in patients with baseline TP53, and progression-free survival (PFS) in patients with CR/CRi, with and without MRD after induction. Mutations associated with clonal hematopoiesis (TET2, ASXL1, DNMT3A) were excluded from analysis of molecular MRD.

Most patients were hospitalized until hematologic recovery. However, 5 patients received induction in the outpatient setting, and an additional 6 patients were discharged early before hematologic recovery. Among the patients who were discharged early or underwent outpatient induction, 81.8% (9/11) were admitted for a complication. There were no deaths associated with outpatient induction. Overall, 46 patients (85.2%) experienced febrile neutropenia and 17 patients (31.5%) had bacteremia. Thirty-day and 60-day mortality were 9.3% and 14.8%, respectively.

Median OS was 10.4 mos. Median OS was similar for patients older or younger than 60 years (p=0.76). For patients achieving a CR/CRi, median OS had not been reached at the time of analysis but was significantly improved compared to those with refractory disease (6.1 mos, p=0.0007). Median OS or PFS did not differ significantly (p=0.68) based on MRD negativity (Figure 1).

This analysis demonstrates comparable response rates to the landmark trial (54% in our analysis vs. 47.7%). Outpatient induction and/or early discharge was safe and feasible in appropriately selected patients. While this analysis is limited by the small sample size, CPX-351 appeared effective in populations that were not included in the published randomized studies, such as patients below the age of 60 years old and those with antecedent MPN. Remission rates and MRD clearance was high among TP53 mutants. A considerable number of patients who achieved a remission remained MRD positive by NGS, but this did not impact PFS. Future studies should evaluate the impact of molecular MRD and allele frequency to further guide treatment. 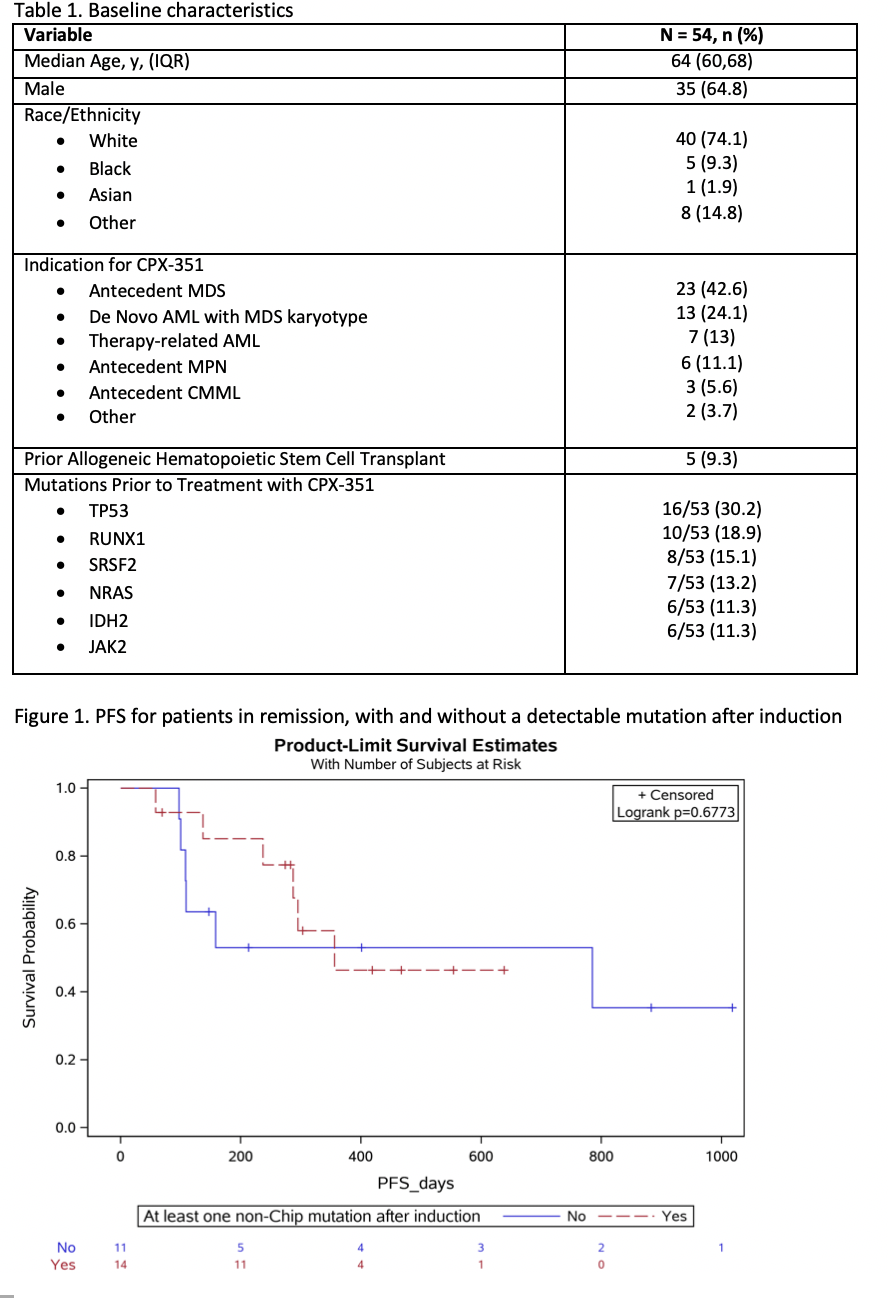