Background: Management of ITP following failure of 1st line therapy, such as corticosteroids or intravenous immunoglobulin, continues to evolve. The use of thrombopoietin receptor agonists (TPO-RAs) as a subsequent therapeutic approach has become more common, which is supported by the recent American Society of Hematology guidelines (Neunert 2019). The oral TPO-RA eltrombopag (ELT) has an established efficacy profile but also carries an FDA boxed safety warning for hepatotoxicity, necessitating hepatic function monitoring. Additionally, ELT acts as a chelating agent, thus requiring administration two hours prior to, or four hours after meals containing polyvalent cations such as calcium or magnesium, in order to mitigate clinically relevant effects on the pharmacokinetic profile.

Avatrombopag (AVA) is an oral TPO-RA approved for patients (Pts) with ITP that has not been shown to induce hepatoxicity in clinical studies and carries no requirement for monitoring of liver function. AVA does not chelate polyvalent cations and therefore is administered with food and without restrictions regarding meal composition.

Aims: To evaluate the efficacy profile of AVA across its clinical development program, comprised of four Phase 2 and 3 studies, and including previously unreported results of study 305, a head to head comparison trial of AVA and ELT that was discontinued early due to enrollment challenges.

Methods: Two Phase 2 studies were conducted evaluating AVA in ITP. Study CL-003 was a 28-day fixed dose ranging evaluation with a placebo (PBO) control, and study CL-004 was a 6-month continuation of study CL-003 allowing for dose titration of AVA in all participants. Two Phase 3 trials evaluating AVA were also conducted in ITP Pts, including study 302 a 6-month placebo-controlled study, and study 305, a randomized 6-month,non-inferiority trial with ELT seeking to enroll 286 Pts, that was stopped early due to enrollment challenges (23 enrolled) based on required endoscopy and commercial availability of ELT. Various efficacy analyses from these studies were performed in order to understand the consistency of AVA response across different patient populations in reference to PBO and ELT.

Results: 128 Pts treated with AVA, 22 with placebo, and 11 with ELT were evaluated in the different studies. 99.2% of Pts were treated with AVA for at least 7 days and 63.3% continued treatment for at least 180 days with an average duration of exposure of 206.4 days for AVA vs 73.5 for ELT and 54.9 with placebo. For study 305 specifically, 12 AVA and 11 ELT Pts were enrolled with mean duration of drug exposure in the core study of 15.6 (median 13.1) and 10.5 weeks (median 6.9) respectively, and the enrolled populations were similar in regard to baseline characteristics (age, sex, ethnicity, baseline PC, splenectomy status or use of concomitant ITP medications).

Conclusions: The accumulated efficacy data in the AVA development program demonstrates a consistent effect across different studies conducted in a variety of countries. Though difficult to draw clear conclusions due to the limited study population, head to head data comparing AVA and ELT provide an opportunity for individual interpretation. 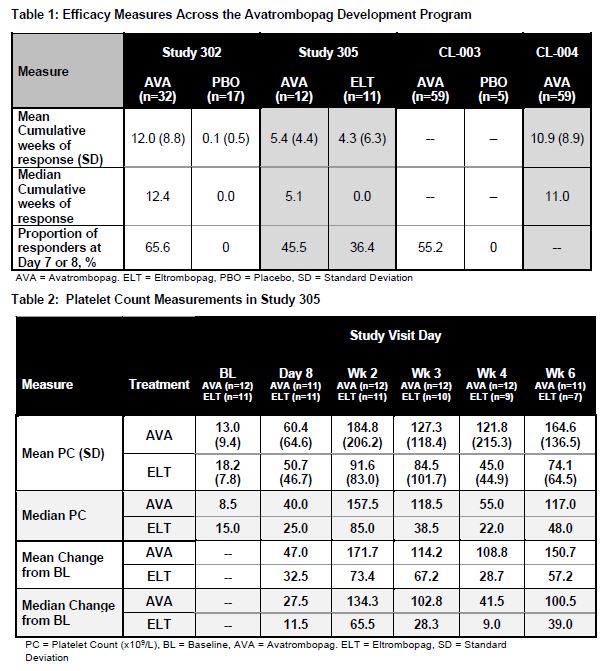