Introduction: Lenalidomide and dexamethasone (Rd) is an effective, but rather toxic rescue treatment in relapsed/refractory AL amyloidosis (RRAL). The increase of NT-proBNP that frequently occurs under LDex hampers the assessment of cardiac disease, while renal toxicity can result in end stage renal failure. We report 260 patients with RRAL treated with Rd with a long median follow-up (4.7 years) and an evaluation of cytogenetic abnormalities by fluorescence in situ hybridization (iFISH) in 193 cases.

Methods: Data were collected from the prospectively maintained database of the Heidelberg Amyloidosis Center. With the exception of iFISH data, variables were all collected at the last evaluation before starting Rd. Patients received lenalidomide (days 1-21) and dexamethasone (days 1, 8, 15 and 22) in a 28-days cycle. Lenalidomide dose was adjusted according to clinical status and renal function (median starting dose 15 mg; range: 5-25 mg). Patients received thrombosis prophylaxis with acetylsalicylic acid (100 mg/day) or heparin. Hematologic response was assessed by intent to treat at 3 months after treatment initiation as per validated criteria (Palladini, et al. JCO 2012). In cases with a baseline difference between involved/uninvolved light chains (dFLC) <50 mg/L, response was defined according to low-dFLC response criteria (Dittrich, et al. Blood 2017). A very good hematologic response (VGHR) was defined as the achievement of very good partial response or better, including low dFLC-response. Cardiac progression was defined as per current criteria (Palladini, et al. JCO 2012). Overall survival (OS) and hematologic event free survival (hemEFS) were evaluated from Rd initiation. Multivariate Cox regression analysis was used for identification of prognostic factors.

Conclusion: Achieving a VGHR with LDex is not frequent at 3 months but results in long OS (median >5 years). Patients with clonal plasma cells harbouring gain 1q21, higher dFLC or NT-proBNP have a worse survival. AEs were frequent (50% of patients), resulting in treatment discontinuation in 1/5 of cases. Almost 1/3 of patients had a worsening of renal function, resulting in progression to dialysis in 15% of cases at 24 months. Cardiac progression defined by NT-proBNP results in significantly shorter OS. Therefore, it should be assessed carefully and be considered for treatment change along with no hematologic response. This information should be kept in mind, since novel and promising results are coming from the association with Rd with ixazomib or daratumumab. This could result in a novel and wider role of lenalidomide in treatment of AL amyloidosis. 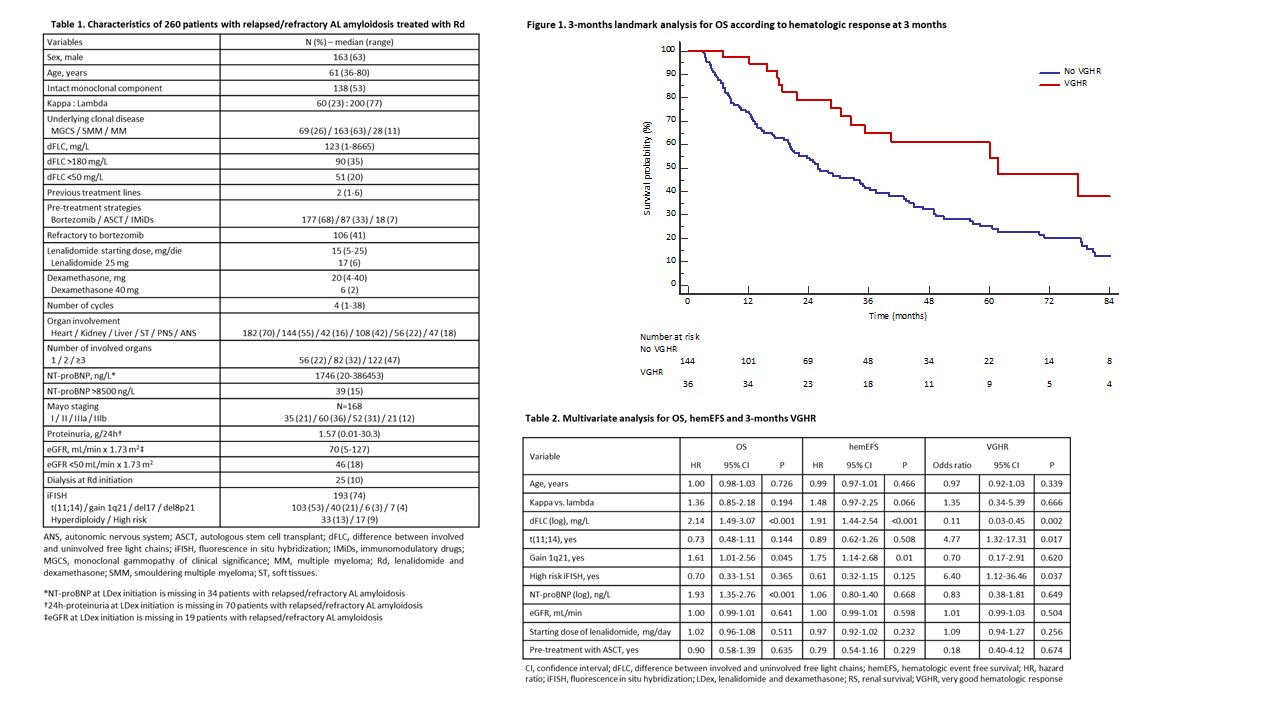