Background: Angiomotin (AMOT) was initially identified as a medium that binding to angiostatin and regulating angiogenesis or endothelial cell migration. Accumulating evidences support that AMOT is associated with tumor proliferation, apoptosis and invasion. However, the potential role and functional mechanism of AMOT in diffuse large B-cell lymphoma (DLBCL) have not been well-characterized. We hypothesized that AMOT could inhibit tumorigenesis and enhance chemosensitivity by regulating DNA damage response (DDR). In the current study, we evaluated the expression and function of AMOT in DLBCL tissues and cell lines. We also assessed the proliferation, cell cycle and apoptosis of DLBCL cells when treated with doxorubicin. The aim of this study is to investigate the functional significance of AMOT and its therapeutic potential in DLBCL.

Results: The percentage of AMOT-positive cells in DLBCL samples was statistically less than in reactive hyperplasia of lymph nodes tissues (Fig. 1A). The expression of AMOT was negatively associated with serum lactate dehydrogenase (LDH, P=0.023) and international prognostic index (IPI) score (P=0.017). Furthermore, Kaplan-Meier analysis indicated that the median survival of patients was significantly longer in AMOT-positive group than AMOT-negative group (Fig. 1B). DLBCL cells (LY1, LY8 and Val) exhibited remarkably lower mRNA as well as protein levels of AMOT compared to the control groups (Fig. 1C and D). AMOT-overexpression caused substantial growth suppression (Fig.1E) and increased proportion of cells in the G1 phase, with a concomitant decrease in the S phase of DLBCL cells (Fig. 1F). However, no significant change in the apoptosis rate after AMOT upregulation was observed.

To investigate the effect of AMOT on the chemosensitivity of DLBCL cells, we incubated the DLBCL cells with doxorubicin for different concentrations or different time. The LV-AMOT group showed increased sensitivity to doxorubicin compared to the LV-Con group (Fig. 1H). Compared with the control, the LV-AMOT group showed an increased accumulation of cells in the G1 phase (Fig. 1I) and improved apoptosis rate (Fig. 1J). Western blotting showed that AMOT upregulation attenuated the activating phosphorylation of ATM (Ser1981)、ATR (Ser428)、Chk1 (Ser345)、Chk2 (Thr68) and H2AX (Ser139) after doxorubicin (160nM) treatment for 24 hours(Fig. 1K).

Conclusion: AMOT acts as a tumor suppressor via inhibition of the DDR, thus reducing the viability while increasing chemosensitivity in DLBCL. AMOT may be a potential target for DLBCL patients with doxorubicin resistance. 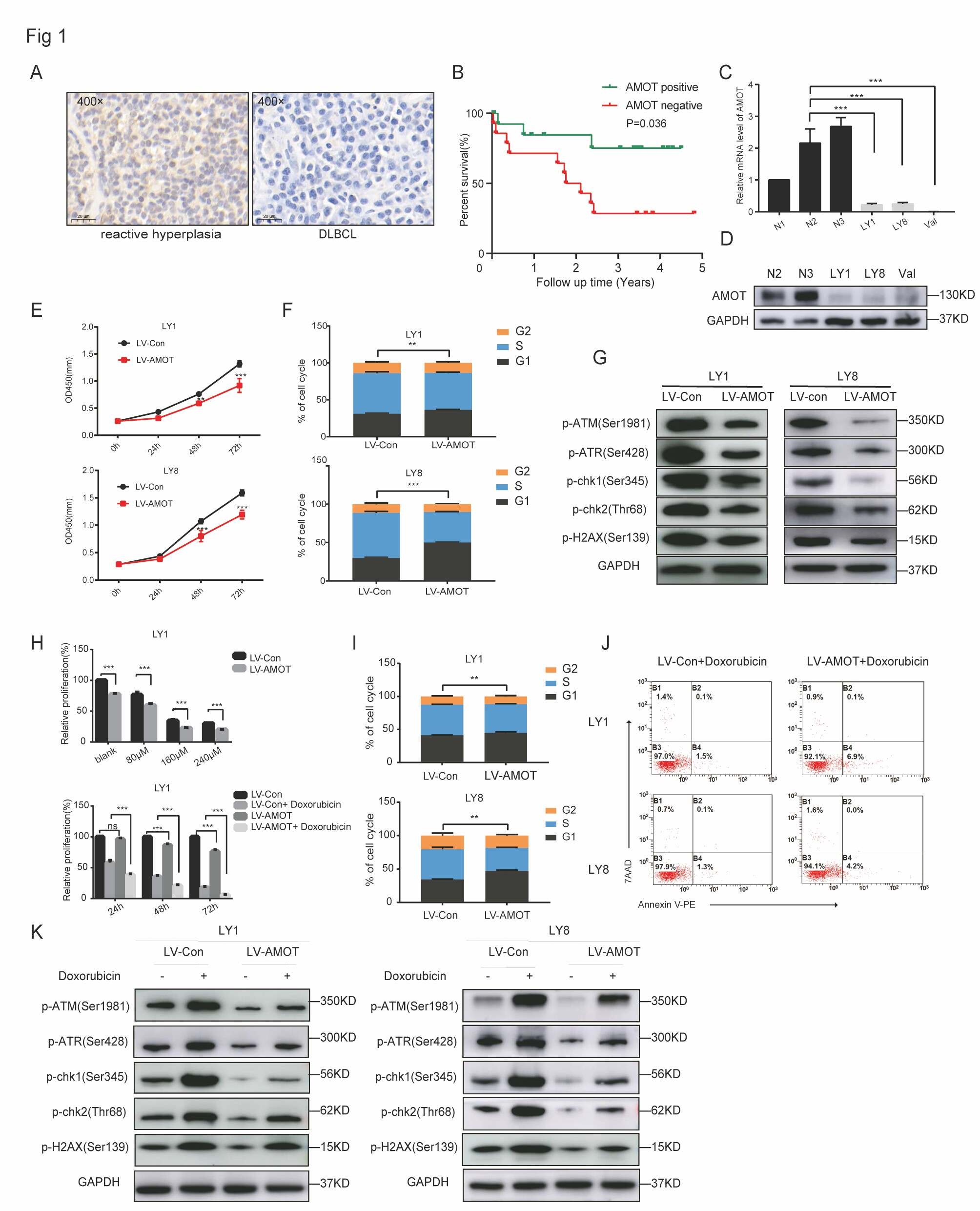