In an ongoing prospective, longitudinal study, we report on 11 patients with relapsed ALL (ages 6-19 years, 7 males) who received CD19 CAR T cell therapy and underwent serial comprehensive assessments including multimodal magnetic resonance imaging (MRI) of the brain (anatomical, perfusion, diffusion tensor imaging and MR spectroscopy) and neuropsychological testing. Extensive neuropsychological testing of a wide range of cognitive functions was performed. Time points for data collection included: 1) at baseline, prior to lymphodepleting (LD) chemotherapy, consisting of fludarabine and cyclophosphamide, and post-CD19 CAR T cell infusion, 2) on day 10, at peak ICANS (if applicable), and 3) at day 28, upon resolution of cytokine release syndrome (CRS) and ICANS. In addition, multimodal MRI and neuropsychological tests were acquired in 14 healthy controls (ages 5-20 years, 5 males), at one time point as baseline. The MRI data were acquired on a 3T Philips MR scanner using a 32 channel head coil without the use of sedatives or contrast agents. All MRI data were processed blinded to the participant diagnosis and the order of data acquisition.

In our cohort of 11 patients, 7 developed cytokine release syndrome and 4 developed ICANS (Table 1). At baseline, patients relative to controls had thinner cortices across the entire brain (Fig.1A). Patients who developed ICANS, compared to those who did not, had additional cortical thinning in the frontal, anterior cingulate, anterior temporal, dorsal parietal, and posterior cingulate cortices (Fig.1B), which together constitute the dorsal attentional network. Consistent with the thinning of attentional cortices, baseline neuropsychological assessments of patients who developed ICANS relative to those who did not revealed worse scores in the measures of inattention (p=0.025), ADHD (p=0.038), and panic disorder (p=0.016), as well as impaired working memory represented by poorer performance on the backward digit span (p=0.038) and digit total (p=0.01) tasks. Regions in the dorsal attentional network demonstrated further cortical thinning on day 10 post-infusion and rebounded to baseline values by day 28 post-infusion in most, but not all patients (Fig.1B).

MRI findings revealed that all patients demonstrated global thinning of the cortex at baseline, likely secondary to prior chemotherapy and/or radiation therapy for ALL. These findings were more pronounced in patients who later developed ICANS and were concentrated in the area of the dorsal attentional network of the brain. This was recapitulated in baseline neuropsychological assessments which revealed deficits in attention and working memory in patients who later developed ICANS. In addition, patients with ICANS had additional cortical thinning by day 10 post-CAR T cell infusion, yet had the least cortical reserve to withstand such changes. Although most patients returned to baseline cortical thickness by day 28, which was coincident with ICANS resolution, a subset of patients failed to return to baseline cortical thickness, and we predict that these may be the patients at highest risk for long term brain changes and associated cognitive disturbances. We anticipate that the combination of MRI changes in cortical thickness, especially in the dorsal attentional network, and neuropsychologic impairments at baseline could serve as predictive biomarkers for patients who develop ICANS which in turn could allow for future interventional trials designed to mitigate or prevent ICANS in at-risk individuals. 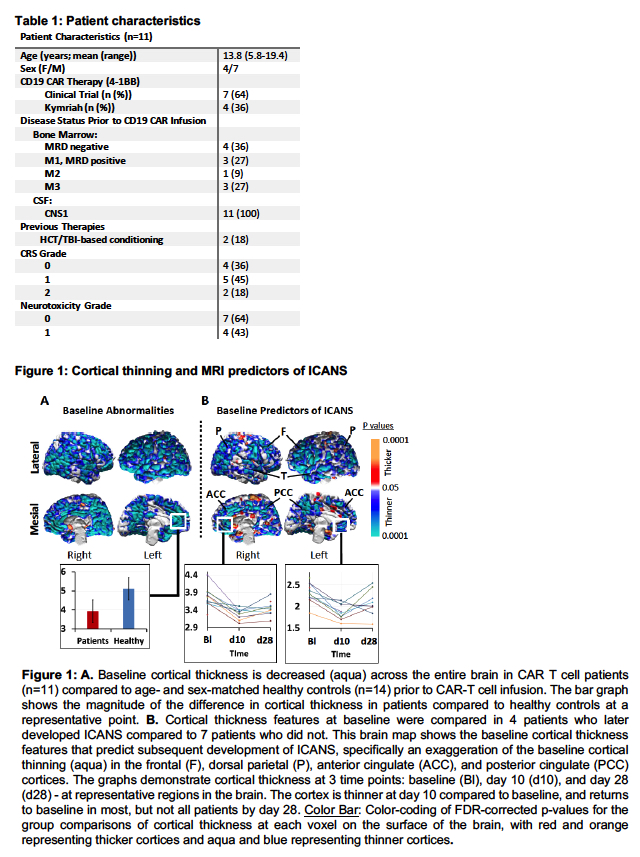