858 Study of the Effect of Fibrinogen, Factor XIII and Recombinant Activated Factor VII in a Model of Trauma-Induced Coagulopathy

Introduction: Trauma-induced coagulopathy (TIC) is a multifactorial condition secondary to severe trauma. In TIC, early fibrinogen (FI) replacement and low dose of recombinant activated factor VII (rFVIIa) may positively impact outcome. Factor XIII (FXIII), on the other hand, may stimulate in vitro clot formation and clot stability. We hypothesized that combination of FI, rFVIIa and FXIII might normalize clot formation more effectively than the isolated use of each concentrate in a model of TIC.

Aim: Evaluation of the procoagulant effect of isolated or combined use of FI, rFVIIa and FXIII in a model of TIC.

Methods: TIC in vitro model was obtained by dilution of whole blood from seven healthy controls with isotonic saline (NaCl 0.9%) (2:3 whole blood:saline ratio). FI, rFVIIa and FXIII were spiked in combination or alone until obtaining final levels of 2 g/L, 1 μg/mL and 100 IU/dL respectively. Procoagulant effects of the different concentrates or their mixtures were evaluated by Rotational Thromboelastometry (ROTEM®, Werfen) triggered using starTEM® (calcium chloride 0,2 M) and exTEM® reagent (source of tissue factor) diluted with saline up to 1:100.000 (final dilution) for a better evaluation of both the extrinsic and intrinsic pathways of coagulation. The values of clotting time (CT: time until 2 mm of amplitude, in seconds), amplitude (parameter proportional to the clot strength) at 5 minutes (A5, in mm) and clot formation time (CFT: time from CT to 20 mm of amplitude, in seconds) were evaluated. Statistical analysis of differences was performed by One-Way ANOVA test assuming no paring of data and using the Holm-Sidak’s correction for multiple comparisons with a family-wise significance and confidence level of 0.01. Statistical significance was set at p< 0.05.

Results/Discussion: Data are summarized in Table I and Figure 1. CT needed the combination of two of more concentrates to reach the normal range suggesting that the administration of FI alone in TIC may not be enough to restore the patients’ hemostatic potential. In regard to the clot strength evaluated by A5, the addition of FXIII or rFVIIa alone or in combination did not improve the value of A5 that was only normalized by the addition of FI. This effect of FI was increased in the presence of FXIII or rFVIIa which indicated that normal levels of FI might be required for rFVIIa or FXIII to be effective emphasising the possible benefit of the combinatory therapy. Like observed in A5, the velocity of clot formation evaluated by the CFT was normalised only by the addition of FI. However, the combination of FI plus FXIII + rFVIIa had a stronger effect on CFT compared with the combination of FI + FXIII or FI + rFVIIa, indicating that the improvement of thrombin generation due to rFVIIa plus an increment of fibrin formation and net stabilization through the contribution of higher levels of FI and FXIII respectively, might provide a beneficial synergistic procoagulant effect in TIC.

Conclusion: The use of FI in TIC may contribute to increase the patient's hemostatic potential but might not be enough. Combinatory therapies based on the administration of FI, rFVIIa and FXIII might be of better benefit in this setting. Ex-vivo studies using blood of patients with stablished TIC might bring new insights on the possible advantages of this combinatory therapy to design more effective protocols to treat this frequent and life-threatening acquired condition. 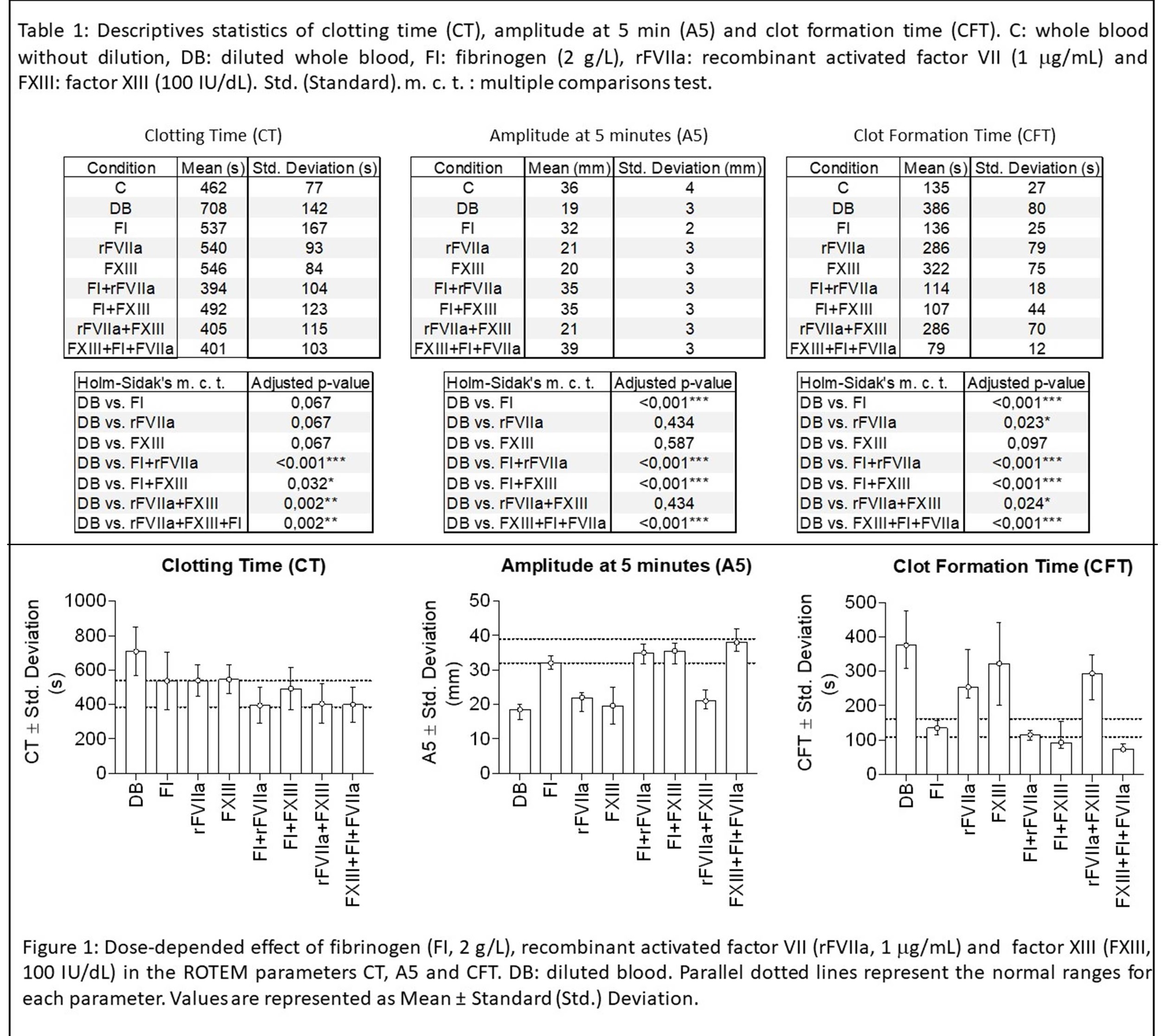