1207 Risk of Non-Hodgkin’s Lymphoma in HCV Patients in the United States between 2013 and 2020: A Population-Based Study

Hepatitis C virus (HCV) is a major healthcare problem affecting ~ 1% of the United States population. HCV virus is known to have lymphotropic properties and metanalyses of epidemiological studies reported an association between HCV and non-Hodgkin’s lymphoma (NHL) with a relative risk range (1.8 to 10.8). 1–4 Most studies included in these metanalyses were heterogenic with different control groups, and contained a relatively small number of patients that prevented the evaluation of racial differences or the association of HCV with distinct NHL subtypes. We conducted a population-based study to address these deficiencies and to explore if the prevalence of NHL has changed since older therapy of HCV based on interferon that shared both anti-viral and anti-lymphoma properties was replaced with the interferon-free direct-acting antivirals (DAA).

We reviewed data from a nationwide commercial database (Explorys, IBM) that aggregates records from 26 health-care-systems and includes 72 million patients. We identified adult patients aged ≥ 40 years with HCV between June 2013 and June 2020. The control population was HCV-negative matched for gender, race; Caucasian, and African-American, and two age groups; 40-64 years and ≥ 65 years. We excluded all patients who developed NHL before the study start date and patients with HIV. The association between NHL and HCV was evaluated using odds ratios (OR) with a 95% confidence interval. The differences were considered significant at a P value of less than 0.001.

Our study is the largest of population-based studies evaluating the risk of non-Hodgkin’s lymphoma in patients with HCV. The Risk of HCV-associated NHL was higher with an OR of 2.6 compared to older studies in the US published before DAA therapy was available reporting an OR close to 1.5.5,6 The observation of increased risk of chronic lymphocytic leukemia, follicular lymphoma, marginal zone lymphoma, lymphoplasmacytic lymphoma, and diffuse large B-cell lymphoma was comparable with the prior meta-analysis. 1–4 However, we found an increased risk in Burkitt’s lymphoma, non-Hodgkin’s T-cell lymphoma and primary cutaneous T-cell lymphoma. Possible pathophysiology of HCV-associated lymphomagenesis is shown in Figure 2.

Limitations of the databased based project include inaccuracies and miscoding. Given the nature of the data it was not possible to study differences between patients who received interferon-based therapy versus DAA.

In conclusion, despite recent advances in HCV treatment, the risk of NHL among HCV infected patients remains elevated and it was persistent in males and females. In contrast to non-HCV background population where Caucasians had a higher prevalence of NHL, there was no difference between Caucasians and African-Americans. An effort to early detect and treat HCV is needed along with establishing prospective studies to examine the impact of HCV therapy with DAA on NHL risk. 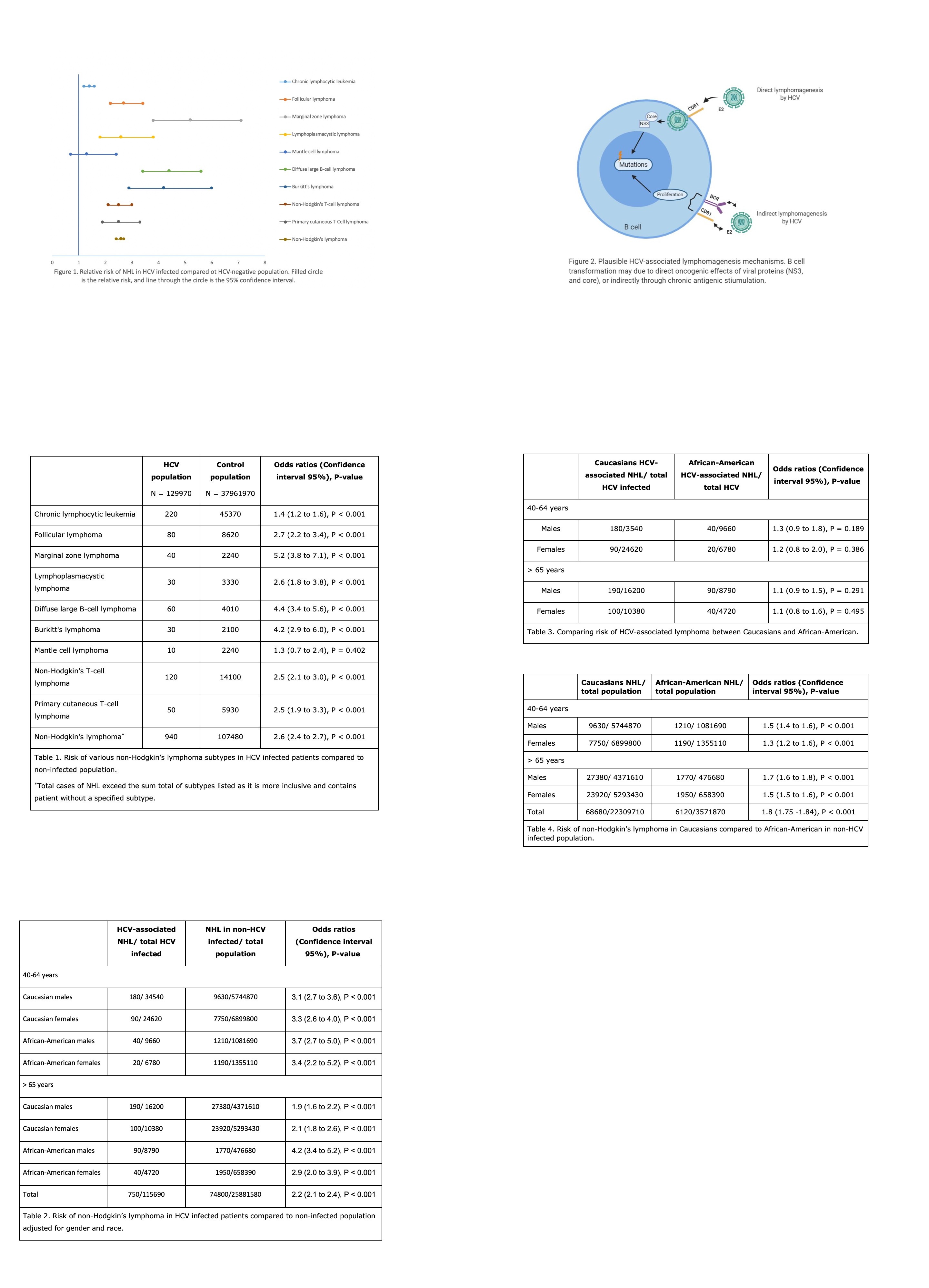