Plasmablastic lymphoma (PBL) is a rare entity of aggressive large B-cell lymphoma initially described in HIV positive (pos) patients (pts) but subsequently also in immunocompetent pts. Due to its rarity and aggressiveness, there is no standard of care therapy. The published literature suggests CHOP chemotherapy is suboptimal. The role of bortezomib (BTZ) and more intensive therapies including consolidative stem cell transplant (SCT) remain uncertain. We aim to review the clinical characteristics and outcomes of pts with PBL in a population-based cohort from BC, Canada.

10/15 HIV pos pts were not on highly active antiretroviral therapy (HAART) at diagnosis. All but one were started on HAART after diagnosis. 8/9 pts receiving CIS had a dose reduction at diagnosis. 31 pts (11 HIV pos, 12 HIV negative, 8 CIS) received curative intent chemotherapy: 29 CHOP, 2 CEOP, and 5 had BTZ added/in place of vincristine. 3 pts had a consolidative autologous SCT (autoSCT) upfront. 10 pts, median age 77 y (range 38-94 y), had palliative therapy (single agent chemotherapy or radiation) due to poor performance status and/or comorbidities. An additional pt achieved complete response after HAART, then relapsed 19 months (mos) later, treated with CHOP but had further relapse and died of disease.

Median follow-up of living pts was 19 mos (range, 4-170). For pts treated with curative intent (N=31), 13/31 pts (42%) remain alive and in remission. 4 were refractory to first line chemotherapy, of which 3 were HIV pos. Only 2 of the refractory pts were fit for salvage therapy but did not respond and died of disease. 9 pts relapsed at a median of 15 mos (range, 8-50) from diagnosis, including 2/3 pts who received upfront consolidative autoSCT. 6/9 relapsed pts received salvage chemotherapy, generally with GDP. 1 pt died from early treatment toxicity. The other 5 pts were considered for SCT but 2 were ineligible due to progressive disease or comorbidities. Overall, 3 pts underwent consolidative SCT at relapse but 2 pts relapsed again within 6 mos of autoSCT. An additional pt is undergoing allogeneic SCT for relapse, 43 mos post upfront autoSCT. There was no difference in relapse rate according to HIV status (44% HIV negative vs 40% HIV pos, P=.63), however pts receiving CIS appeared to have a lower relapse, although not statistically significant (33%, P=.25).

At last follow-up, 18 pts have died: 12 from PBL (4 refractory, 8 relapsed); 4 from treatment complications during/within 3 mos of therapy (infection 2, myocardial infarction 2); 1 had comorbidities and tolerated first line therapy poorly, therefore elected for medical assistance in dying; 1 died in remission of an unrelated cause.

This is one of the largest reviews of PBL pts reported. Our results confirm that PBL is a highly aggressive lymphoma with a low cure rate with current therapies and no difference in outcome according to immune status. We do not have adequate numbers to demonstrate additional benefit of BTZ or SCT. Nearly all pts who relapsed after upfront therapy died of disease. Further research is needed to understand the molecular mechanisms underlying the pathogenesis of PBL and to identify treatment strategies that will improve patient outcomes. 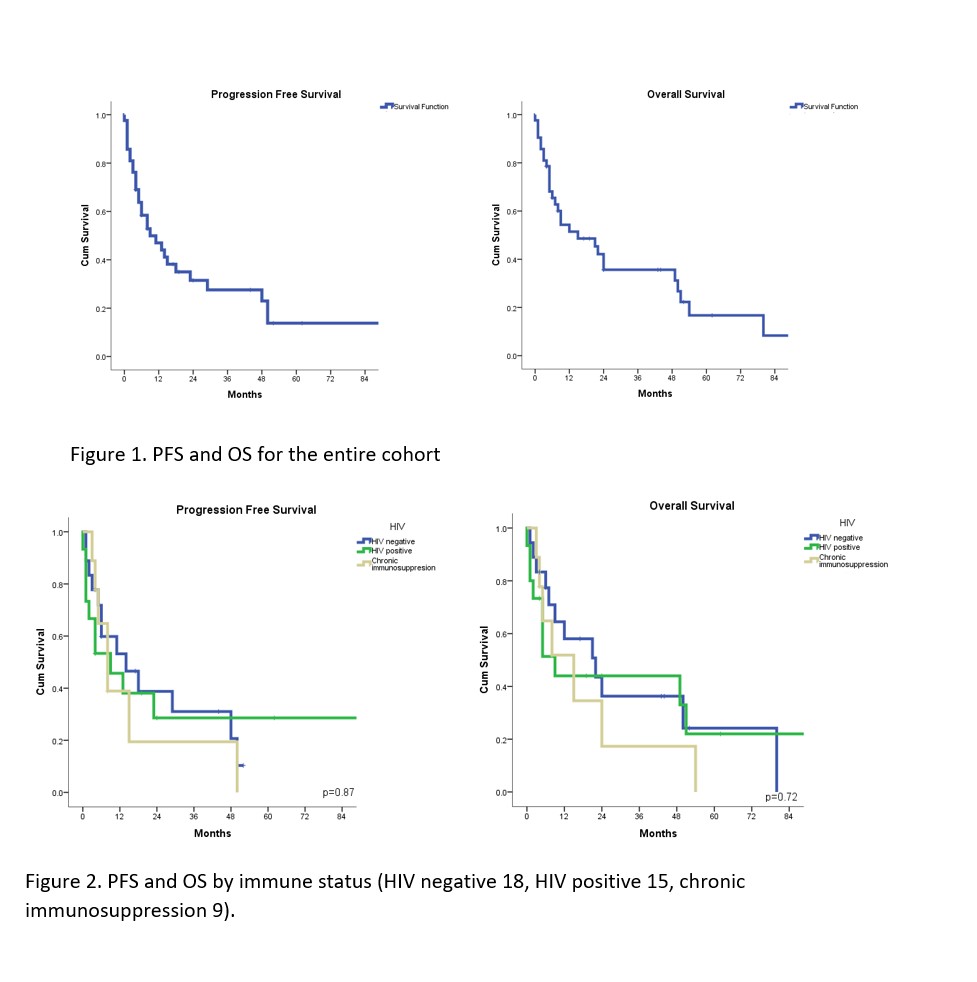