2985 Outcome of Limited Stage Peripheral T-Cell Lymphoma after CHOP(-like) Therapy: A Population Based Study of 251 Patients from the Nordic Lymphoma Epidemiology Group

Peripheral T-Cell Lymphomas (PTCLs) constitute a rare, heterogenous group of aggressive lymphomas with worse outcomes than their B-cell counterparts. The poor prognosis of PTCLs is partly informed by the majority presenting with advanced stage disease. Limited stage PTCL is infrequent, and the isolated outcomes of these cases are not well-described.

To report the outcomes and prognostic factors for limited stage nodal PTCLs in a population-based setting.

The study was based on the Danish and Swedish population-based lymphoma registries. Adult patients (≥18 years) diagnosed with limited stage nodal PTCLs (stage I or II) and treated with at least one cycle of CHOP(-like) therapy +/- radiotherapy in the surveyed time period 2000-2014 were included. Patients were identified using the national registries and their medical records were reviewed by local investigators. The endpoints were overall survival (OS) measured from diagnosis until death from any cause and progression-free survival (PFS) measured from diagnosis until progression/relapse or death from any cause. Outcomes were described for all patients and by histological subtype and disease stage. Cox proportional hazard models were used to identify clinicopathologic variables associated with outcomes in limited-stage PTCL.

A total of 251 patients with a median age of 61 years (range 18-89) were included. 959 patients who were diagnosed with Ann Arbor Stage III and IV disease in the same time period were not included. The male:female ratio was 1.9, and the distribution of histological subtypes was PTCL not otherwise specified (PTCL NOS, 37%), angioimmunoblastic T-cell lymphoma (AITL, 6%), and anaplastic large-cell lymphoma (ALCL, 57%). 31% of ALCL patients had ALK+ disease. Stage I was less frequent than stage II (46% vs 54%), 27% of patients had extranodal involvement, and 34% had elevated LDH. Overall, 33% of the patients received less than 6 cycles of CHOP(-like) treatment, and 37% received consolidation radiotherapy. Consolidation with autologous stem cell transplantation was given to 15% of the patients. Median follow-up for the entire cohort was 127 months and 5-years OS and PFS estimates were 58% (95% CI 53-65) and 52% (95% CI 47-59) respectively. The 5-year PFS for stage I and II was 53% (95% CI 44-63) and 52% (95% CI 44-61), respectively, (P=0.79) and no significant PFS differences were observed between PTCL subtypes (P=0.23, Figure 1). In both univariable and multivariable analyses, age ≥ 60 years, ECOG >0, and B-symptoms were associated with inferior PFS and OS. Ann Arbor (stage I vs II), extranodal disease and LDH were not independent predictors of PFS or OS. Details on staging modality (PET/CT vs CT) were available for 194 patients, but PET/CT-established limited stage disease was not associated with better outcomes. 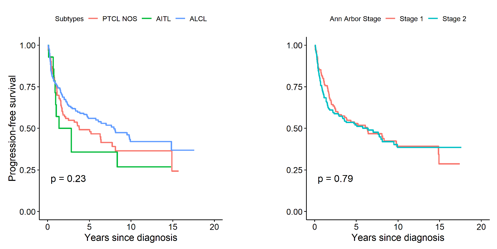