1231 Clinical Characteristics and Outcome of Diffuse Large B Cell Lymphoma Among HTLV-1 Carriers in Peru: A Matched Cohort Study

Background: Diffuse large B-cell lymphoma (DLBCL) is the most common variant of non-Hodgkin lymphoma (NHL) accounting for approximately 30% of the NHL cases worldwide. Previous reports have associated certain viral infections with the development of DLBCL such as HIV and EBV, both infections related with an aggressive clinical course and worse outcome. The human T-lymphotropic virus type 1 (HTLV-1) is a retrovirus regarded as the pathogenic agent for adult T-cell lymphoma/leukemia. HTLV-1 is endemic in Japan, the Caribbean basin, South America, and parts of Africa. In Peru, up to 3% of the healthy adult population carries HTLV-1. As data on the impact of HTLV-1 infection in DLBCL outcomes is scarce, we aim to describe the clinical features and outcomes of HTLV-1-positive patients with a pathological diagnosis of DLBCL.

Methods: We retrospectively reviewed medical records of patients diagnosed and managed for DLBCL at the National Institute of Neoplastic Diseases in Lima-Peru between 2007 and 2019. Patients were evaluated for HTLV-1 infection at the time of diagnosis. Positive HTLV-1 cases were matched to negative HTLV-1 controls based on age, sex, and cancer staging. Treatment responses were assessed according to the Lugano criteria. Overall survival (OS) and event-free survival (EFS) curves were estimated using the Kaplan-Meier method and compared with the Log-rank test to determine the impact of HTLV-1 infection. Multivariate Cox regression models were reported with adjusted Hazar Ratios (aHR) with a 95% confidence interval (95% CI).

Results: A total of 192 patients with DLBCL were identified and had sufficient data for analysis. Seventy (37%) cases were positive for HTLV-1 infection and 122 (63%) were not. Table 1 summarizes the clinical features and outcomes of DLBCL patients according to HTLV-1 status. Overall, the majority of patients were ≥65 years (59%), had ECOG performance status ≤2 (95%) and were stage III-IV (51%) at diagnosis. One third (n=64) of patients had extranodal involvement with 71 affected sites of which bone marrow involvement was frequently found in HTLV-1-negative DLBCL cases (55% vs. 7%, p<0.001) and liver/gastrointestinal tract in HTLV-1-positive cases (48% vs. 9%, p<0.001). There was no difference among DLBCL groups regarding risk stratification based on NCCN-IPI score (p=0.394). With a median follow-up of 6.5 years, we found that in DLBCL patients, HTLV-1 infection had no significant impact in 5-year OS (HTLV-1-positive 40% versus HTLV-1-negative 42%, p=0.930) and EFS rates (HTLV-1-positive 33% versus HTLV-1-negative 32%; p=0.890) (Figure 1). Multivariate cox regression analysis could not identify HTLV-1 infection as a risk factor for higher mortality or disease progression (Figure 1).

Conclusion: To the best of our knowledge, this is the largest case series describing the clinical characteristics and outcome of HTLV-1-positive DLBCL patients. A study from Japan on early stage localized (head and neck) B-cell-NHL (n=198, HTLV-1 seropositive n=21 and with DLBCL n=12) treated with radiotherapy and/or multi-agent chemotherapy found poorer prognosis on HTLV-1 carriers compared to non-carriers (5-year OS: HTLV-1-positive n=21, 49% vs. HTLV-1-negative n=177, 78%, p=0.007; Hiroaki et al BJH 2003). In this study, we included DLBCL patients with both early and advanced stage disease along with localized and extranodal involvement. We found that HTLV-1 infection had no significant impact on 5-year OS and EFS rates when using conventional therapy for DLBCL. Moreover, we did not find differences in relapsed and mortality rates. Further investigation is needed to confirm the potential impact of HTLV-1 infection in DLBCL outcome. 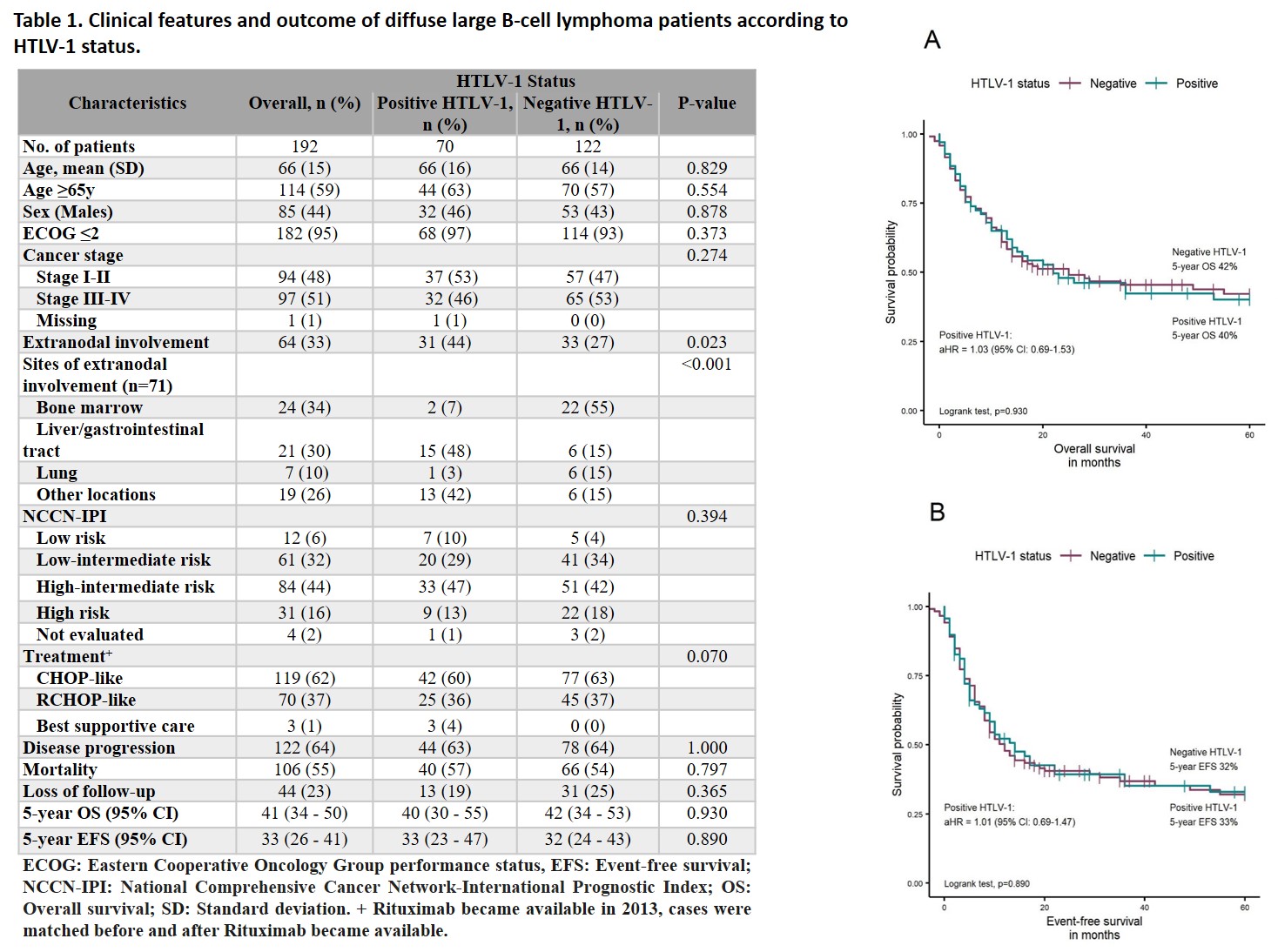