Materials and Methods: The retrospective study was approved by Moffitt institutional review board (IRB). We searched our in-house NGS database with ~6000 patients and clinical databases to identify the patients with MM and sustained cytopenia with accompanying NGS data. The NGS results were analyzed for associations with myeloma and myelodysplasia.

The Mutational profiles of the four disease groups are displayed in Figure 1 and compared in Table 1 and 2. The MM+Myelodysplasia group showed highest percentage of mutations (88.89% of patients tested), followed by Myelodysplasia_Only group (57.14%) and MM_Only group (35.24%), with Negative_for_Both group showing the lowest mutation rate (30.00%). The average number of somatic mutations/case also followed the same order: 1.63, 1.00, 0.48, and 0.36, respectively. Of the 196 patients, 58 patients (29.59%) had no morphologic dysplasia or myeloid-related cytogenetic abnormalities but showed one or more somatic mutations by NGS. These patients harbored clonal cytopenia of uncertain significance (CCUS) clones and would have been missed without NGS testing. Of these 58 patients, retrospective review actually identified 7 patients with morphologic dysplasia and were reclassified as MDS.

Further mutational analysis revealed the following interesting findings. ASXL1, DNMT3A, KRAS, and SF3B1 mutations showed highest frequencies in MM+Myelodysplaisa group when compared with other 3 groups (Table 2), indicating a close association with myelodysplasia development in patients with persistent myeloma. In contract, among the 4 groups, RUNX1 mutations were most common in Myelodysplasia_only patients, suggesting a potential alternative pathway for myelodysplasia development in patient with myeloma in remission. It is possible that presence of myeloma clones create different evolution pressure on neoplastic myeloid clones. TP53 mutations were present in MM_Only group, but were much more frequent in patients with MM+Myelodysplasia and Myelodysplasia_only groups. The presence of TP53 mutations might therefore suggest increased risk for myelodysplasia. Finally, TET2 were similar between these groups and therefore not of significant diagnostic value.

Conclusion: NGS testing is valuable in identifying CCUS, MDS, or tMN in myeloma patients, especially in those with no morphologic or cytogenetic abnormalities. Statistically significant differences are seen in the mutational profiles of the four groups of patients, suggestive of different roles in myelodysplasia development. Further studies are necessary to better distinguish the origin of these mutations as being derived from the myeloma versus the myeloid components of the disease. 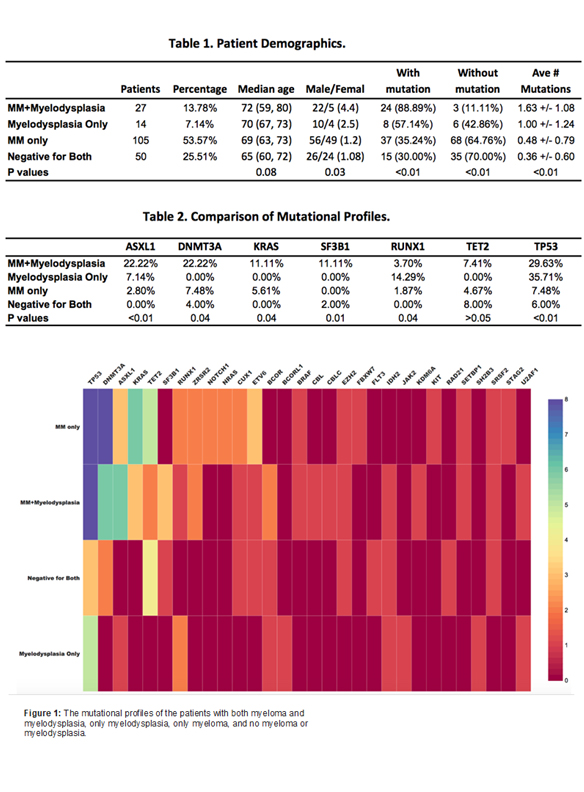