Background: Despite significant advances in the treatment of multiple myeloma (MM), it remains an incurable malignancy and novel treatments are still desperately needed. Daratumumab, a human IgG1 anti-CD38 monoclonal antibody, is an essential component of several regimens approved for the treatment of both newly diagnosed (NDMM) and relapsed/refectory myeloma (RRMM), however nearly all patients exposed to this agent eventually acquire resistance. Daratumumab (Dara) has known immunomodulatory effects including reducing CD38-expressing immunosuppressive regulatory B- and T-cells, and CD4+ T-helper cells and CD8+ cytotoxic T-cells, leading to increased CD8+:CD4+ and CD8+:Treg ratios. Additionally, CD38 has been shown to be upregulated in solid tumors which acquire resistance to PD-1/PD-L1 blockade. Pembrolizumab (Pembro) a humanized IgG4 monoclonal PD-1 antibody has previously shown limited clinical activity in combination with the immunomodulatory agents lenalidomide or pomalidomide in early phase trials. Although phase 3 trials did not confirm the benefit of Pembro in combination with immunomodulatory drugs, alternative combinations are being explored in clinical trials. Given their overlapping mechanisms, we hypothesize that the combination of Dara and Pembo will lead to increased anti-myeloma activity while maintaining an acceptable safety profile.

Methods: We are conducting a phase 2 single arm trial of the combination of Dara and Pembro in RRMM patients previously treated with 3 or more lines of therapy, including an immunomodulatory agent, proteasome inhibitor, and daratumumab (ClinicalTrials.gov NCT04361851). Subjects will receive Dara-Pembro induction for 6 cycles (Q21 days) followed by Dara-Pembro maintenance until relapse or progression. Dara will be dosed at 16 mg/kg administered intravenously at days 1, 8 and 15 for the first 2 induction cycles and 16 mg/kg at days 1 and 15 of each cycle thereafter. Pembro will be dosed at 200 mg administered intravenously on day 1 of each cycle. Response/progression parameters will be assessed using IMWG criteria. Toxicity will be assessed during treatment via NCI CTCAE v. 4.03. Bone marrow aspirates and serial peripheral blood samples will be collected for correlative studies. The primary endpoint is 8-month progression-free survival (PFS) with response compared to the historical control of single agent daratumumab.

Classically, single agent Dara has resulted in a median PFS of 4 months in a similar (although Dara naïve) population which corresponds to an 8-month PFS of 25%. For this population of subjects treated with Dara + Pembro, the aim is to improve the 8-month PFS rate to 50%. An optimum Simon 2-stage design will be used to test the hypothesis that the 8-month PFS rate is less than or equal to 25%. Sixteen subjects will be enrolled in the first stage, and if at least 5 of the 16 patients are alive and progression free at 8 months, an additional 17 subjects will be enrolled (total of 33 subjects). If at least 13 of 33 subjects are alive and progression free at 8 months, the null hypothesis will be rejected. Assuming a one-sided α = 0.05 significance level, this sample size will provide 90% power to reject the null hypothesis, assuming the true 8-month PFS rate is 50%. 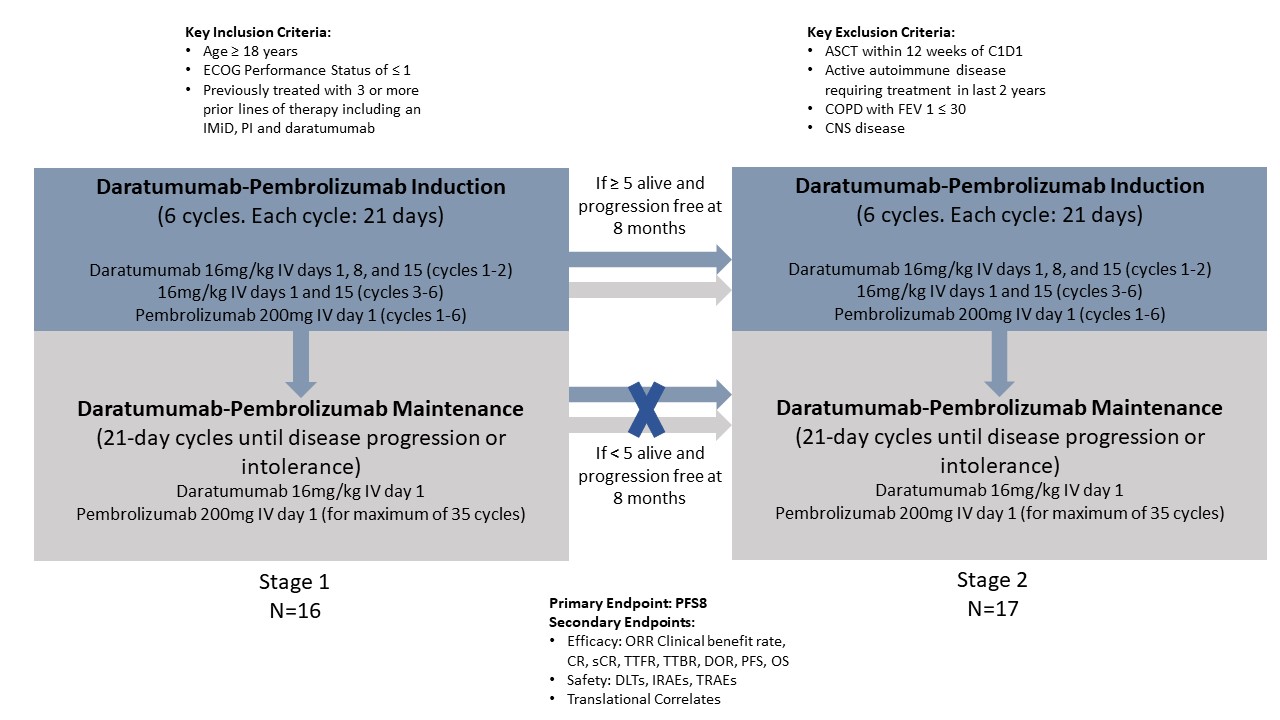