162 CAR2.0 Therapy for the Management of Post-Transplantation Relapse of B-Cell Acute Lymphoblastic Leukemia

BACKGROUND: Allogeneic haematopoietic stem cell transplantation (allo-HCT) is a standard treatment for relapsed/refractory B-cell acute lymphoblastic leukemia (r/r B-ALL). However ~30-40% of patients (pts) still relapse after HCT. We report a cohort of 20 r/rB-ALL pts, who relapsed after HCT, and enrolled in the CAR2.0 study receiving one or two types of CAR-T cells targeting various B-ALL antigens.

METHOD: Pts with r/r B-ALL who relapsed after allo-HCT and did not have significant active comorbiditeis, were enrolled in the study. The target antigens were determined based on immunostaining of each pt’s leukemia cells, and CAR-T infusions included a single, or a combination of CAR-Ts targeting the following antigens: CD19, CD22, CD123 and CD38. T cells were collected from pts (N=4) or their allogeneic donors (N=16) and transduced with an apoptosis-inducible, safety-engineered lentiviral CAR with the following intracellular signaling domains: CD28/CD27/CD3ζ-iCasp9 (4SCAR). Pts received cyclophosphamide/fludarabine lymphodepleting therapy before infusion of 0.2-5.8x106 CAR-T/kg per infusion. In addition to disease response, we carefully monitored the quality of apheresis cells, efficiency of gene transfer, T cell proliferation rate, CAR-T infusion dose, and the CAR-T copy number in peripheral blood.

RESULTS: Among the 20 enrolled pts, 11 were <18 years of age, and 7 were BCR- ABL (P190) positive. Before CAR-T treatment, 7 pts had ≤grade 2 active graft-versus-host disease (GVHD), and 13 pts received chemotherapy or targeted therapy after their relapse post HCT. Six pts had extramedullary relapse and 2 of them also had bone marrow relapse. The tumor burden in bone marrow ranged from minimal residual disease (MRD) negative to 66% of blasts, based on flow cytometry before CAR-T therapy. Five pts had >10% blasts in bone marrow, 8 pts had <3% blasts, and 7 pts had MRD negative bone marrow (summarized in the Table below). Based on the GVHD history, chimerism state and the available T-cell sources, 16 pts used allogeneic HCT donor T-cells for CAR-T preparation. All pts were full donor chimeras prior to CAR-T infusion, except one pt who had 41% donor cells in bone marrow. Eleven pts received a single CD19 CAR-T infusion, with a mean dose of 1.6x106 CAR-T/kg, and ten achieved an MRD remission and one had progressive disease (PD) within 60 days by flow cytometry. The remaining 9 pts received 2 CAR-Ts (CD19 plus CD22, CD123 or CD38 CAR-Ts) given on the same day, and resulted in 8 CR and 1 PD within 60 days. After CAR-T infusion, no cytokine release syndrome (CRS) was observed in 8 pts, and 12 pts experienced CRS of grade 1, which was consistent with the previously described low toxicity profile of the 4SCAR design. Acute GVHD ≤ grade 2 developed in 5 pts within one month following CAR-T cell infusion but all responded well to supportive care and/or cyclosporine infusion. The 2 pts who developed PD after CAR-T infusion included the one with 41% donor chimerism and had grade 2 GVHD and active infections before CAR-T infusion. The other pt with PD following CAR-T had severe bone marrow suppression, low leukocyte count, infections and was transfusion dependent before enrollment. This emphasizes the need for controlling comorbidities before infusion of CAR-T cells. In summary, total 18 patients (90%) achieved negative MRD remission within 2 months of therapy with acceptable CRS. Four pts relapsed (after being in remission for 3 months) and 14 pts are in continued remission, 6 of which for > 1 year. None of these 20 pts received a second HCT after CAR-T infusion. GVHD developed in 5/16 (31%) pts after donor source CAR-T cell infusion within one month, but all responded well to treatment.

CONCLUSION: This study focuses on CAR-T cell therapy following relapse after HCT. While the expanded study is ongoing, we present results of the first 20 pts. Use of donor-derived or recipient-derived CAR-T products in pts who relapsed after allo-HCT is well tolerated and it may prolong life expectancy of these pts while maintaining good quality of life. 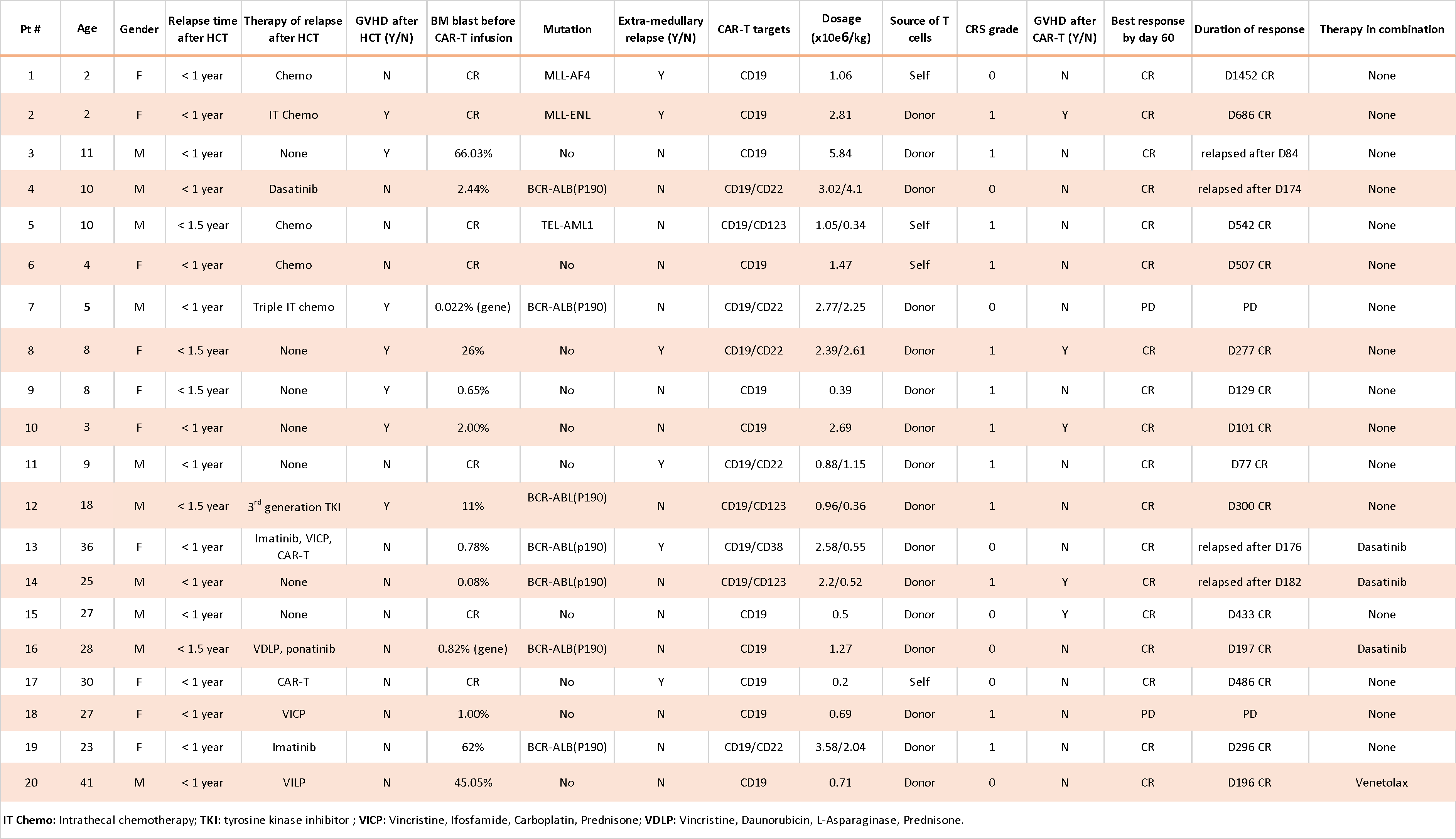