2525 Intensity of Front-Line Regimen Is Associated with Admissions, in-Hospital Days, and Discharge Destination in Older Adults with Acute Myeloid Leukemia: A Population-Based Analysis

Introduction
Acute myeloid leukemia (AML) is predominantly a cancer of older adults, with median age at diagnosis of 68 years. Traditionally, AML is treated with intensive induction chemotherapy; however, older adults with AML are often poor chemotherapy candidates due to reduced performance status and multiple comorbidities. Recently, several non-traditional treatment regimens for AML have emerged that may offer less intense toxicity profiles compared to traditional chemotherapy, can be administered in the outpatient setting, and provide new front-line options for older or frailer adults with AML. We hypothesized that relative to traditional cytotoxic chemotherapy, these non-traditional options would be associated with fewer hospital admissions, fewer days in-hospital, and more frequent discharges to home rather than skilled nursing facilities among newly diagnosed older AML patients.

Methods
Patients ≥ 60 years with a first diagnosis of AML in the California Cancer Registry (CCR) between 2014-2017 were included. Front-line treatment regimen was manually abstracted from unstructured free-text fields in the CCR and categorized as no treatment, traditional cytotoxic chemotherapy, or non-traditional therapy. Non-traditional therapy was defined as a hypomethylating agent and venetoclax in monotherapy or combination, liposomal cytarabine and anthracycline, or non-cytotoxic targeted agents. The CCR was linked with statewide hospitalization data to obtain number of in-hospital days and number of admissions during the first 100 days following diagnosis as well as discharge destination (home/usual care vs non-home location).

Of the 2,443 patients with at least one hospitalization, 2,046 (83.7%) were discharged alive to either a home or non-home location; of these, 68.4% were discharged to home and/or usual self-care, 8.6% to a non-home location, such as acute rehabilitation or a skilled nursing facility, and 6.7% to hospice. The remaining patients either died in the hospital (13.5%) or had an alternate discharge destination, such as intrahospital transfer (2.7%)

Conclusions
Using a population-based approach, we demonstrate that older adults with AML receiving non-traditional induction therapies have fewer admissions, in-hospital days, and in-hospital deaths, but did not have a decreased need for skilled services upon hospital discharge. At the population level, non-traditional therapies offer new treatment opportunities for older and frailer adults with AML. Additional studies evaluating health-related quality of life among older adults treated with these approaches are needed to delineate the patient-centered benefit of these therapies relative to traditional chemotherapy. 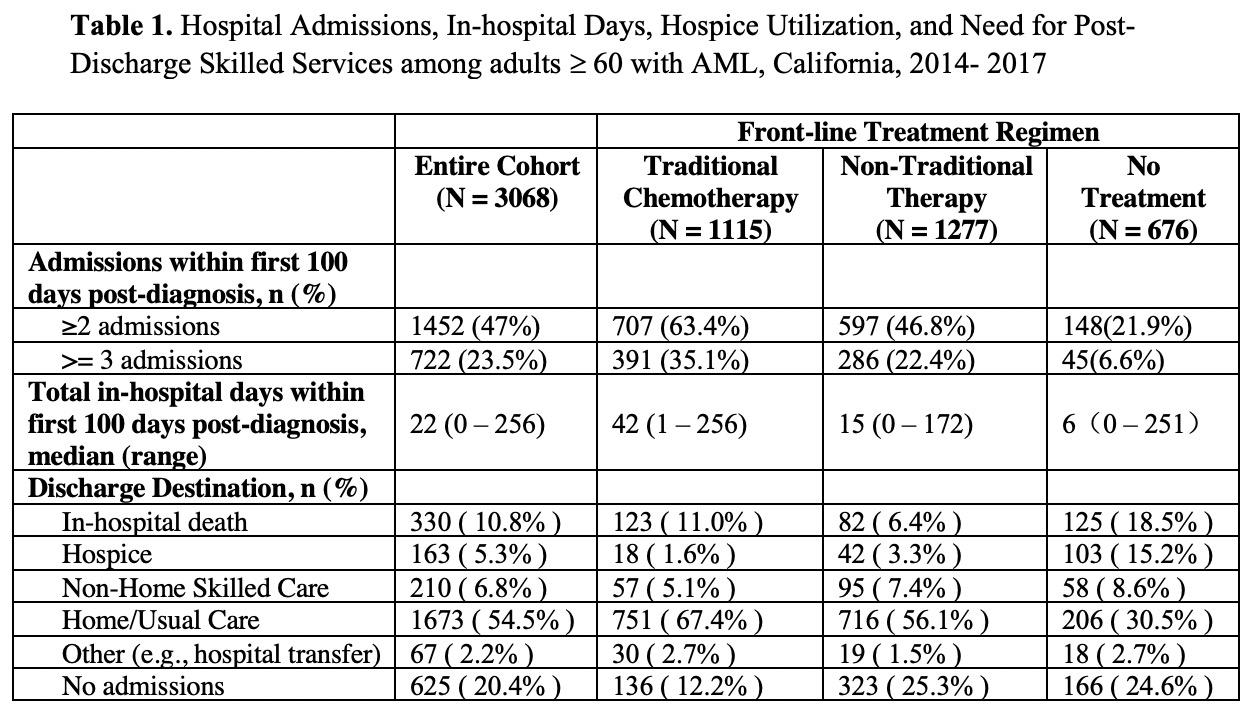