Methods: Enrolled in the study were children >28 days and <18 years of age with R/R CD19+ BCP-ALL (defined as ≥2 relapses, relapse after allogeneic hematopoietic stem cell transplant [alloHSCT], or refractory to prior treatments) and ≥5% blasts or <5% blasts but with minimal residual disease (MRD) level ≥10−3. Blinatumomab was given as continuous infusion in a 6-week cycle (4 weeks on and 2 weeks off) for up to 5 cycles and safety follow-up visit 30 days post-treatment. Patients with <25% blasts were dosed at 15 µg/m2/day, whereas those with ≥25% blasts were dosed at 5 µg/m2/day (days 1–7 of cycle 1) followed by dose increase to 15 µg/m2/day. Primary endpoint was incidence of treatment-emergent (TE) and treatment-related (TR) adverse events (AEs). Secondary endpoints included complete response (CR; <5% blasts) and MRD response (<10−4 blasts by PCR or flow-cytometry) in the first 2 cycles, relapse-free survival (RFS), overall survival (OS), and alloHSCT rate after blinatumomab treatment.

Of 110 patients treated with blinatumomab, median OS (95% CI) was 14.6 (11-24.5) months with median follow-up time of 18.2 months, which increased by 1.5 months compared with that reported in the primary analysis, with 29.9% of patients still surviving at month 24. Median RFS (95% CI ) remains unchanged at 8.5 months (4.7–14.0), with a median follow-up time of 11.5 months in patients who achieved CR; 38% of patients relapsed and 9% died. RFS was more favorable for patients who received HSCT post blinatumomab (70%) than for those who did not (30%) at month 12, respectively, which is consistent with the results from primary analysis. Among patients who had HSCT prior to blinatumomab (n= 45), median OS (95%) was 16.6 (7.1-NE) months vs 14.6 (10.9-24.5) months in patients without HSCT prior to blinatumomab (n= 65). Compared with the primary analysis, 5 additional patients received HSCT after achieving CR in the final analysis. Median OS among patients in CR after HSCT by MRD responders vs MRD non-responders was NE at 15-month analysis (Figure).

Safety results in the final analysis were consistent with those reported in the primary analysis. Of 110 patients, 99% experienced TEAEs, with 65% being grade ≥3 (see Table 3 for details). TRAEs were reported in 74% of patients; 26% were grade ≥3 and 19% were deemed serious. Details on grade ≥3 TRAEs are shown in Table 3. The 9 fatal AEs, unrelated to blinatumomab, occurred due to relapse and progressive nature of the disease (Table 3).

Conclusions: Overall, the safety and efficacy results from the final analysis are consistent with those reported in the primary analysis as no new safety signals were observed. These findings strengthen the observation that blinatumomab demonstrates durable efficacy and is a suitable treatment option in children with R/R BCP-ALL. 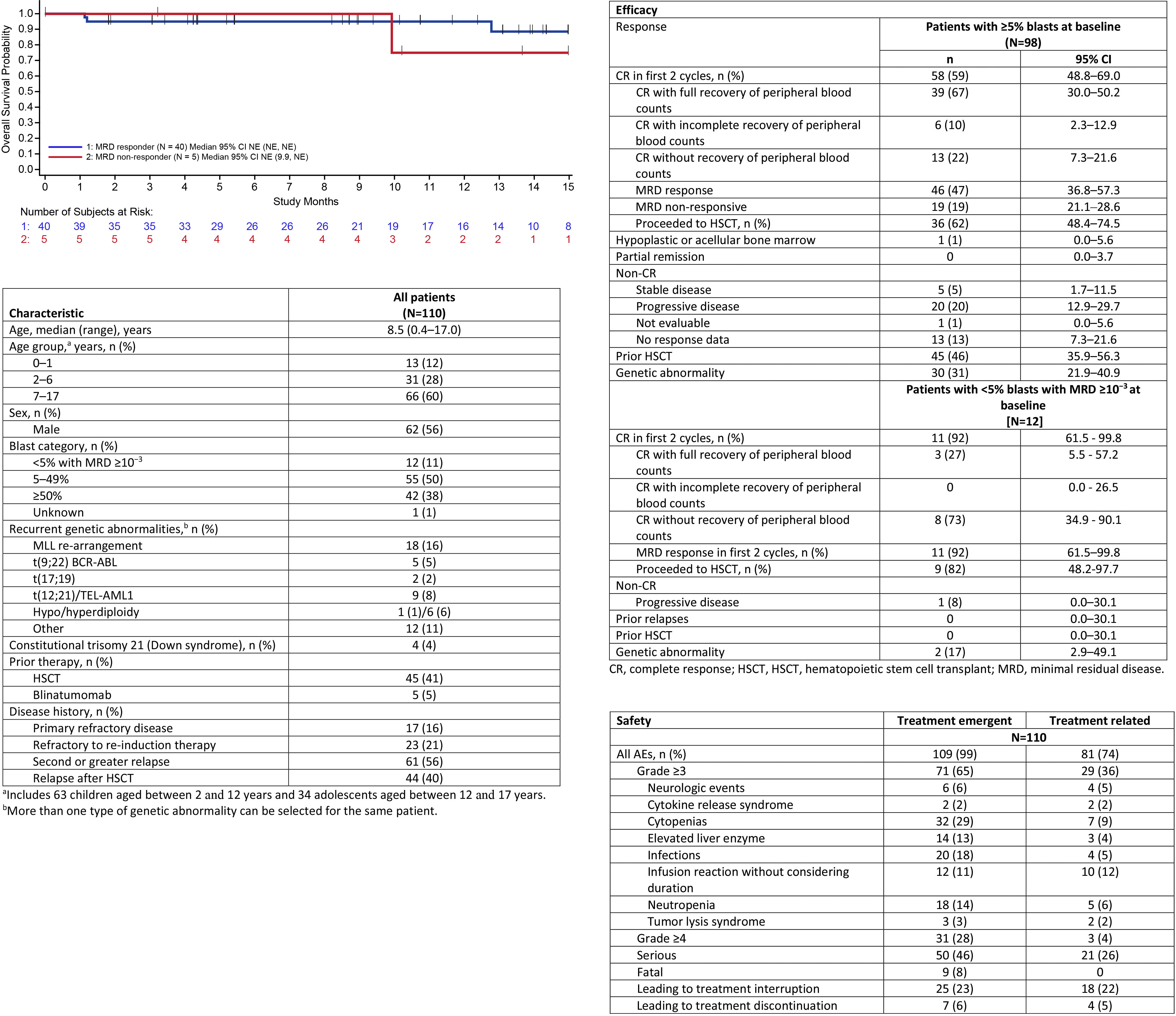