Introduction: Platelet surface glycoproteins (GPs) are highly glycosylated and are key elements for platelet function since most of them constitute receptors for adhesion ligands. However, exact role of their glycan composition is not clear. Under normal conditions, platelets contain sialic acid in the carbohydrate side chains of their GPs, and it has been described that alterations in the degree of their sialinization can affect the clearance of platelets. This mechanism has been proposed as involved in etiopathogenesis of immune thrombocytopaenia (ITP), mainly in those patients who do not respond to treatments. Thus, after the loss of sialic acid, there would be a greater exposure of galactose and of N-acetyl-glucosamine residues on the surface of circulating platelets to hepatic Ashwell-Morell receptors, which could induce their phagocytosis and platelet clearance. On the other hand, procoagulant platelets, defined as the platelet subpopulation that binds functional prothrombinase, exposed on their surface increased levels of P-selectin and GPIb, two glycan rich GPs. So, it is tempting to speculate that changes in glycan residues on platelet surface may induce changes in their function.

Aim: We aimed to assess in ITP patients whether changes in platelet glycosylation, mainly the loss of sialic acid, may condition platelet function, apoptosis and binding of prothrombinase complex.

Results: Platelets from ITP patients with a platelet count <30x103/µL exposed less sialic acid in correspondence to an enhanced binding of lectins to non-sialylated residues. Moreover, levels of α1,6-Fucose, a glycan residue which could directly regulate antibody-dependent cellular cytotoxicity, and of α-Mannose, which could be recognized by the mannose binding lectin and activate complement pathway, were increased in platelets from these ITP patients. In accordance, sialic acid loss and consequent platelet surface exposure of other glycoside residues were inversely related to platelet count and ability to be activated (Table 1).

These differences in glycosylation observed in ITP patients with a platelet count <30x103/µL were accompanied by a less ability of platelets to be activated (Figure 1), an increased exposure of phosphatidylserine and higher caspase activites (Figure 2). Moreover, increased exposure of phosphatidylserine and of N-acetyl-glucosamine residues (measured through the binding of WGA) enhanced binding of prothrombinase complex (Figure 3).

Conclusion: Changes in glycoside composition of GPs on platelet’s surface impaired their functional capacity, increases their apoptosis and modifies conditions for the binding of coagulation proteins. These modifications in platelet’s glycoside residues seem to be related to severity of ITP. 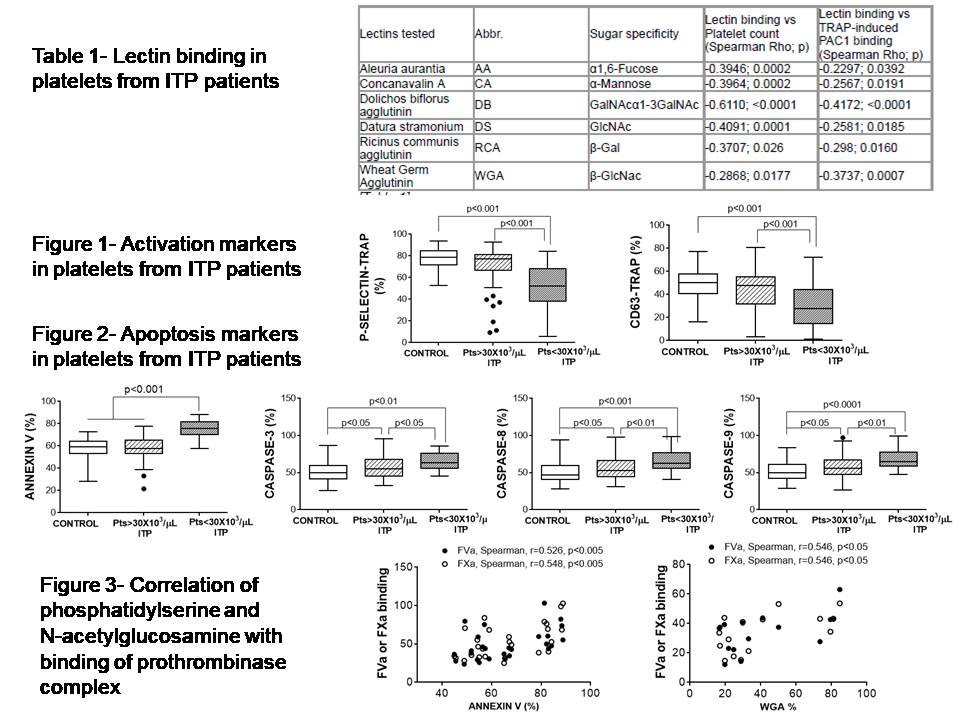