Atypical Hemolytic Uremic Syndrome (aHUS) is a disease characterized by microangiopathic hemolytic anemia, thrombocytopenia, and acute kidney injury. aHUS is usually caused by a predisposing germline variant in a complement regulatory gene, and a second hit of a complement amplifying condition such as infection, pregnancy, or inflammation.However, only approximately 50% of aHUS patients have identifiable genetic variants, with variants in factor H (CFH) accounting for 20%-30% of the genetic predisposition, C3 for 7%, membrane cofactor protein (MCP)/CD46 for 8%, factor B (CFB) for 2% and factor I (CFI) for 6%. For the other 50% of the patients, the genetic predisposition remains elusive. CFH binds to α2,3 sialic acid (SA) linked glycans on host cell surfaces and protects against attack by the alternative pathway of complement (APC). We hypothesized that the biosynthesis of SA is essential to complement regulation and SA biosynthesis defects predispose to aHUS.

We performed targeted sequencing on 34 aHUS patients and 43 healthy controls for 4 genes that are responsible for the de novo biosynthesis of sialic acid: GNE, NANS, NANP, and CMAS. Then we used CRISPR-Cas9 and lentivirus systems to manipulate these genes in TF1 or TF1 PIGA-null cells, which lack the glycophosphatidylinositol-linked cell surface complement regulators CD55 and CD59, and allow the APC cascade to proceed once activated. α2,3 SA levels on the cell surface were measured with Maackia Amurensis lectin II (MAL II). Finally, we studied the functional consequences of these genetic changes. Normal human serum (NHS) was used to activate the APC on cells, and factor D (CFD) depleted serum (D-Dpl) was used to specifically block APC activation. C5b-9 deposition and CFH binding capacity on cells were detected by flow cytometry, and complement induced cell killing was detected via a WST-1 cell viability assay (mHam).

ii) Loss of NANS but not NANP decreases α2,3 SA on TF1 cells

iii) NANS knockout increases the susceptibility to the APC

To assess the NANS variant identified in a patient with aHUS, TF1 DKO cells were transduced with a lentivirus containing the either wild type or M117I-mutated NANS, and cell-sorted to select individual clones. After treatment with sialidase to remove all SA, cells with NANS M117I had significantly lower SA level recovery compared to NANS wild type cells (Figure B). 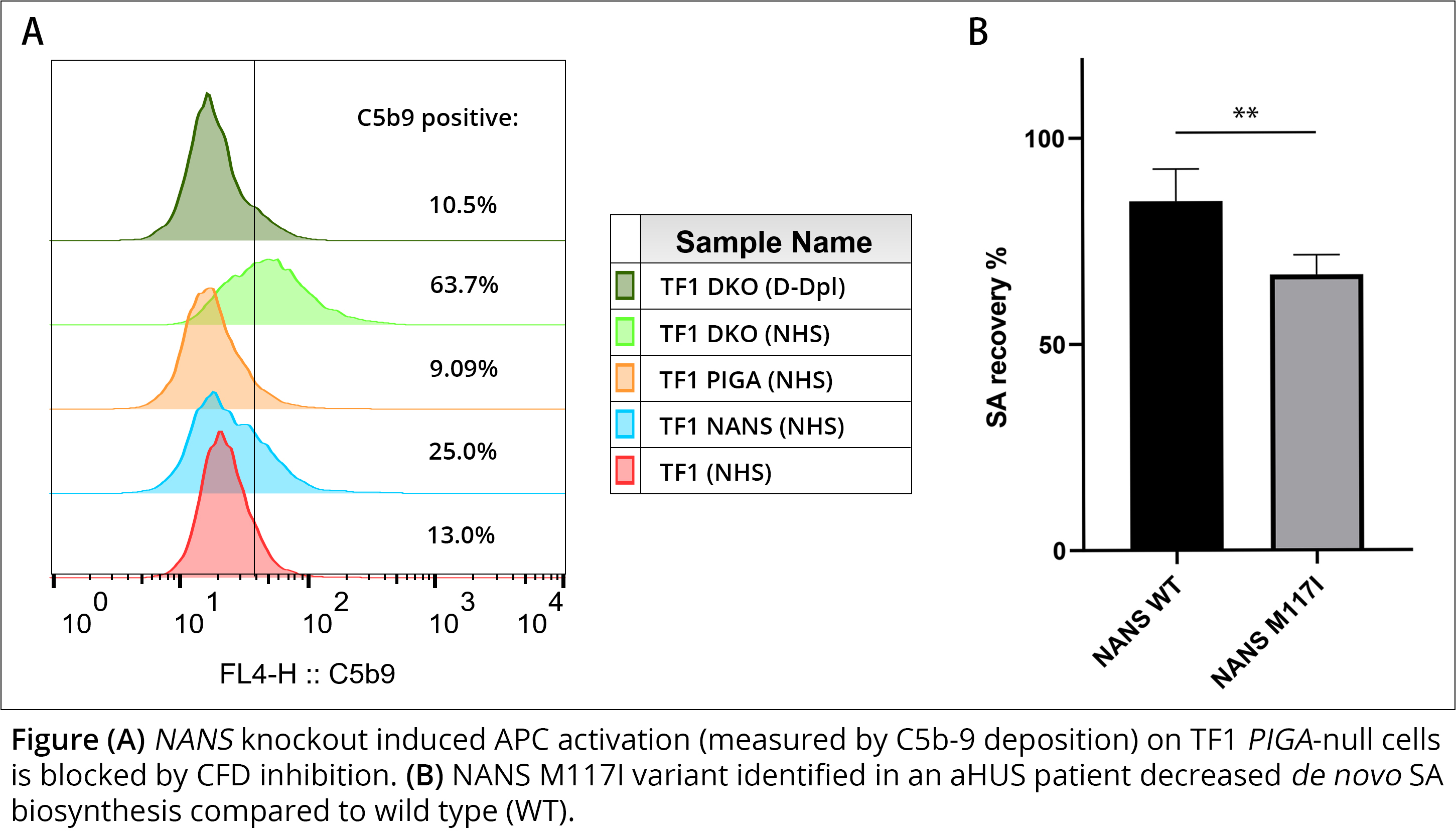