In the rituximab era, outcome data from patients (pts) receiving second-line therapy (2L) for diffuse large B-cell lymphoma (DLBCL) are derived mostly from randomized controlled trials or selected cohorts from specialized care centers. As new salvage strategies emerge, there is a need to reevaluate the landscape of 2L DLBCL (treatments and outcomes) in real-world (rw) patient cohorts. We investigated the timing of 2L in a cohort of US pts with DLBCL, the utilization of autologous stem cell transplantation (ASCT) as consolidation, and the overall survival (OS) in these pts.

We included patients from the Flatiron Health electronic health record (EHR) derived, de-identified database, with a first incident DLBCL diagnosed after January 2011, and with documented 2L therapy receipt (n=524). All pts received ≥4 doses of an anthracycline-based immune-chemotherapy in the frontline therapy (1L) setting and initiated 2L active immune-chemotherapy (anti-CD20 monoclonal antibody monotherapy was excluded) prior to December 2019 to allow for at least 6 m of potential follow-up through May 31 2020. Patients with central nervous system disease at diagnosis were excluded. Real-world overall survival (rwOS) probabilities, indexed to the start of 2L, were estimated in the entire cohort using the Kaplan-Meier method. Hazard ratios (HR) comparing rwOS were estimated using Cox regression models. Baseline covariates included demographic information, DLBCL histologic subtypes, cell of origin (COO) classified by the Hans' algorithm, cytogenetics, and the time interval in months (m) from end of 1L therapy to initiation of 2L therapy. Analyses were also re-indexed to 1 and 3 years post-2L, comparing unadjusted rwOS in pts who had received ASCT on or prior to these timepoints versus those who did not.

In a contemporary cohort of rw pts with DLBCL receiving 2L immune-chemotherapy, the majority did not receive ASCT. In this setting, age ⩾70, shorter intervals between 1L completion and 2L initiation, presence of MYC translocations, and no ASCT were factors associated with shorter survival. It may be important to address the implications of these clinical features in the investigation of 2L therapy options for pts with DLBCL. 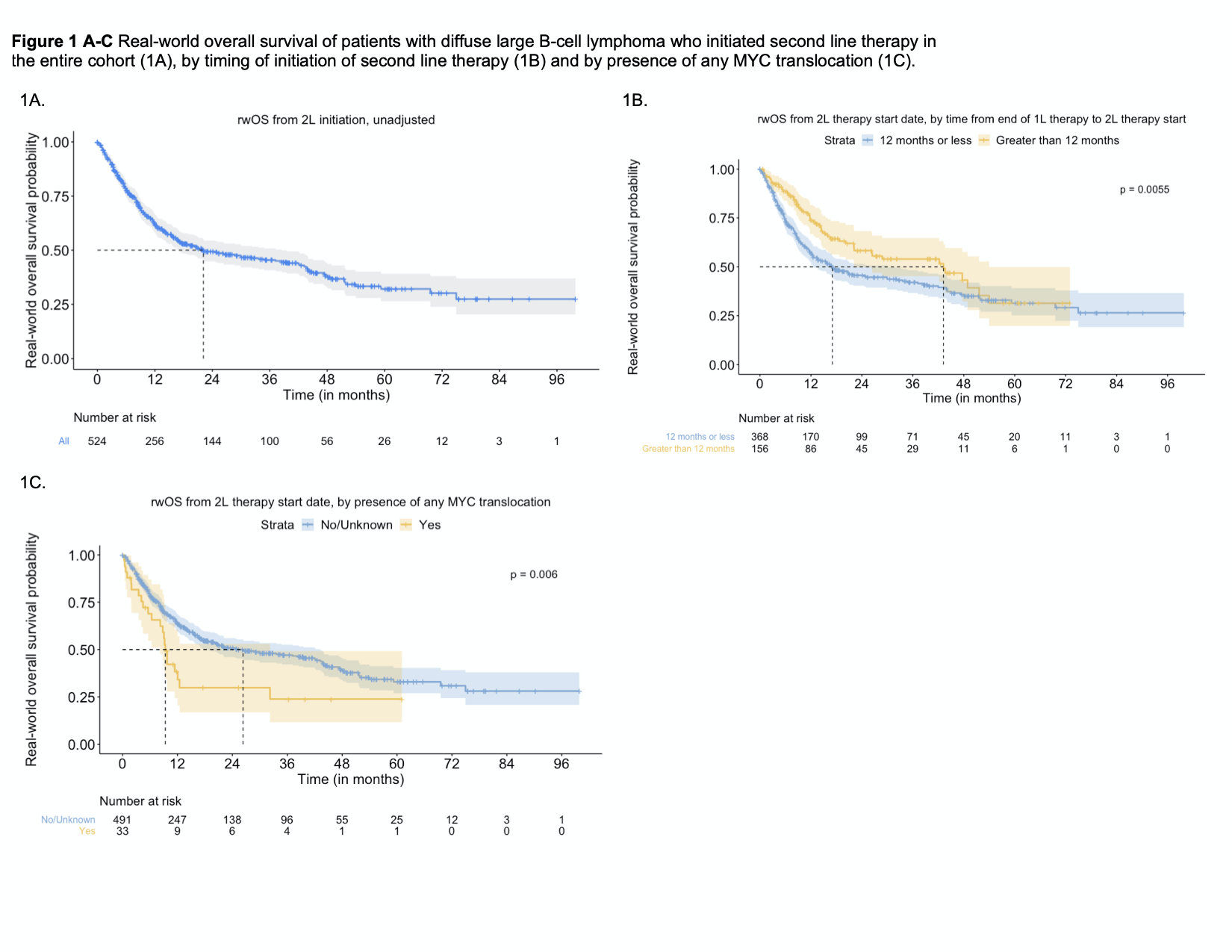