Background: Although patients with MPN may achieve complete hematological remission (CHR) with cytoreductive therapy (CRT), lifelong treatment represents a major burden for these chronically ill patients. IFN has emerged as a major MPN therapy thought to positively alter the natural history of MPN and appears to be the only drug that can provide long-term CHR after discontinuation in some patients (Hasselbalch HC et al., Seminars in Immunopathology, 2019). In this study, we aimed to identify clinical and molecular factors associated with long-term CHR after IFN treatment discontinuation and to compare clinical outcome of patients who discontinued therapy, to patients who continued IFN treatment despite achieving a CHR.

Methods: All MPN patients followed between January 2000 and May 2020 in our institution who received at least 3 months of IFN were included. Logistic regression analysis was performed to identify variables associated with long-term CHR after discontinuation. Cumulative incidence of relapse was calculated from time of IFN discontinuation, considering death without relapse as a competitive event. Overall survival (OS) and thrombotic/hemorrhagic events free survival (EFS) curves were estimated using the Kaplan-Meier method and compared by cause-specific hazard Cox models.

Results: 381 patients treated with IFN were included in the study. Median age at MPN diagnosis was 44 years [interquartile range: 33-54]. 171 had polycythemia vera (PV), 169 essential thrombocythemia (ET) and 34 primary myelofibrosis (PMF). JAK2V617F was the most frequent driver mutation (78.8% of patients), while CALR and MPL were mutated in 15.5%, and 2.9% of patients respectively. Median driver variant allele frequency (VAF) at time of IFN therapy initiation was 34% [12; 51]. Reasons to start IFN included age younger than 50 years in 44.9%, intolerance/resistance to previous therapies in 17.8% or pregnancy in 1.8% patients. CHR was achieved with IFN in 77.2% of patients.

After a median follow-up of 72.4 months [28.4; 119.7] from IFN initiation, 131 patients were still on IFN treatment, while 250 patients had discontinued therapy. No significant difference was observed between continued and discontinued IFN patients in terms of MPN subtype, initial clinical, biological or molecular characteristics. Reasons for discontinuation were toxicity in 128 (50.4%), prolonged hematological CHR in 76 (29.9%), failure in 16 (6.3%) and other in 30 (11.8%) patients. At time of IFN discontinuation, 170 (66.9%) patients were in CHR and the median driver mutation VAF was 12% [3; 35]. Of note, IFN was re-introduced in 61 patients who lost CHR with a second CHR rate of 83.6%, arguing for the absence of development of IFN resistance in post-discontinuation relapses.

Finally, we compared discontinued IFN patients who stopped IFN for CHR (n=76) to patients who obtained CHR and are still on IFN therapy (n=116). Hematological transformation could not be evaluated due to very low incidence of events: 2 patients from each group progressed to myelofibrosis while leukemic progression was only observed in 1 patient. Importantly, OS (HR 0.23, 95%CI [0.5; 1.14], p=0.07) and EFS (HR 0.53, 95%CI [0.19; 1.45], p=0.217) were not significantly different between patients who discontinued and those who continued IFN.

Conclusion: Overall, our study demonstrates that IFN discontinuation represents a safe strategy in MPN patients who achieved CHR, and particularly in patients with a driver VAF lower than 10% at time of discontinuation. Importantly, relapsed patients did not develop IFN resistance. Our data contributes to set the frame for future clinical trials evaluating the possibility of IFN treatment holidays in good responding MPN patients. 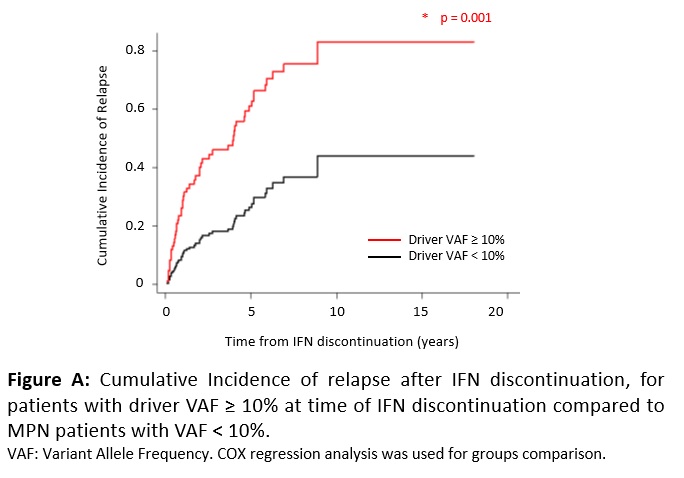