Background: Real world multi-institutional data of anti-CD19 CAR-T therapy from across the US shows similar response rates and toxicities as that of the registration trials. For axicabtagene ciloleucel (axi-cel), bridging therapy (BT) during CAR-T manufacturing was not allowed. Real world data shows that patients who received BT had lower complete remission (CR) rates, duraiton of response (DOR) and overall survival (OS). Whether the poorer outcome is due to the effect of the BT or the aggressive biology of the disease is unknown. Patients with lower disease burden had higher response rate in the registration study ZUMA-1 for axi-cel. We examined the impact of response to BT on CAR-T outcome. Specifically, we also describe our experience using polatuzumab vedotin, bendamustine and rituximab (Pola-BR), also a recently approved therapy for relapsed/refractory diffuse large B-cell lymphoma (DLBCL), prior to CAR-T as salvage (ST) and BT.

Methods: A retrospective review of 63 patients who received axi-cel for NHL from June 2016 – March 2020 at Mayo Clinic, Rochester was performed. ST was defined as the last therapy prior to leukapheresis and grouped into categories – autologous stem cell transplant (ASCT), and non-ASCT (chemotherapy and immunotherapy) . BT was defined as lymphoma-directed therapy given between leukapheresis and CAR-T infusion. Response to all lymphoma-directed therapy was evaluated using 2014 Lugano criteria. Event free survival (EFS) was defined as time from axi-cel infusion to progression, next treatment, or death. Overall survival (OS) was defined as time from axi-cel infusion to death.

Results: Patients received BT if there were concerns for symptomatic progression of disease during CAR-T manufacturing that would reduce the likelihood of eligibility to receive CAR-T. The decision and choice of BT was at the discretion of the treating physician. Sixty-eight percent (n=43) of the patients received BT (19 chemo, 24 immunotherapy). Demographics of the patients based on their response to BT are shown in table 1. More patients in the BT responder group had received chemotherapy as type of bridge (58% vs. 33%). With a median follow up of 12-months for those still alive, significant improvement in EFS was seen in patients who had partial response (PR) or stable disease (SD) to BT than patients who continued to progress (median 12 months vs. 3 months, p = 0.01) [Figure 1A]. OS however, was not significant between the two groups (median OS 18 months - responders vs. 12 months non-responders, p = 0.19) [Figure 1B].

We also describe in the case series below 11 patients who received Pola-BR in salvage setting (ST) and/or BT (Table 2). Due to the lymphopenic effects of bendamustine, it was avoided before T-cell collection if possible. Two patients, however, received bendamustine as part of Pola-BR for salvage therapy as its need was determined per the managing physician. Axi-cel was successfully manufactured for all 10 patients. One patient did not have measurable disease after Pola-BR BT and remains on observation. A second patient died before CAR-T infusion from progressive disease. Four of the nine patients treated with CAR-T remained in response. Updated outcome will be presented.

While patients who received BT have worse EFS than those who didn’t, having some control of lymphoma after BT was associated with better EFS compared to patients who continued to have progressive disease after BT. Preliminary data from Pola-BR case series shows 60% (6/10) patients achieved PR/SD before CAR-T infusion, but requires longer follow up for its impact on survival. 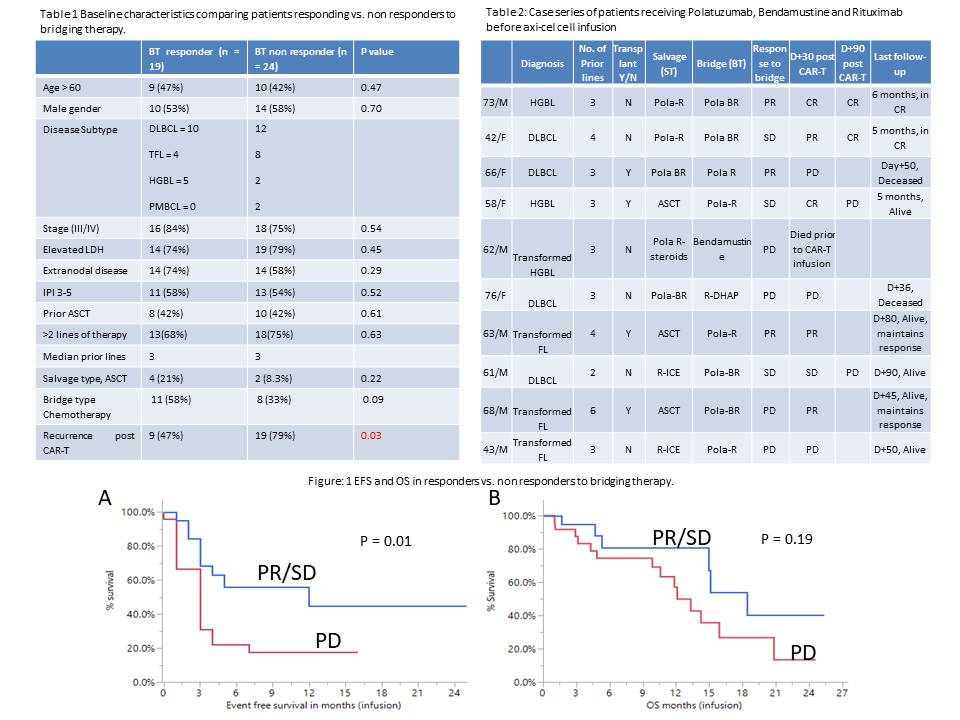