We previously reported early data from patient 1 (P1) and 2 (P2) in the ongoing Phase 1/2 study (NCT02186418), who were treated with drug product (DP) from the initial ARU-1801 manufacturing process (Process I). We now present the long-term data on these patients and early data from P3, the first patient treated with our new manufacturing process (Process II).

Conclusion: We show that engraftment of ARU-1801 and amelioration of disease is possible with RIC using IV melphalan, with persistent stable ASG expression and meaningful improvement in VOEs in P1 and P2. P1 shows stable HbFG16D and high ASG despite low, albeit stable VCN. P2 had lower HSCP engraftment, which we hypothesize was due to below target melphalan exposure. Nevertheless, significant clinical benefit was observed in P2 due to stable ASG of 22% at mo 30. It is likely that the presence of this amount of HbFG16D has provided enough ASG to prevent sickling/ineffective erythropoiesis, resulting in the preferential survival of HbF+HbFG16D-expressing RBC. Process II DP in P3 resulted in 2-4X higher engraftment of transduced HSCPs at 6 mo. Additional process enhancements are under development for future treated patients. ARU-1801, administered with RIC, holds significant promise for achieving durable responses with a favorable safety profile in patients with severe SCD. 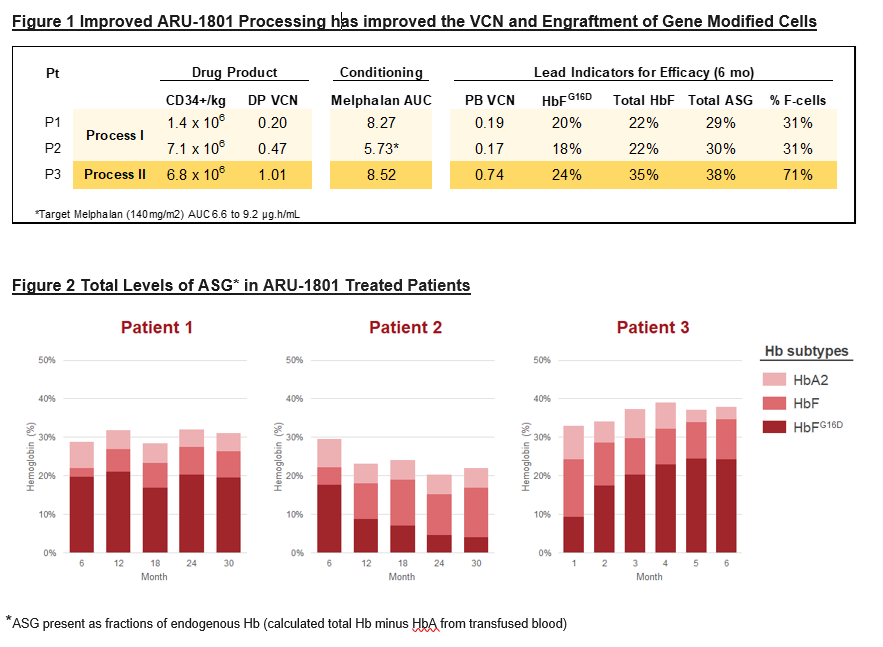