BACKGROUND: In newly diagnosed AML, high remission rates are typically achieved with IC, but the response is often transient, and detectable residual disease in the bone marrow post-chemotherapy is predictive of early relapse. Emerging data show that the identification of ≥ 0.1% MRD by multiparameter flow cytometry (MFC) in patients with AML in remission after IC is an important prognostic marker that may help guide treatment (Tx) decisions. CC-486 is an oral hypomethylating agent that allows for extended dosing schedules to prolong drug exposure over the Tx cycle. In the QUAZAR AML-001 Maintenance Trial, Tx with CC-486 300 mg QD for 14 days/28-day Tx cycle was associated with significantly improved overall (OS) and relapse-free survival (RFS) vs. placebo (PBO) in patients (pts) with AML in first remission after induction chemotherapy ± consolidation. Samples for MFC were obtained prior to randomization and serially throughout the study to assess the impact of MRD on OS and RFS, and to evaluate rates of conversion from MRD positivity (+) to negativity (–) in the CC-486 and PBO arms.

METHODS: Eligible pts aged ≥ 55 years with AML were randomized 1:1 to CC-486 300 mg or PBO within 4 months of achieving first complete remission (CR) or CR with incomplete blood count recovery (CRi). MFC assessments of bone marrow aspirates were performed centrally at screening; at cycles 3, 6, 9, 12, 15, 18, 21, 24, 30, and 36; and as clinically indicated. Samples were analyzed with a panel of 22 cell surface markers using an MRD+ cutoff of ≥ 0.1% (per ELN MRD guidelines). For pts MRD+ at baseline (BL; ie, at randomization), an MRD response was defined as achievement of MRD– for ≥ 2 consecutive assessments. MRD– duration was calculated from the time of randomization (for pts MRD– at BL) or from the first of ≥ 2 consecutive MRD– tests (for pts MRD+ at BL), until the last MRD– assessment (for pts who became MRD+) or Tx discontinuation. OS, RFS, and MRD– durations were estimated using Kaplan-Meier methods. Multivariate (MV) Cox regression analyses were performed to evaluate the association of BL MRD status (MRD+ vs. MRD–) and randomized Tx arm (CC-486 vs. PBO) with OS and RFS. 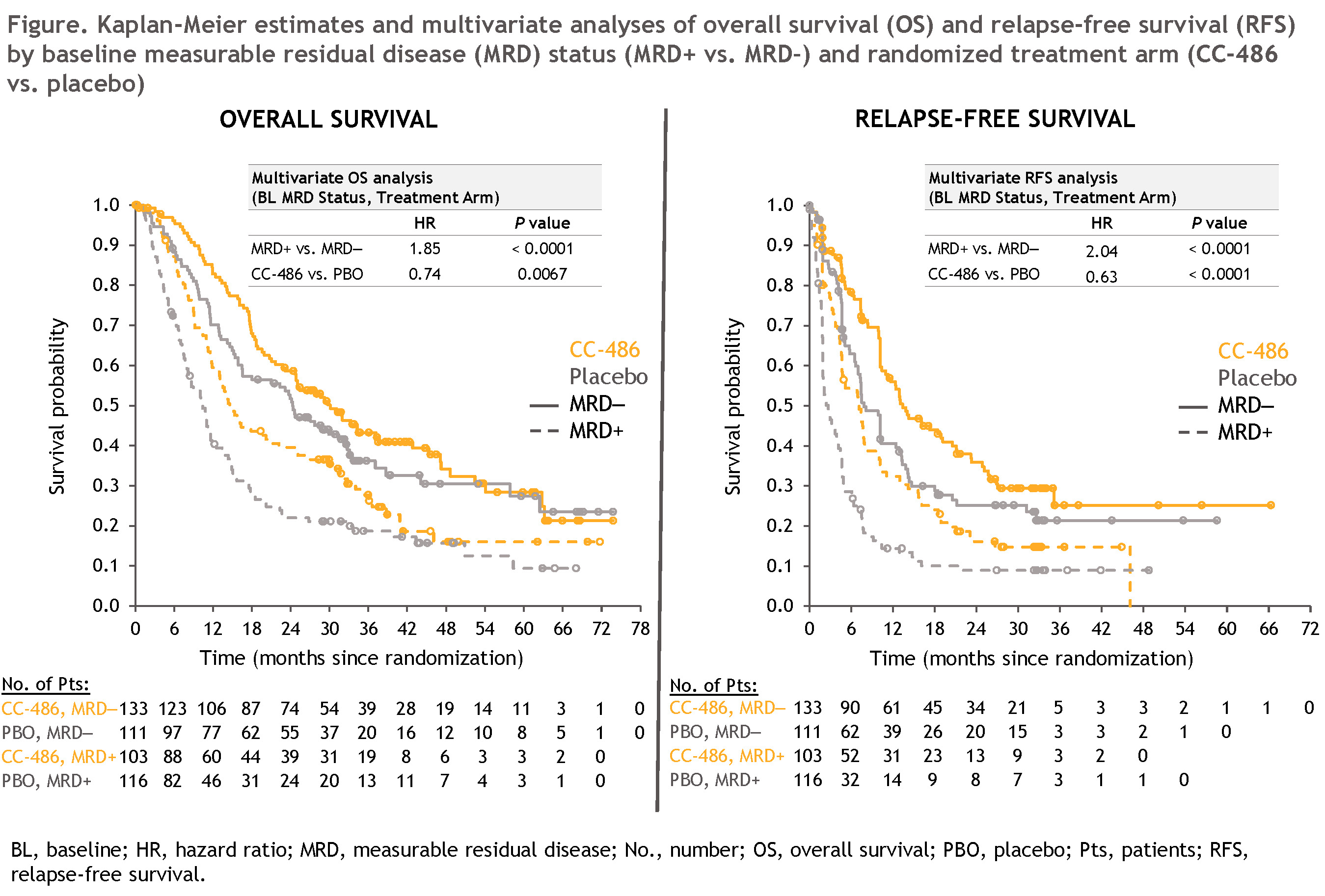