Background: Cancer care delivered in an academic setting or by providers with higher volume has been associated with improved overall survival (OS) in selected surgical and medical scenarios, including the care of patients with multiple myeloma (MM). Most studies have limited their focus to OS, and have used a simple count of similar patients as a proxy measure for disease-specific expertise. Few studies have assessed whether treatment by an oncologist that specializes in a specific patient’s cancer results in better quality care and outcomes. This latter focus may be particularly important for MM management, for which the approval of newer immunomodulatory drugs (IMiDs) and proteasome inhibitors (PIs), coupled with 1st-line PI-IMiD combinations, stem cell transplant (SCT) & maintenance therapy (MT) among fit patients, have expanded options, complexity and therapy lines. In this study, we constructed a measure reflecting oncologist sub-specialization in treatment of hematologic malignancies and examined associations between that dimension, academic care setting, and various aspects of active MM therapy as well as OS.

Methods: We selected adults with a MM diagnosis between 07/07-12/15 from the SEER-Medicare linked database. We required continuous Medicare Parts A and B enrollment and no HMO/PPO coverage from 12 months prior to diagnosis (1 month prior for Part D) through death or end of study (12/16) and MM therapy initiation w/in 12 months post diagnosis. Outcomes including 1st treatment line PI-IMiD combination, SCT, MT, and 2nd, 3rd, and 4th treatment lines were constructed by applying a complex algorithm to claims-based indicators for oral and IV drugs and receipt dates. Provider setting was assigned as academic and/or NCI designated cancer center (NCI-CC), other hospital (other teaching or non-teaching), or community (non-hospital), based on claims from the most recent hematologist or oncologist evaluation and management visit prior to 1st line initiation. The percentage of each oncologist’s patient panel diagnosed with a hematologic malignancy (HEME%) was calculated for each 3-year period, using a pooled sample of 11 major cancer sites (reported in SEER-Medicare) for the denominator; HEME% was linked back to each patient based on the oncologist of record at the visit prior to 1st line initiation. Bivariate analyses and multivariable regressions tested for associations with treatment (logistic regression) and OS (Cox proportional hazards models). Regressions controlled for demographics, health status, and diagnosis year.

Conclusion: Using a novel measure of oncologist sub-specialization in hematologic malignancies, we found strong positive associations with receipt of 1st line PI-IMiD combination therapy and ongoing treatment lines in a Medicare insured population with MM. In contrast to HEME%, care setting was less likely to be associated with treatment in our multivariable models. The bimodal distribution of HEME% within academic centers is consistent with academic acquisition of community oncology practices. Future research should consider the role of oncologist sub-specialization in other cancers and with additional outcomes, including patient care experience and cost of care. 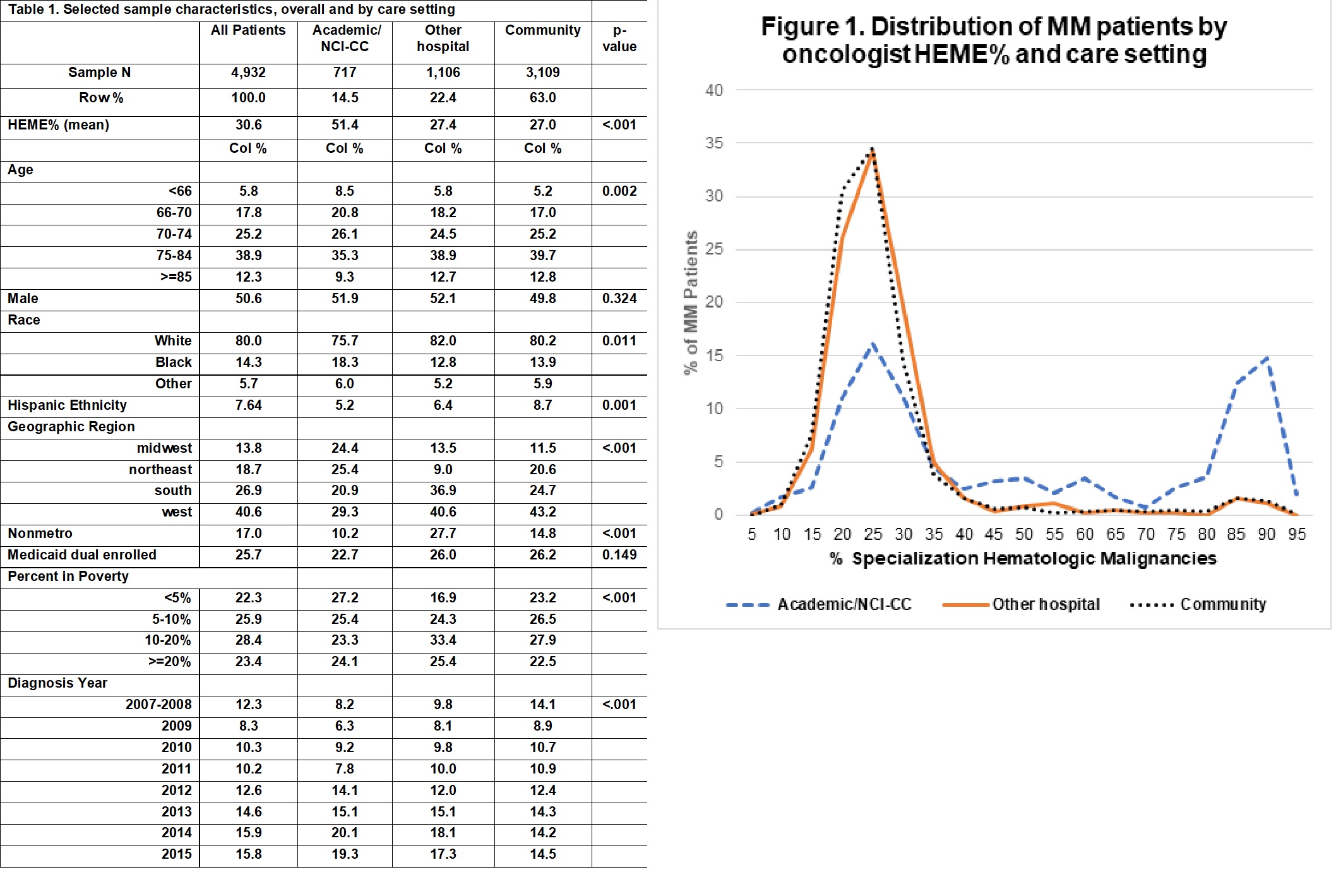