Aim: We set out to hypothesize that WGS data can be used to reliably measure the TL and that if systematically applied to well defined patient cohorts, we could test whether preservation of TL or its excessive shortening are prognostically or biologically relevant to clinical outcome.

Results: First, using bidirectional cross-confirmation with independent bioinformatics pipelines, reliability of WGS-based TL measurements (1B) was confirmed and, as anticipated, age-dependency of TL in healthy controls was reproduced (1C). Next we investigated age as a possible confounder of TL shortening in patients. While in PNH age had an expected impact, patients with AML or MDS exhibited TL decoupled from its inherent age-dependence (r=.00034, P=.72).

In general, we noted TL shortening as an overarching feature of myeloid proliferation irrespective of entity (1D). Furthermore, mutations in the promotor region of TERT were not correlated with TL. In AML or MDS, neither morphological nor genetic subclassification where associated with differences in TL (1E), with the exception of a small subset of AML and MDS patients (n=103, n=97), harboring abnormally long telomeres compared to healthy subjects. These were significantly associated with mutations in TP53 (AML P=1.91x10-6, mean TL 558.4; MDS P=.55x10-7, mean TL 414.5) but not with any other common mutation. This is surprising, since TP53 mutations are thought to protect cells from telomeric catastrophe following excessive shortening. Moreover, comparing the VAF of TP53mut AML samples with the corresponding measured TL, revealed a positive correlation (r=.2281, P=.021), irrespective of the blast count by cytomorphology (1F).

Singleton analysis from all 1648 patients revealed that in AML and MDS patients, alternative telomere repeat- variants (chiefly TTTGGG) were increased pointing towards a possible implication of alternative telomere extension (1G). Lastly, outcome analysis revealed that in AML, the presence of longer telomeres (compared to controls) was associated with worse prognosis (P=.0035) (1H). Multivariate analysis, which included age, karyotype, TP53 status and gender, revealed that this was due to the strong association with TP53 mutations (n=630 vs n=103).

The implications of our study extend beyond the realm of telomere biology and leukemia pathophysiology. Therapies targeting the telomere machinery, e.g. imetelstat, may offer an opportunity for application beyond MPN, its current indication. Ongoing studies are currently investigating its use in MDS. Based on our findings we argue that treatment may be rationally evaluated in TP53mut AML.

Conclusion: Our findings provide a rationale for (1) the use of WGS to investigate TL, (2) the fundamental discovery that TL shortening is a common principle in myeloid neoplasms, (3) TP53 mutations being accompanied with increased TL and (4) the exploitation of TL to identify subgroups eligible for treatment with imetelstat. Moreover, WGS-based TL analysis in leukemias can contribute to our understanding of TL maintenance mechanisms in leukemic genome. 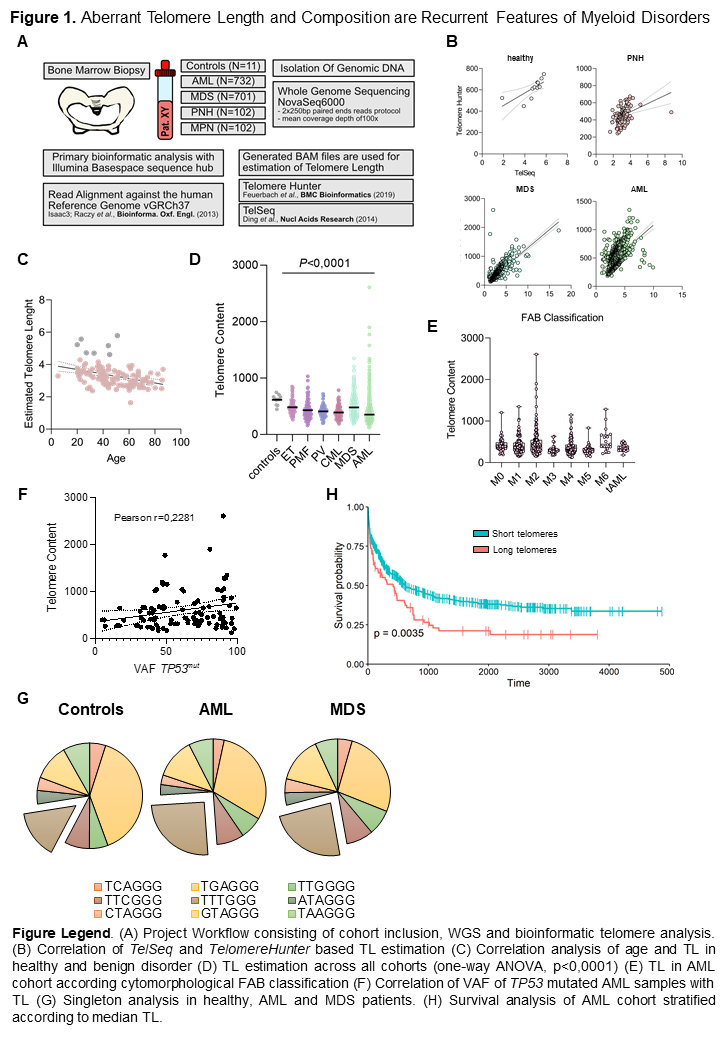