Background: Given the approval of a vast array of potent therapies and treatment combinations in multiple myeloma, it is important to understand outcomes of patients who relapse and/or become refractory to these commonly used drugs such as proteasome inhibitors (PI), immunomodulatory agents (IMiD), and CD38 targeting monoclonal antibodies (MoAB; ie. daratumumab). This study aims to describe clinical characteristics and progression free survival (PFS) after failure of at least 1 PI and IMiD +/- daratumumab in US community practice to provide context for the outcomes of RRMM patients after exposure to at least three lines of anti-myeloma therapies.

Methods: Data analyzed were from electronic health record (EHR) generated by Flatiron Health (New York, NY). These data represent over 280 cancer clinics representing over 2 million active patients treated at primarily community-based hematology/oncology practices in the US. Inclusion criteria included adult patients ≥18 years with a diagnosis of MM, at least two clinic visits after 2015, failure of a PI and IMiD, ECOG ≤2, adequate hematologic/renal/hepatic function, and no stem cell transplant within three months of study entry. Study eligibility began as early as treatment initiation in ≥ fourth line (4L+) from January 2015 through March 2020. Progression free survival was measured from treatment until death, progression, or start of new line of therapy, and PFS was estimated for patients who were eligible for study inclusion (index date) between 2015-2018. Last follow-up occurred at March 2020.

Discussion: In this study with majority of patients having 3-4 prior lines of treatment, short PFS was observed for RRMM patients regardless of prior daratumumab exposure. Strikingly, many patients received re-treatment with a drug they had previously failed, suggesting many patients may have run out of effective therapies to utilize. Additionally, the daratumumab exposed group had a higher proportion with prior transplant which may also lead to differential outcome between these groups. Overall, these data suggest that these patients have poor outcomes and the need for effective novel classes of therapies remains high within the US community practice setting. 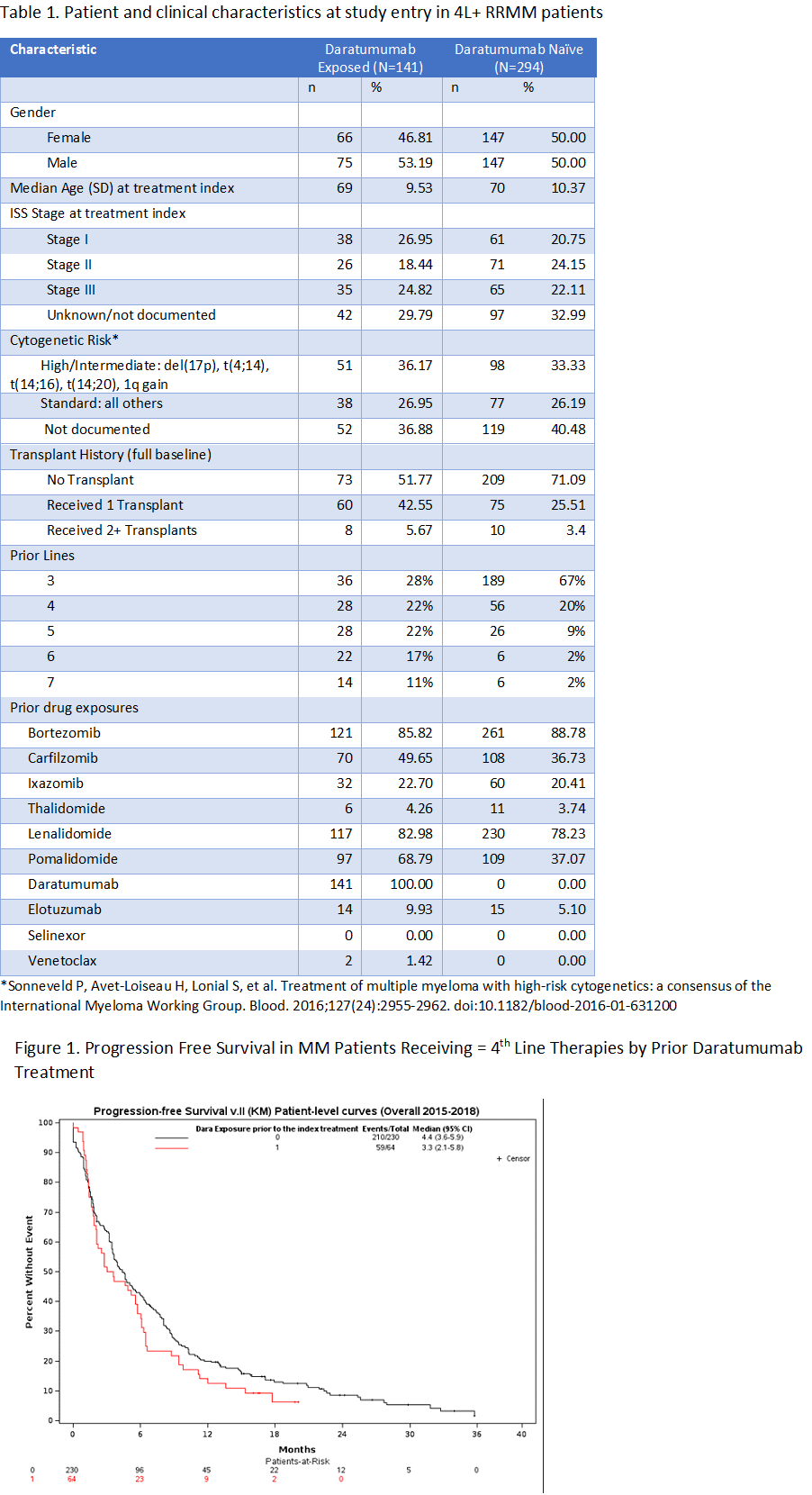