Myeloproliferative neoplasms (MPNs) are clonal hematological malignancies, which are initiated and maintained by a pool of malignant long-term hematopoietic stem cells (LT-HSCs). A recurrent gain-of-function mutation in JAK2-V617F (VF) is present in a majority of patients with MPN. Treatment with pegylated interferon alpha (pegIFNα) is currently the only therapy known to reduce JAK2-V617F+ LT-HSCs and to induce a complete molecular remission (CMR) in a subset of patients. Long-term follow-up studies suggested, that patients with additional mutations in epigenetic modifiers, such as DNMT3A, have poorer responses to pegIFNα and are less likely to achieve CMR. We therefore hypothesized that DNMT3A loss leads to alterations in JAK2-V617F HSCs functions conferring resistance to pegIFNα treatment.

To test the hypothesis we performed competitive transplantations of bone marrow cells from VF or VF;Dnmt3a-/- mice, which also co-express the GFP reporter mixed with wildtype competitor (WT) cells in 1:20 ratio (Figure 1A). After 6 weeks, recipients mice were randomized and treated for 16 weeks with mouse pegIFNα (25µg/kg; s.c.; once per week) or saline (Figure 1A). Complete blood counts and GFP chimerism monitored every 4 weeks showed, that pegIFNα was able to achieve normalization of peripheral blood parameters and reduce GFP chimerism in both, VF and VF;Dnmt3a-/- chimeric mice. In VF chimeric mice treated with pegIFNα we observed a significant reduction of splenomegaly (Figure 1B) and normalization of bone marrow MPN histopathology compared to saline, however pegIFNα treatment in double-mutant VF;Dnmt3a-/- did not improve histopathological features and had tendency to worsen splenomegaly.

GFP chimerism in LT-HSCs and committed hematopoietic progenitors was reduced only in VF chimeric mice, but not in double mutant mice. Chronic activation and ensuing replication-induced DNA damage is a critical factor for the functional decline and depletion of mutant LT-HSCs upon treatment with pegIFNα. Our functional analysis shows that LT-HSCs and early progenitors from double-mutant VF;Dnmt3a-/- mice were less prone to accumulate reactive oxygen species, DNA damage and exit dormancy upon treatment with pegIFNα, compared to VF (Figure 1B).

Overall, our results demonstrate that loss of Dnmt3a mitigate functional attrition of JAK2-V617F+ LT-HSCs upon chronic pegIFNα treatment and create vastly expanded pool of resistant LT-HSCs and point towards possible detrimental effects of pegIFNα therapy in patients with additional loss-of-function mutation in DNMT3A. 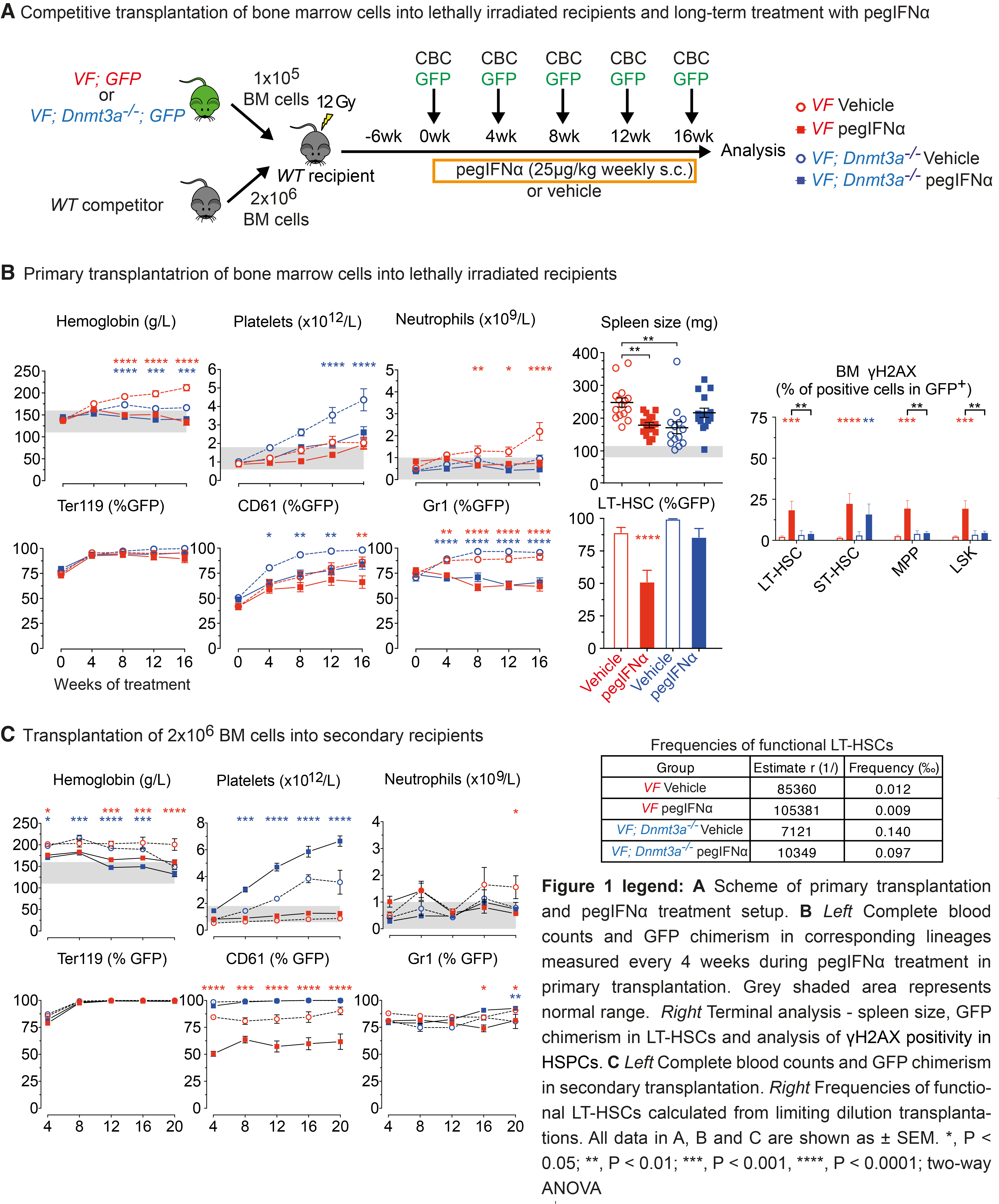