Background. Warm antibody autoimmune hemolytic anemia (wAIHA) is a rare disorder that can be potentially serious. In wAIHA, autoantibodies react with protein antigens on red blood cells (RBCs) at body temperature, leading to RBC phagocytosis and destruction by Fcg receptor-bearing macrophages in a spleen tyrosine kinase (SYK) dependent signaling pathway (see figure). Fostamatinib is a potent oral SYK inhibitor, approved for the treatment of chronic immune thrombocytopenia (ITP). Fostamatinib prevents platelet destruction in ITP through inhibition of SYK-dependent platelet phagocytosis by Fcγ receptor-bearing macrophages. Fostamatinib was evaluated in a phase 2, open-label, multicenter study (NCT02612558) for the treatment of wAIHA. Results of the study demonstrated that 11 of 25 (44%) patients had markedly improved hemoglobin (Hgb) levels after fostamatinib treatment. Adverse events (AEs) were consistent with those in the fostamatinib safety database of >4000 patients across multiple diseases. Based on the results of the phase 2 study, a phase 3 randomized, double-blind, placebo-controlled, global study (NCT03764618) was initiated to investigate the safety and efficacy of fostamatinib in patients with wAIHA.

The phase 3 study began enrolling patients this year and intends to enroll approximately 90 patients at 103 sites in 22 countries across North America, Europe, and Australia. This is the first randomized, double-blind, placebo-controlled, phase 3 study to evaluate a SYK inhibitor for the treatment of wAIHA (see diagram).

Eligible patients will be randomized 1:1 to fostamatinib or placebo for 24 weeks. Randomization will be stratified by concomitant steroid use and severity of anemia at baseline. The starting dose of fostamatinib is 100 mg BID and will be increased to 150 mg BID at Week 4, based on tolerability. The dose may be reduced in the event of dose-limiting AEs. At screening, patients may continue selected concurrent wAIHA therapies including steroids (maximum of 2 therapies) throughout the 24-week study period. A steroid taper protocol will allow reduced used of steroids in patients who have a hemoglobin response. Rescue therapy will be allowed as needed. Patients who complete the phase 3 study can rollover to an open-label extension study.

The efficacy endpoints will include hemoglobin response, defined as a hemoglobin level ≥10 g/dL with a ≥2 g/dL increase from baseline (Day 1) in the absence of rescue therapy; duration of hemoglobin response; and the need for wAIHA rescue treatment. The safety endpoints will include the incidence of adverse events. Patients will be evaluated in the clinic, including safety and laboratory assessments, at two-week intervals.

Statistics: A sample size of 90 subjects (randomized 1:1) would be required to provide 80% power to detect a difference in the response between the active and placebo groups using the Cochran-Mantel-Haenszel test at a two-sided significance level of 0.05 (based on results of the phase 2 study). The response rate will be compared between groups using a chi-square test adjusted for randomization stratification factors.

Current enrollment status: As of July 2, 2020, 83 sites are open to screening (subject to local regulations about the COVID-19 pandemic), and 43 patients have been randomized. Most patients (88%) had primary wAIHA, 12% had secondary disease including chronic lymphocytic leukemia, monoclonal B cell lymphocytosis, scleroderma, smoldering Waldenström’s macroglobulinemia, and systemic lupus erythematosus in 1 patient each. The median age at baseline is 61 years (range 28-87), and 63% are female. 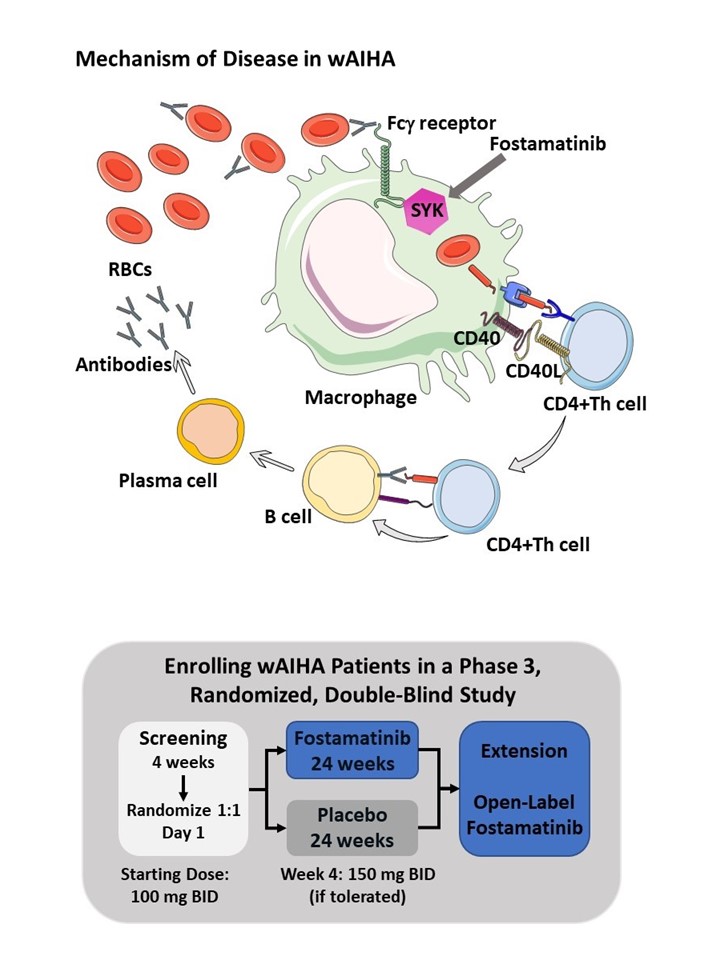