1143 Outcome By Primary Treatment Type and Timing of Progression Among Follicular Lymphoma Patients: A Large, Population-Based Study in Sweden

Purpose: Follicular lymphoma (FL) is generally regarded as an indolent malignancy, yet the clinical outcome is highly variable. In recent years, POD24 (progression of disease within 24 months) has emerged as a potential prognostic marker for overall survival (OS) in FL and other non-Hodgkin lymphomas. The association with survival, however, has mostly been studied in selected clinical trial cohorts and among patients treated with R-CHOP. We aimed to investigate OS by timing of progression and type of primary treatment in a population-based setting in Sweden.

Methods: We identified all patients diagnosed with FL in stages II-IV and grade 1-3a between 2007 and 2014, using the population-based Swedish lymphoma register. Data were complemented with information on progression, transformation and second-line treatment through medical charts review up to December 31st, 2017. The analysis covered 4 out of 6 health care regions (75% of all patients diagnosed nationally). The patients were categorized according to type of first-line treatment: R-chemo of any type, R-Benda, R-CHOP (including R-CHOEP), or other (including immunotherapy only). Among patients where it was decided to start first-line treatment within 6 months of diagnosis (and where treatment was started within nine months), POD was defined as either lack of response to first-line therapy (stable [SD] or progressive disease [PD]), or initial response and subsequent relapse/progression/transformation as indication for second-line therapy. To quantify the impact of timing of POD on survival, the five-year OS conditional on either being progression-free (PF) or having experienced POD at different time points during follow-up, was estimated using a flexible parametric illness-death model.

Results: Among a total of 970 FL patients, median age at diagnosis was 66 years and patients were followed for a median of 6.4 years (range 0-12 years). The 5-year OS was 75% and progression-free survival was 59%. Six hundred (62%) patients had a first-line treatment within nine months of diagnosis and were hence analyzed further, whereas the remaining 370 (38%) patients were classified as wait-and-watch and were not analyzed further. Among the 600 treated patients, 337 (56%) had R-chemo (R-CHOP or alike (n=210), R-Benda (n=97), other (n=30)), and 263 (44%) received non-R-chemo treatment (mainly R-monotherapy, radiotherapy only, or R-lenalidomide). Patients who received R-Benda were on average older than the other groups. Among patients treated with R-chemo, those who stayed progression-free had a 5-year conditional OS above 75% regardless of PF time point. For patients who progressed, the 5-year conditional OS improved as time point of POD was prolonged (Fig 1a, left panel). Early POD (within 12-24 months) was associated with a particularly poor prognosis (5-year conditional OS below 55%). The OS improvement over time of POD was especially pronounced among R-Benda treated patients (Fig 1b, right panel). Among patients receiving non-R-chemo treatments, early POD was associated with a slightly worse 5-year OS but differences between POD and PF patients were less marked (Fig 1a, right panel). 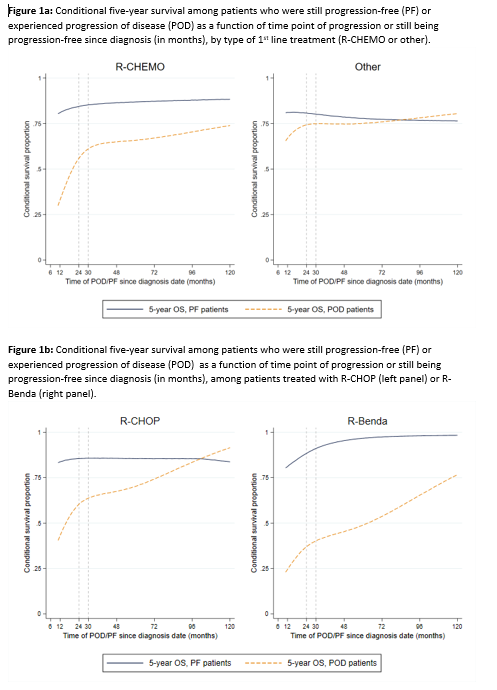