Patients with multiple myeloma are at high risk of developing venous thromboembolism (VTE) owing to patient disease and treatment including immunomodulatory drugs (IMiDs). In early 2020, the National Comprehensive Cancer Network (NCCN) adopted the IMPEDE risk assessment for VTE prevention in multiple myeloma. The guidelines on Cancer Associated Venous Thromboembolic Disease recommend using aspirin 81—325 mg in patients with low risk for VTE and low molecular weight heparin 40 mg SQ or warfarin with goal INR 2—3 in patients with high risk. A growing body of literature supports the use of direct oral anticoagulants (DOACs) in cancer patients; however, DOACs do not have sufficient evidence in multiple myeloma patients on IMiDs yet. This study aims to describe the efficacy and safety of DOACs for VTE prophylaxis in patients with multiple myeloma in comparison to other regimens in the context of the new IMPEDE strategy versus the previous NCCN VTE risk assessment by the International Myeloma Working Group (IMWG).

A single-center, retrospective, descriptive study from June 2015 to February 2019 was conducted of all multiple myeloma patients on IMiDs at the center. Primary endpoints are (1) the 6-month rate of symptomatic VTE and (2) major and clinically relevant bleeding. Secondary endpoints are (1) assessment of risk factors associated with VTE and bleeding and (2) comparison of two VTE risk assessment tools for myeloma patients: IMPEDE versus IMWG. Chi-square test was used to compare four VTE prophylaxis regimens: aspirin, low molecular weight heparin (LMWH), warfarin, and DOACs. Multivariable logistic regression models were used to assess predictors of VTE and bleeding events.

Of 203 patients, 200 were included in adherence analysis. Primary analysis included a total of 334 prophylactic regimens during treatment with IMiDs: 160 aspirin, 51 LMWH, 42 warfarin, and 81 DOACs. There was no significant difference in VTE (p=.0525) or bleeding events (p=.6910) among the four groups. Subgroup analyses on high risk patients using either the IMWG scoring tool (N=193) or IMPEDE VTE scoring tool (N=197) demonstrated that DOACs have significantly less risk for VTE events (p=0.0048 and p=0.0056, respectively).

In a multivariable regression model, BMI >25 kg/m2 and prechemotherapy WBC >11K have shown significant association with VTE events. A history of atrial fibrillation was protective against VTE, a result of previously initiated anticoagulation. The study was not powered for history of VTE prior to starting therapy. In a multivariable regression model for bleed events, age >80 and concurrent use of NSAIDS were also found to be significantly associated with bleed events.

Use of DOACs as a VTE prophylaxis regimen in multiple myeloma patients taking IMiDs was found to be as safe as other recommended prophylactic regimens with a trend towards improved efficacy. The IMPEDE risk assessment, recently adopted by the NCCN, categorized nearly all of our patients on IMiDs as high risk, thus questioning its utility. In addition, we found key determinants of bleeding risk. Our data provide a novel strategy for VTE prevention in myeloma: To anticoagulate all patients on IMiDs except those at risk for bleeding. 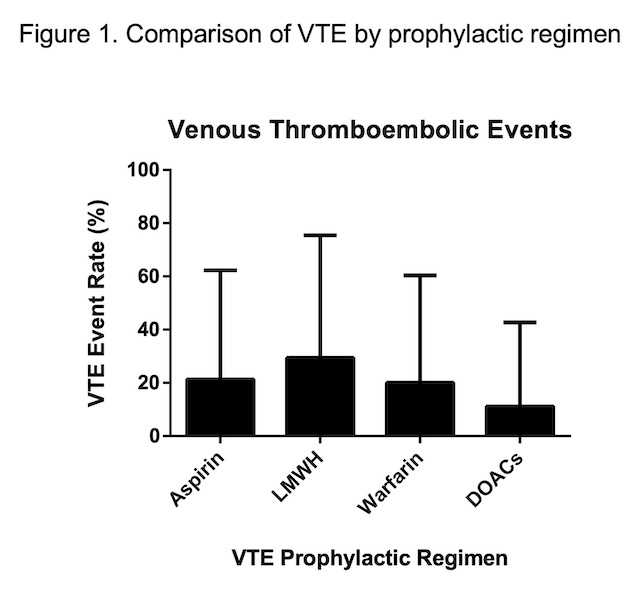