Introduction: Anti-CD38 monoclonal antibodies have led to improved response rates, progression-free and overall survival in randomized clinical trials (RCTs) of multiple myeloma (MM) patients. However, CD38 is expressed on both malignant and normal plasma cells, so anti-CD38 therapy can lead to hypogammaglobulinemia (HGG). Already present at baseline in many MM patients, HGG can increase the risk of infections. In RCTs, daratumumab containing arms have been associated with an increased risk of infections, particularly in the respiratory tract. To date, there have been no studies on interventions to reduce this risk. In this retrospective case-crossover study of patients receiving daratumumab, we compared the rates of infection while on and off intravenous immunoglobulin (IVIG) replacement therapy.

Methods: We retrospectively identified consecutive MM patients who received at least 3 doses of IVIG while receiving daratumumab. Patients served as their own controls and time periods were divided between 'ON IVIG', defined as within 30 days of last IVIG administration, and observation periods ('OFF IVIG'). The evaluation period for each patient began at the time of first daratumumab dose and ended 6 months after the last dose to account for lasting effects. HGG was defined as IgG< 700 mg/dL for non-IgG MM, and [IgG – M-spike mg/dL] < 700 mg/dL qfor IgG MM to account for the nonfunctional, monoclonal IgG. Infections were identified by new antimicrobial prescriptions and microbiological data. Baseline characteristics, infections during daratumumab treatment along with concurrent MM treatments and labs were collected. The primary outcome was annualized rate of infection ON IVIG vs OFF IVIG, with a secondary outcome comparing rates of grade 3-5 infections (per Common Terminology Criteria for Adverse Events v5.0). Generalized Estimating Equations with a log link function and Poisson distribution were used to compute incidence rate ratios (IRR) and the corresponding 95% confidence intervals to compare infection rates between ON and OFF IVIG periods.

Results: 43 patients met the inclusion criteria. Baseline characteristics are listed in Table 1. Median age was 66 years (range, 37-85) and 44% were female. 37%/21% had light chain only/IgA MM, 46% had high-risk cytogenetics, and patients had a median of 2 prior lines of therapy (range, 0-9), with broad prior exposures to common MM agents. 56% had prior autologous stem cell transplant at a median of 35 months (range, 3-153) prior to daratumumab therapy. The median number of infections in the 12 months preceding daratumumab was 2 (range, 0-6). The median functional IgG at the start of daratumumab was 566 mg/dL (range, 115-1108 mg/dL).

There were a total of 176 infections during the evaluation period, most commonly in the upper respiratory tract (53%) and lower respiratory tract (35%). There were no deaths due to infections. The median time to first infection on daratumumab was 2.5 months (range, 0.1-18.7); at which time the median absolute neutrophil and lymphocyte counts were 2.8 and 0.9 x103/uL respectively.

Discussion: Use of IVIG during daratumumab treatment for MM was associated with a 39% reduction in all infections and a 72% reduction in serious (grade 3-4) infections. Despite the small cohort, the results are highly statistically significant. While the case-crossover design allows each patient to serve as an internal control, this study is limited by its retrospective nature, and IVIG was initiated at the discretion of the treating physicians. While additional retrospective or, preferably, prospective studies are needed to confirm these findings, IVIG may have the potential to significantly reduce the risk of infections during treatment with daratumumab. 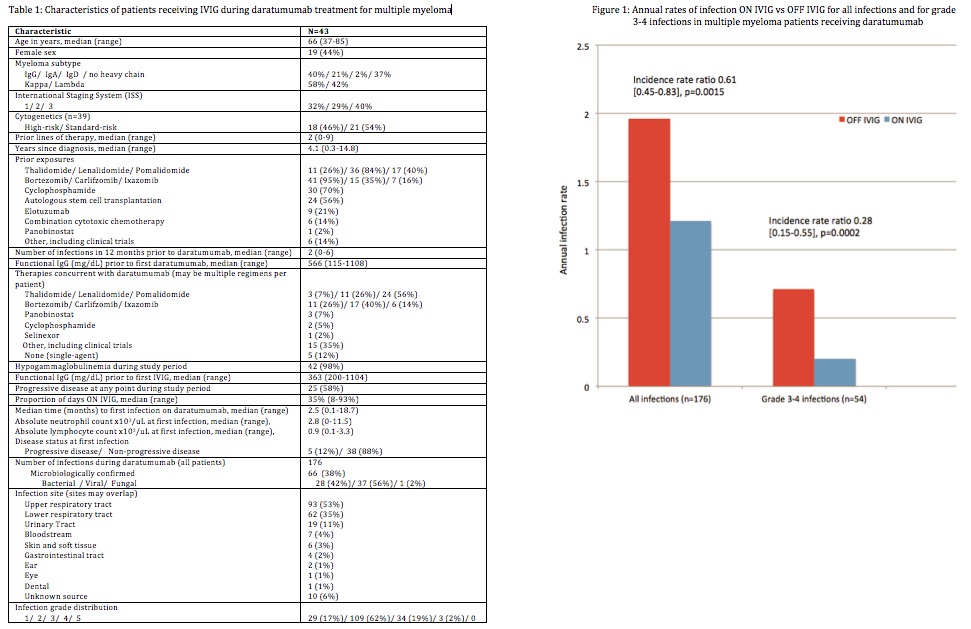