Immune thrombocytopenia (ITP) is an acquired autoimmune disorder characterized by a platelet count < 100 x 109 / L due to accelerated platelet destruction and impaired platelet production (McMillan 1981). At present, there are 3 available thrombopoietin receptor agonists (TPO-RAs) approved for treatment of chronic ITP in adults. All three agents have high response rates, 40-90%, depending on the criteria used to define response (Ghanima et al 2019). Previous studies illustrate efficacy of Romiplostim and Eltrombopag having surprisingly high response rates when switching from one to the other, particularly if there was a response to the first TPO-RA (Gonzalez-Porras et al 2015; Lakhwani et al 2017; Cantoni et al 2018) but no studies have compared all 3 approved TPO-RA. Herein we describe 7 patients with difficult to treat chronic ITP who received all 3 TPO-RA and assess responses of the 7 to each of Eltrombopag, Romiplostim and Avatrombopag.

This was a retrospective review of all patients with chronic ITP seen at the Platelet Disorders Program at Weill Cornell Medicine-NY Presbyterian Hospital between July 2019 (following FDA approval of Avatrombopag) and June 2020 who had been treated with Eltrombopag, Romiplostim and Avatrombopag. Seven patients were identified (most had been followed for many years) and information collected on demographics, laboratory results, and clinical data including response and tolerance to ITP treatments, in particular the 3 TPO-RA.

There were 4 females and 3 males with median age of 64 years (range 33-77). All had primary ITP with median 3 (range 2-13) separate ITP treatments, including investigational therapies, preceding treatment with their first TPO-RA (Table 1). All 7 patients had difficult to treat ITP with episodes of severe thrombocytopenia despite chronic treatments, requiring periodic rescue with IVIg and/or steroids. Three patients received Eltrombopag as their first TPO-RA and 4 patients Romiplostim. All 7 patients received Avatrombopag as their third TPO-RA and all also received other therapies either in conjunction with or in between TPO-RAs (Figure 1). No patient went directly from one TPO-RA to another without intervening treatment.

All 7 patients (100%) responded to their first TPO-RA. For the 3 initially on Eltrombopag, duration of treatment ranged from 1 week to 8 years. When these 3 were switched to Romiplostim as a second TPO-RA, they responded with median time on treatment 27 months (range 21-48 months). Reasons prompting the switch from Eltrombopag to Romiplostim included: lost response (1), allergic reaction (1), insurance/financial issues (1).

Prior to taking Avatrombopag, 5 patients returned to a TPO-RA they had previously responded to with 3 requiring higher doses on re-exposure. These patients (4, 6, 7) had switched from that initial agent due to patient preference (1), financial issues (1) and unstable platelet response (1). Five/7 patients (71%) responded to the third TPO-RA, Avatrombopag. Reasons prompting the switch to Avatrombopag from the previous TPO-RA included: patient preference (4), lost response (2), unclear/suboptimal response (1). The 5 responders remain on only Avatrombopag with durations of 3 months to 11 months.

All 7 patients responded initially to TPO-RA whereas response rates of around 70% were seen when patients are switched to a second and subsequent third TPO-RA; response was very good to all 3 agents without clear preference of one over the others. Responders to distinct second and third TPO-RAs included patients who switched due to lack of response to a preceding TPO-RA as well as those who switched due to preference (for an oral agent without dietary restrictions) or intolerance/side effects. Loss of response to one TPO-RA should not preclude trying another. Patients may not respond as well on re-exposure to a previously seen TPO-RA; hence, ideally treatment would be maintained if possible with the initial agent. 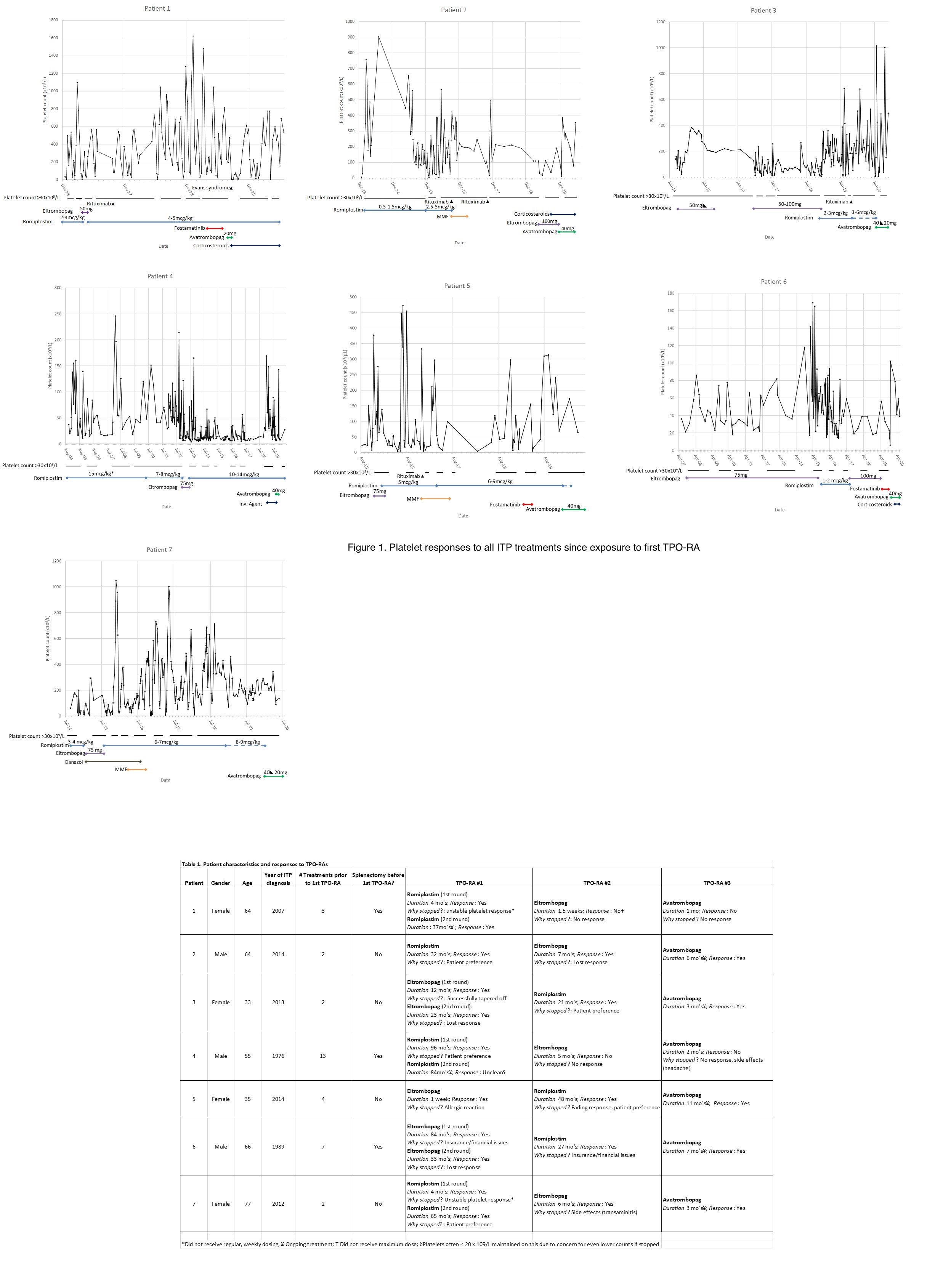