1130 Clinical Activity of TG-1701, As Monotherapy and in Combination with Ublituximab and Umbralisib (U2), in Patients with B-Cell Malignancies

TG-1701 is a covalent Bruton’s tyrosine kinase (BTK) inhibitor with improved selectivity when compared with ibrutinib. Of note, the combination of TG-1701 with “U2” (the glycoengineered anti-CD20 monoclonal antibody ublituximab and the PI3Kδ-CK1ε dual inhibitor umbralisib) reduced the tumor growth of ibrutinib sensitive (REC1) and ibrutinib resistant (UPN-1res) mouse models of mantle cell lymphoma (MCL). TG-1701 combined with U2 increased infiltration of macrophages and NK cells promoting thereby immune response in the tumor microenvironment (Abstr 2205, AACR 2020). Herein we report clinical data of TG-1701 monotherapy and TG-1701 in combination with U2.

Patients with a range of relapsed/refractory (R/R) or treatment naïve (TN) B-cell malignancies were enrolled to an ongoing Phase 1 study first evaluating escalating doses of oral TG-1701 once daily (QD), continuously administered in 28-day cycles (100, 200, 300, and 400 mg). After characterizing the safety profile of TG-1701 monotherapy, we opened a parallel dose escalation (DE) arm of TG-1701 plus U2 (1701+U2). Select dose levels of TG-1701 monotherapy were also expanded to better characterize safety and efficacy in patients with chronic lymphocytic leukemia (CLL), MCL and Waldenström's macroglobulinemia (WM). All patients were treated until disease progression, unacceptable toxicity, or investigator/patient decision to withdraw.

TG-1701 was well tolerated and the maximum tolerated dose was not reached up through 400 mg QD, with DE proceeded until 3 dose levels above complete BTK occupancy (≥ 99% occupancy observed at 100 mg QD). One dose-limiting toxicity was observed, a grade (G)3 ALT increased at 400 mg QD monotherapy. This event was transient, the patient remained asymptomatic with normal liver function, and continued treatment at a reduced dose of 300 mg QD. The most common G≥3 treatment-related adverse events (TRAE) were neutropenia (5%) on monotherapy, and neutropenia and ALT/AST increased for 1701+U2 (both 21%). There were no G4 TRAE with TG-1701 monotherapy. Among all-causality AEs of special interest, atrial fibrillation occurred in 4 patients (4%), G≥3 hypertension occurred in 1 patient (1%), and bleeding events (e.g. bruising, petechiae) occurred in 22 patients (22%, all G1-2). No cases of ventricular tachyarrhythmia have been reported. There have been no treatment-related deaths nor treatment discontinuations due to AEs. Linear kinetics are apparent, evidenced by approximately dose proportional increase in exposure.

TG-1701 was safe and effective in patients with B-cell malignancies and demonstrated near 100% saturation of the BTK at all dose levels studied. Monotherapy shows a low incidence of off-target adverse events. The combination of 1701+U2 has shown promising clinical activity and enhanced depth of response over TG-1701 monotherapy with no additional toxicity in patients with B-cell malignancy. Recruitment to this study (NCT03671590) continues. 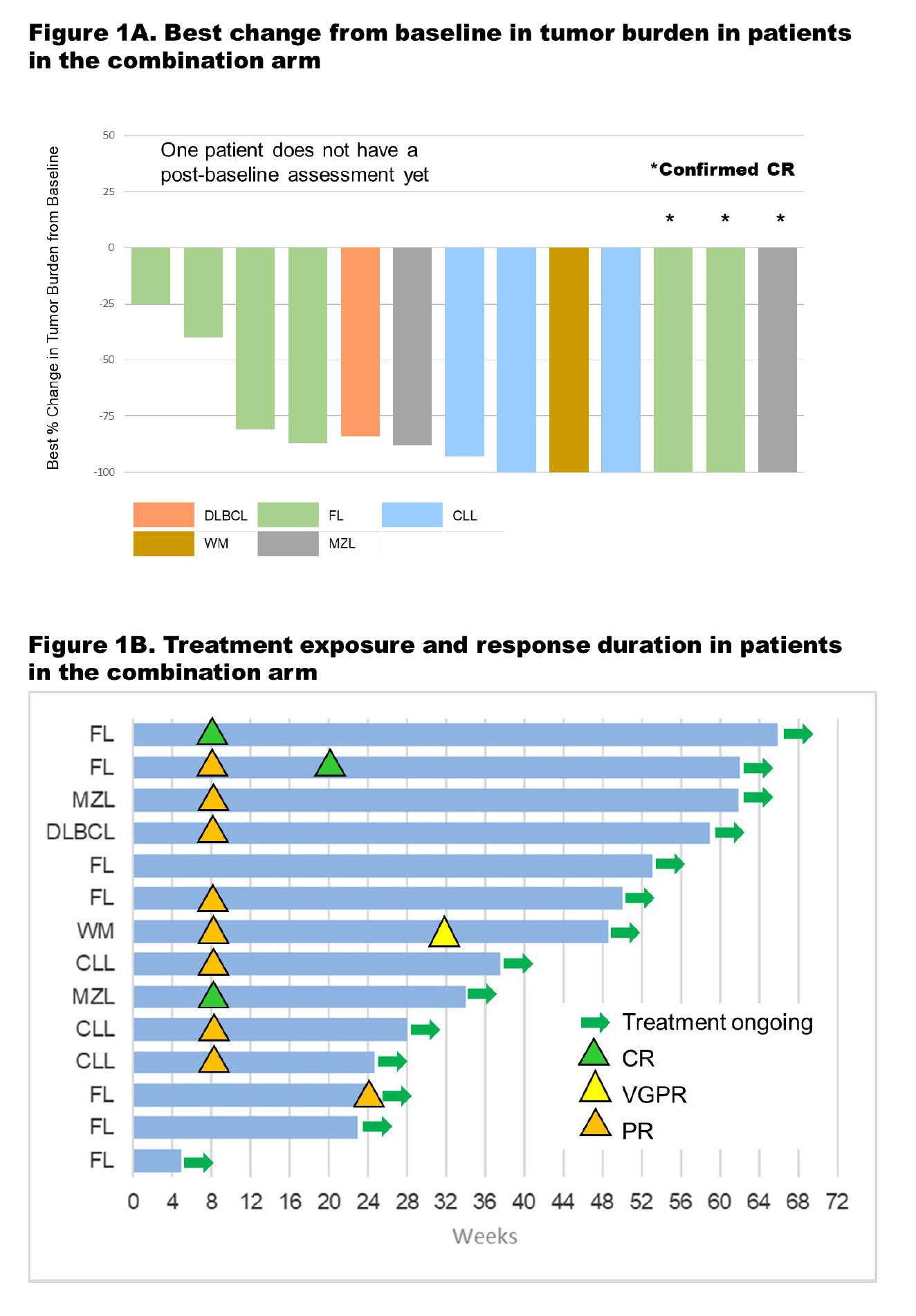