Aiming to potentiate the tafasitamab-mediated “eat me” signal, we tested a combination with a CD47-directed monoclonal antibody (mAb) to inhibit the CD47/SIRPα “don’t eat me” signal and further enhance macrophage-mediated phagocytosis. Preclinical studies demonstrated that blocking the CD47/SIRPα checkpoint in combination with antibodies, such as rituximab, increased phagocytosis by macrophages, resulting in effective anti-tumor effects in non-Hodgkin lymphoma (NHL) (Chao, et al. 2010). Additionally, the combination of the anti-CD47, magrolimab, and the anti-CD20, rituximab, demonstrated beneficial outcomes for patients with refractory NHL (Advani, et al. 2019).

Here, we present in vitro and in vivo data on the combinatory effect of tafasitamab and an anti-CD47 mAb in preclinical models of Burkitt’s lymphoma (BL).

During in vitro studies, CD14+ monocytes were isolated from the whole blood of healthy volunteers and differentiated with 50 ng/mL M‑CSF for 6 days. ADCP was analyzed by flow cytometry in co-culture experiments with Ramos cells (BL) after 3 hours of treatment with tafasitamab and anti-CD47 mAb (clone B6H12).

In vivo, the combination of tafasitamab with an anti-CD47 mAb was tested in a Ramos disseminated survival and subcutaneous tumor model in SCID and NOD-SCID mice, respectively. In both models, tafasitamab was administered therapeutically twice a week either at 3 mg/kg (disseminated) or 10 mg/kg (subcutaneous) for max. 4 weeks. The anti-CD47 mAb was administered at 4 mg/kg three times per week. Main study readouts were to assess animal survival and any delays in tumor growth.

Additionally, pronounced anti-tumor efficacies were detected in the Ramos subcutaneous tumor model. Here, the combination resulted in a significant delay in tumor growth compared with the tafasitamab or anti-CD47 mAb monotherapies (ILS >175% tafasitamab and ILS >72% anti-CD47 mAb vs tafasitamab + B6H12) (Figure 1B). 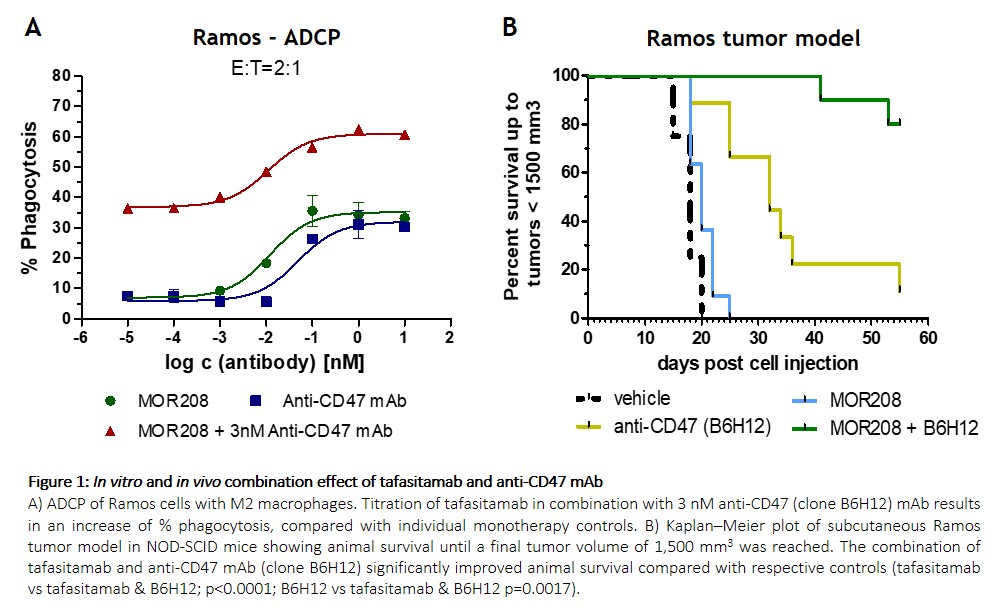