353 Belumosudil for Chronic Graft-Versus-Host Disease (cGVHD) after 2 or More Prior Lines of Therapy: The Rockstar Study (KD025-213)

Introduction: Belumosudil (KD025) is a novel oral selective rho-associated coiled-coil kinase 2 (ROCK2) inhibitor specifically designed for the treatment of cGVHD, an immune-mediated inflammatory and fibrotic disorder. In a previous dose-finding study (KD025-208, N=54), two-thirds of patients, including those with fibrotic and inflammatory manifestations, achieved a partial or complete response with belumosudil. Herein, we report on the top-line results (6 months after the last patient in) from the pivotal phase 2 trial (ROCKstar [KD025-213], N=132).

Results: At enrollment, the median age was 56 years, the median time from cGVHD diagnosis to enrollment was 29 months, 67% of patients had severe cGVHD, 52% had ≥4 organs involved, 72% had received ≥3 prior LOT (including ibrutinib [n=46] or ruxolitinib [n=38]) and 73% were refractory to their last LOT. The baseline characteristics of both arms were well balanced.

The median time to response was 4 weeks. Of responders, 49% have maintained response for ≥20 weeks. The median DOR has not yet been reached. Clinically meaningful improvement (≥7-point reduction) in LSS score on consecutive assessments was observed in 39% and 33% of patients in the QD and BID groups, respectively. Both responders (43%) and nonresponders (17%) experienced a clinically meaningful improvement in LSS score.

Belumosudil was well tolerated, with >95% relative dose intensity in 83% of patients. Drug discontinuation occurred in 10% of patients due to possible drug-related adverse events (AEs), 3% due to progression of underlying disease and 12% due to progression of cGVHD. AEs were consistent with those expected in patients with cGVHD receiving CS and other immunosuppressants (Table 2). Common AEs included fatigue (32%), diarrhea (29%), nausea (26%), cough (24%), dyspnea (24%), upper respiratory tract infection (23%), peripheral edema (21%) and headache (20%). At least 1 serious AE occurred in 34% of patients. Twenty-three percent of patients had at least 1 liver-related investigation; the most common was increased gamma-glutamyltransferase (11%), and only 1 patient showed an increase in bilirubin. Eight patients died during the study; 5 due to AEs (1 possibly related to belumosudil) and 3 during long-term follow-up (>28 days after last dose). There were no reports of cytomegalovirus reactivation or infection.

Conclusion: Treatment with belumosudil at both doses resulted in high ORRs across key subgroups, meeting the primary end point of this pivotal randomized trial in cGVHD. Responses were durable and clinically meaningful, irrespective of patient and cGVHD characteristics, and were seen in patients who previously received ruxolitinib and ibrutinib. Belumosudil was well tolerated, with limited and manageable AEs. Further studies will evaluate its use earlier in disease management. The 12-month data analysis will be presented at ASH 2020. 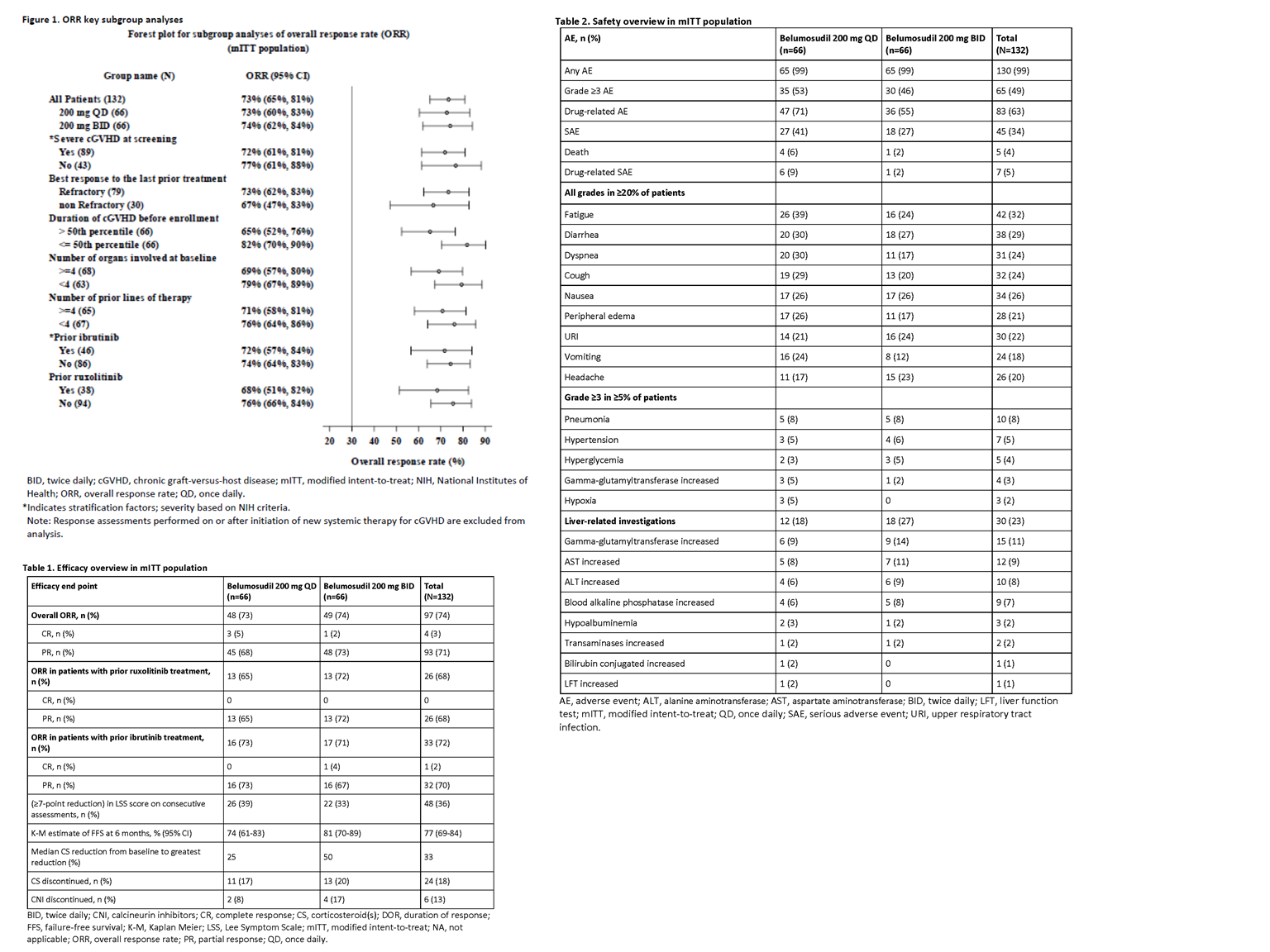