Background: Venous return from the lower extremities is pumped upwards to the right side of the heart in a process that is facilitated by one-way valves and the venous muscle pump, of which the calf muscle pump is a major contributor1-3. Venous plethysmography can quantitatively assess calf pump function (CPF). The association between the CPF and venous thromboembolism (VTE) has not been investigated.

Methods: Venous plethysmography (VP) data (strain gauge or air plethysmography) from the Mayo Clinic Vascular Lab database (1998-2015) of CPF (bilaterally reduced, unilaterally reduced, and bilateral normal) were examined in Olmsted County Residents. The Rochester Epidemiology Project (REP) captures the population of Olmsted County and contains demographic information, medical diagnoses, hospital admissions, and surgical procedures as well as validated VTE events and death. Patients with signs of obstructed outflow in either extremity on the venous plethysmography (a possible sign of acute or chronic deep vein thrombosis) study were excluded. Patients with a history of VTE diagnosed before the physiologic study were also excluded. If more than one measurement of calf muscle pump function was performed, only the first measurement was used. The primary outcome was a composite of any VTE, including proximal and distal deep vein thrombosis (DVT) and pulmonary embolism (PE).

Conclusion: In this population-based study of Olmsted County residents with no prior VTE, rCPF function as measured by venous plethysmography is associated with increased risk for VTE, particularly lower extremity proximal DVT. More research is required to understand what additional measures of venous physiology influence these findings and whether CPF could be used in VTE risk stratification. 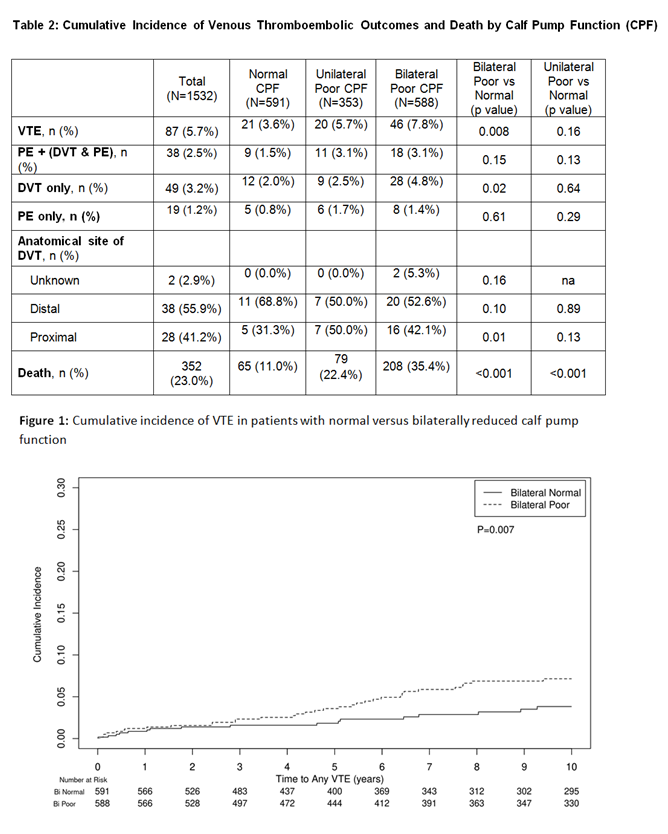