Introduction: The outcome of patients (pts) with myelofibrosis (MF) who discontinue ruxolitinib (RUX) is poor with scarce therapeutic possibilities (Palandri et al, 2020). However, some evidences suggest that pts may respond to a rechallenge of RUX after drug stop (Gerds et al, 2018).

Methods: After IRB approval, a clinical database was created in 20 European Hematology Centers including now retrospective data of 703 MF pts who started RUX from Jan 2011 to Nov 2019. Only chronic phase (CP) pts who stopped RUX for ≥14 days and survived ≥30 days after discontinuation were included. A specific survey collected clinical/laboratory data at RUX stop and at rechallenge, reasons for discontinuation and treatments before rechallenge. OS was estimated from the date of the first/only RUX discontinuation to last contact (log-rank test).

During RUX stop, 65% of RUX-again pts did not receive any therapy, 15% received only palliation (steroids, hydroxyurea), while 11.7% switched to investigational agents, 3.3% underwent splenectomy and 5% allogeneic transplantation. Compared to disease status at first RUX stop, at RUX restart there was a significant increase of pts with large splenomegaly and high TSS, while the PLT count was higher and RUX dose significantly lower (Table 1).

The median duration of RUX rechallenge was 7.5 mos (0.5-72.7). During the rechallenge, 44.6% and 48.3% pts improved spleen and symptoms, and there was a significant increase in pts with TSS reduction (p=0.01); 8 pts (13.3%) continued RUX with stable/worsening spleen size and improvement in TSS. Conversely, 26.8% and 20% of pts had increase in spleen size and in symptoms, respectively. While Hb levels remained stable, PLT count significantly decreased during rechallenge (p<0.001). At last contact, 51.7% of RUX-again pts had permanently discontinued RUX.

The reasons for temporary discontinuation had no impact on the reduction of spleen/symptoms during rechallenge and on OS. However, comparing RUX-again and RUX-stop pts, RUX-again pts showed a better OS, with a median survival of 41.1 mos and 23.7, respectively in the 2 cohorts (Fig. 1).

Conclusions: This real-world study highlights that RUX rechallenge is quite common in CP-MF pts, involving almost 30% of treated pts, particularly when the discontinuation is due to toxicity. The temporary discontinuation, while improving PLT count, generally caused a significant increase in disease burden. After rechallenge, almost 50% of pts achieved clinical responses regardless of reason of first discontinuation. This residual disease control activity, that correlated with improved OS, should be weighed up also given the new therapeutic possibilities available in these pts. 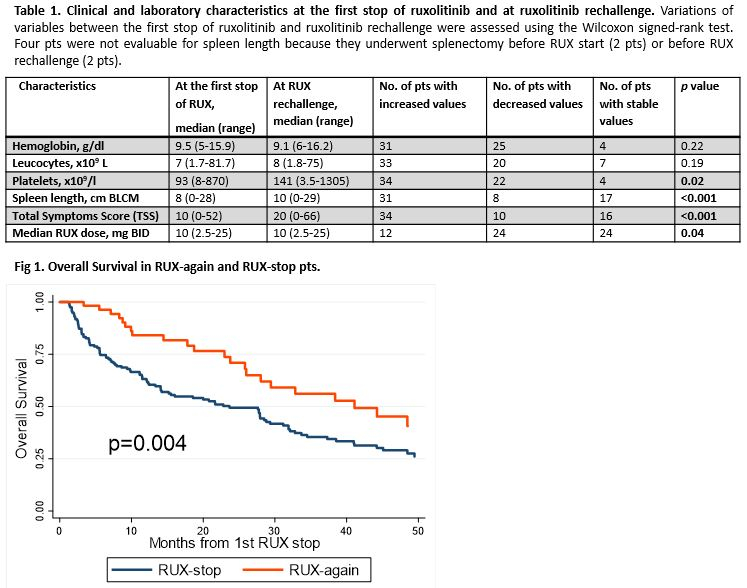