Background: Heparin-induced thrombocytopenia (HIT) is a prothrombotic, immune-mediated adverse drug reaction to the widely used anticoagulant heparin or its derivatives. HIT is associated with high rates of morbidity and mortality, principally due to thrombotic complications. HIT is caused by the formation of pathogenic antibodies to complexes of platelet factor 4 and heparin. These HIT antibodies activate the low-affinity immunoglobulin G receptor FcγRIIa on platelets, leading to platelet activation and aggregation, and consequently both thrombosis and thrombocytopenia. Procoagulant platelets are a subset of platelets that promote coagulation by providing a procoagulant surface for the generation and propagation of coagulation factors, leading to thrombin generation. Despite their clinical relevance in prothrombotic diseases, they have not been widely studied using clinical HIT samples.

Methods: Our previously established flow cytometry-based procoagulant platelet assay was modified to incorporate the addition of exogenous plasma, and performed using platelets from healthy donors screened for FcγRIIa responsiveness using light transmission aggregometry response to anti-CD9 monoclonal antibody ALB6. High responders were donors with a platelet response to ALB6 stimulation of greater than 80% aggregation and time to initiation of aggregation of less than 180 seconds, and were preferentially used in this study. Two donors were intermediate responders (platelet response of 50-80% aggregation or time to initiation of aggregation greater than 180 seconds). Frozen plasma samples were from patients with serotonin release assay-confirmed HIT (HIT+) or patients screened for HIT but negative on HIT immunoassay testing (HIT-).

Results: Plasma from patients with confirmed HIT sensitized healthy donor platelets to become procoagulant in the presence of agonists of the platelet receptors GPVI (crosslinked collagen-related peptide), PAR1 (SFLLRN) and P2Y12 (adenosine diphosphate). This sensitization was heparin-dependent, with a heightened procoagulant platelet response seen at therapeutic-dose heparin compared to no heparin, which was fully abrogated at high-dose heparin, for all three receptor-specific agonists tested. The increased procoagulant platelet response at therapeutic-dose heparin was also attenuated by the FcγRIIa functional-blocking monoclonal antibody, IV.3, indicating a requirement for active FcγRIIa. Importantly, this heparin- and FcγRIIa-dependent potentiation of procoagulant platelet formation was not seen in the presence of plasma from patients with a clinical suspicion of HIT, but who tested negative by HIT immunoassays.

Conclusion: These studies demonstrate that HIT antibodies in combination with soluble platelet agonists greatly expand the procoagulant platelet surface, which may contribute to the high thrombotic risk seen in HIT. Targeting platelet activation may thus represent a novel strategy for the treatment of HIT. Furthermore, this flow cytometry-based procoagulant platelet assay may represent a novel diagnostic strategy for rapid and accurate identification of patients with pathological platelet-activating HIT antibodies. 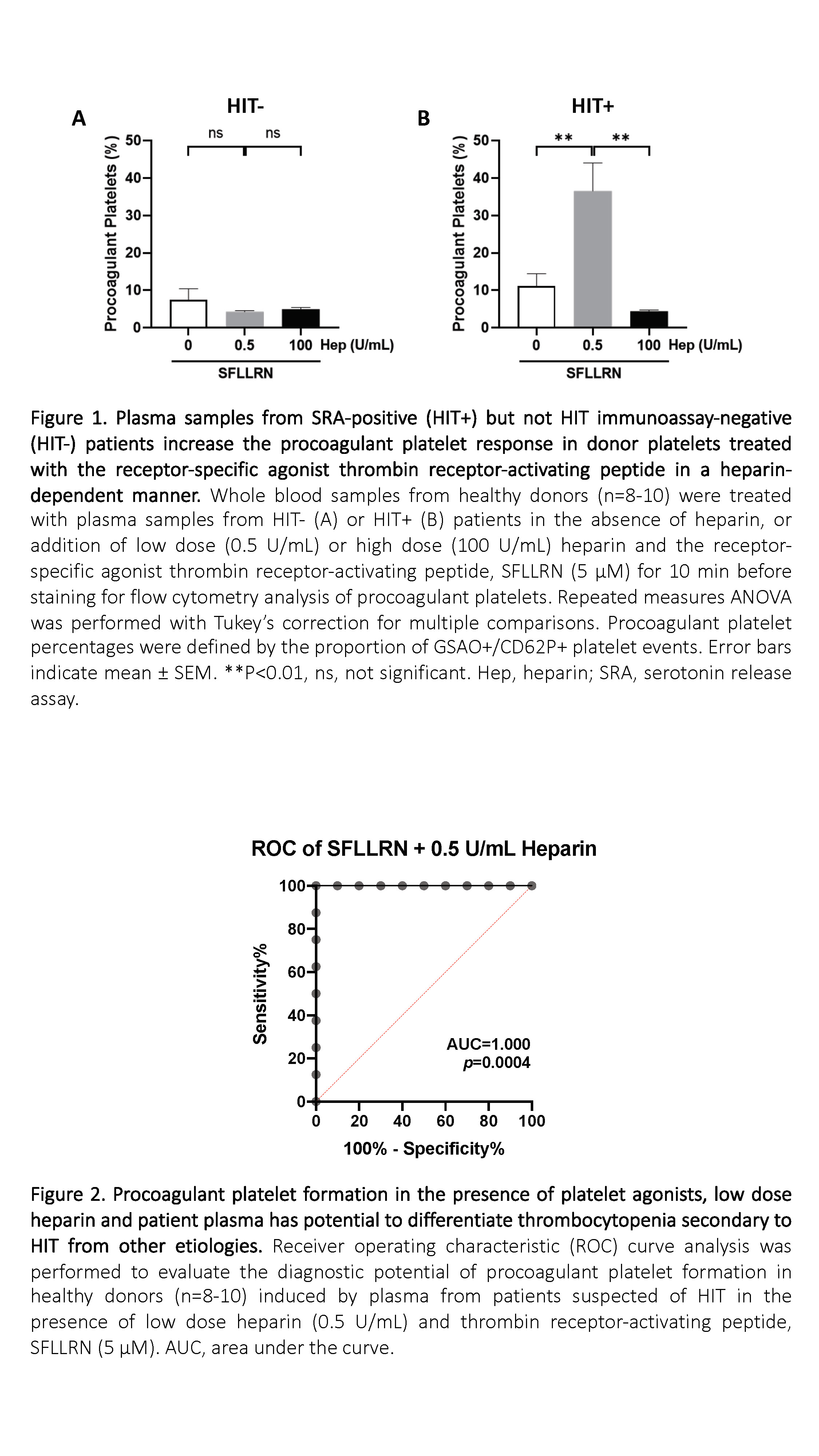