Methods: Adult patients at 3 US academic medical centers with hematologic malignancy undergoing chemotherapy or hematopoietic stem cell transplantation (HSCT) anticipated to have hypoproliferative thrombocytopenia were enrolled between June 15, 2016 and February 4, 2020. Randomization was stratified by site and therapeutic group: Chemotherapy, Allogeneic transplant, or Autologous transplant. Patients received study drug intravenously (1,000mg TXA or saline) or orally (1300mg TXA or placebo) every 8 hours beginning when the plt count was ≤30,000/µL and continued until platelet count recovery >30,000/ul or if a diagnosis of thrombosis was made. Patients were transfused prophylactically for counts of ≤10,000/µL or if indicated in the judgement of the treating physician. Daily assessments for bleeding were made by trained research staff (inpatients) or by self-assessment in a patient diary (outpatients), and by patient interview and chart review. The primary endpoint was the proportion of patients with bleeding of WHO grade 2 or above over 30 days after activation of study drug. A score test based on logistic regression was used, adjusted for study site and therapeutic group and adjusted for sequential monitoring. Multiple imputations were used to account for missing data. Secondary endpoints were number of transfusions and number of days alive without WHO grade 2+ bleeding during the first 30 days post activation of study drug.

There were no deaths due to bleeding. VOD was observed in 3/164 TXA subjects (1.8%) and 2/163 (1.2%) placebo subjects. An increase in the incidence of central venous line occlusions and the use of tissue plasminogen activator was noted in the TXA arm. (11.0% vs. 19.5% and 25.8% vs. 42.1% for placebo and TXA groups, respectively). Recurrent line occlusion led to permanent discontinuation of drug in 4.9% of TXA and 1.8% of placebo subjects. No increase in any other non-catheter thrombotic events was noted. No patient died from a thrombotic event in 120 days following activation of study drug.

Conclusions: Prophylactic TXA has no effect on the incidence of WHO Grade 2+ bleeding when given in addition to routine plt transfusions to severely thrombocytopenic patients undergoing therapy for hematologic malignancy. An increased incidence of line occlusion in the TXA arm was observed but no increase in other types of thrombotic events was detected. 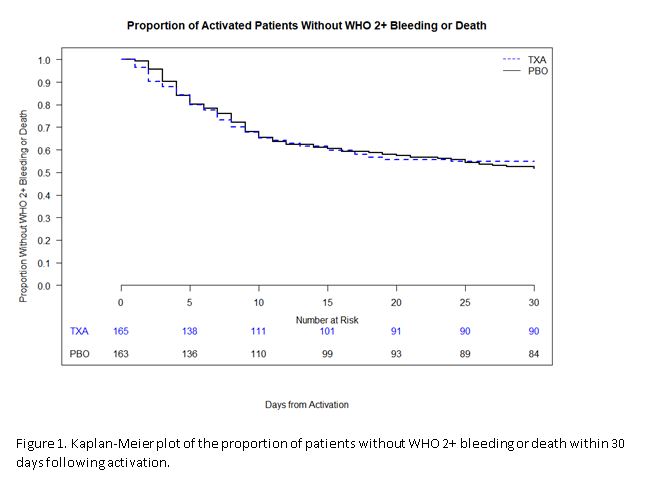 OffLabel Disclosure: Tranexamic Acid is an antifibrinolytic agent approved for treatment of bleeding in patients with hemophilia to reduce the risk of hemorrhage during and following tooth extraction. The oral form is indicated for the treatment of cyclic heavy menstrual bleeding.